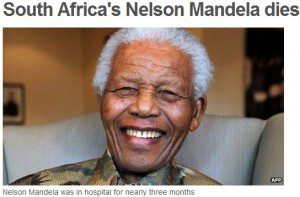 “We pray, I pray also, for the long life of South African leader, Mr Nelson Mandela who fought for such a long time to end apartheid and racial discrimination in Africa. This is not only actually an example in the African region or in the African continent. This is an example for the world community as how apartheid is a disease really for the human race, and human discrimination can be peacefully settled.”

– A Buddhist monk in the video below, where this summer, groups of Buddhist monks assembled in Bodh Gaya to offer prayers for his long life.

Global news sources are reporting the death of one of the 20th and 21st century’s great men: Nelson Mandela.

Mandela had been in the hospital for ailments related to a lung infection for several months. Read more at the BBC here (photo above from the BBC).

His success in non-violent reconciliation drew monks together from Sri Lanka, Vietnam, Thailand, and Burma (Myanmar) to pray for his long life in July. Let us hope that the the depth of his message reaches those in power in those lands, especially where ethnic and religious violence has grown in recent years.

All of us, including me, have made mistakes. But we can strive to be of service, be mindful in understanding, showing kindness, honesty and humility. These are the worthy human values we should be proud to acquire.

And by acquiring these values, we become very Christ like, Buddha , very holy.

But lest we forget, Nelson Mandela was also a man who went to prison a terrorist and stepped out 27 years later a national hero. As we look beyond the surface, the fact sheets, the time lines, we see that Mandela’s life was complicated. His struggle was at times violent, in ways that Buddhists today may or may not condone, but it was undoubtedly a struggle against an institutionalized violence far more potent and destructive. It is this institutionalized violence that rears its ugly head most clearly in nations such as Burma and Sri Lanka and too often the most vocal Buddhists are the ones supporting it.

It is also this institutionalized violence, in the way of natural and human resource exploitation in non-Buddhist countries that also has many in the West divided in debates about mindfulness vs McMindfulness, Buddhist anarchism vs Compassionate capitalism, and more. Whether and how Mandela’s memory will fit into such debates is yet to be seen. What is already clear is that his life provided profound inspiration to people around the world, including a great number of Buddhists. He will be missed. 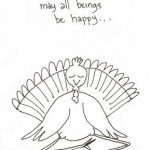 December 8, 2013 Rohatsu, Bodhi/Enlightenment Day
Recent Comments
0 | Leave a Comment
"I've read that borderline persons have a high sense of fairness and BPD is soooo ..."
steven solomon Borderline Personality Disorder and Buddhism (IV)
"I came across this site by accident, It reminded me of a story about two ..."
quacknduck Tourists: Buddha Tattoos are Taboo; as ..."
"eMudhra Limited is a certified body, licensed by the Government of India. eMudhra operates in ..."
Mycaportal Buddhism: Dzogchen and Mahamudra
"folks hav to learn the local laws wen they invade the space"
Joe Biggs Tourists: Buddha Tattoos are Taboo; as ..."
Browse Our Archives
get the latest updates from
American Buddhist Perspectives
and the Patheos
Buddhist
Channel
POPULAR AT PATHEOS Buddhist
1