Following the trend from the last couple weeks, I’m once again behind on notes (in fact week six has come and gone too). So I apologize to anyone who has followed along with the videos and these posts; but perhaps this can serve as a welcome reminder.

Speaking of reminders, last week (week four) we looked at some modular theories of the mind, which seem to be in vogue in modern psychology circles, and how they may affirm the central Buddhist tenet of not-self. In week three we looked into the Buddhist teaching on not-self and what that might mean in the world of modern psychology.

Now that we’ve seen it suggested that the modular theory of the mind dovetails with the Buddhist theory of not-self, we look at how meditation might fit in to our picture.

The first way this is discussed comes by looking at the Default Mode Network, which is the part of the brain that is active when our mind isn’t focused on anything. Brain scans have shown that meditation quiets this network. This “quieting down” process, Prof. Wright suggests, allows for greater first-person clarity about the wandering of the mind and, most importantly, a greater clarity and thus control over the feelings that arise based on certain wanderings of the mind. Feelings, we saw last week, trigger modules, which then actually change our perception of the world and our choices. This might look something like:

Stimulus (either internal via memory or external) –> without mindfulness –> thoughtless reactivity

Stimulus (either internal via memory or external) –> with mindfulness –> a meaningful choice on how to respond.

After some discussions of ‘self’ (hint, there still isn’t one) and addictions (cases where a particular module is short-circuiting the mindfulness process), Prof. Wright returned to a general picture of how the modules of mind interact to lead to our choices. How does one module take over? In part we look to evolution, which would have strengthened modules that lead to reproduction, caloric intake, and perhaps simple sense-stimulation. However, of course, in the modern environment, we need modules that temper these. We need self-control (self-less control?), and sometimes this needs to be developed.

So Wright turns again to Judson Brewer (see the video at bottom for more from him), who used mindfulness meditation to help smokers quit. When feelings of craving arise, Brewer taught his subjects a practice of Recognition, Allowing, Investigation, and Noting (RAIN). In talking with Wright, Brewer makes the connection with the Buddhist understanding of clinging:

And, and [Buddhists] actually describe clinging … another translation over upādāna which is translated as clinging is also sustenance or fuel. So in essence you’re fueling that fire every time you act on a craving. And so what we teach people to do is just be with the craving, notice that it’s physical sensations in their body. And you know mental restlessness or whatever and if they don’t act on it, they don’t fuel it and they don’t feed it… If you stop adding fuel to a fire it eventually goes out.

Translated into the language of operant conditioning, Wright hypothesizes that mindfulness then allows us to weaken certain modules (such as hate or unhealthy cravings) through reinforcing other modules – by making meaningful choices not to simply react to hateful/craving impulses as they arise.

So, wrapping up video 2:

Video three begins with the suggestion that Buddhist meditation is a mystical experience, based on a definition by William James. For James, such an experience is 1) noetic – meaning we learn something through it, and 2) ineffible – meaning that we cannot express this insight in words.

So naturally, Prof. Wright went out and asked a meditator to describe his experience with not-self. Rodney Smith offered this:

In words, [LAUGH] which already throws me way off – stillness. There was no contention, okay? And therefore, it was a, there, it felt, stillness was not a contained state. It was infinite. Infinite stillness, because there was no distance. Infinity comes into play when there isn’t any distance. It’s the only time it comes into play. So when there is no object that is counter to yourself, or yourself that is counter to an object, then there is infinity. So I would say infinity, I would say stillness, and, and universal awareness.

Wright then turns to Joseph Goldstein to ask about thoughts in the context of meditation. Goldstein gives an exercise: imagine the thoughts that arise in the mind as originating from the person next to you – not yourself. Note how you can now see that the identification with thought is a secondary step. Thoughts rise and fall like sounds, but identifying with one is something else. And as you might expect, this brings Wright back to the modular theory of the mind.

Thoughts trigger modules, which then take over for a period until some other module takes over in directing thoughts, actions, and even perceptions. Leda Cosmides is brought back to re-state this finding, saying:

There is, to quote the philosopher Thomas Nagel, no “view from nowhere.“

And here are week five’s office hours, where he confronts the age-old debate about whether cats or dogs have more Buddha nature, along with some of the ins and outs of evolutionary psychology:

Judson Brewer on flow, self, and achieving mastery:

May 2, 2014
For May Day: A Pacifist Anarchist Catholic Saint
Next Post 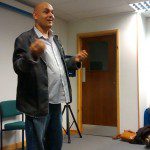 May 4, 2014 Dalai Lama Awakening, a Q&A with Director Khashyar Darvich
Recent Comments
0 | Leave a Comment
"Anyone going to point out that your oldest portrayal of buddha... appears to be white... ..."
Scar The oldest datable depiction of the ..."
"This is a thoughtful article. I must admit, after living in crowded Hong Kong, I ..."
Gary Price The Coronavirus is coming – Some ..."
"Well explained. Dholavira is also one of the largest site of Indus Valley civilization. It ..."
Kirti Bajaj Major Sites of the Indus Valley ..."
"Nice write up Justin."
Catalin Newport In Hong Kong, the Bodhisattvas wear ..."
Browse Our Archives
get the latest from
American Buddhist Perspectives
Sign up for our newsletter