A politics of fear, not hope

A politics of fear, not hope June 7, 2016 Justin Whitaker

Politicians, more than anyone else, have the power to appeal either to our fears or our better natures.

This year there are still three major politicians in the race for the US Presidency: Hillary Clinton, Bernie Sanders, and Donald Trump. I was an early (early) supporter of Clinton, who, from the very start was “anointed” by Democratic party insiders. She served faithfully under Obama, who beat her in 2008. Debbie Wasserman Schultz, Clinton’s former campaign co-chair, had ascended to the top of the Democratic National Committee. Over 400 super-delegates – about 1/5 of the total delegates needed for the nomination – pledged to support her before a single citizen voted.

But Clinton has not been well-received by the “left” part of the Democratic party. As early as 2014, groups began organizing and petitions began circulating to “Draft” Bernie Sanders (and Elizabeth Warren, separately). Both grassroots movements hoped to put forth a liberal alternative to Hillary Clinton.

Then, in May of 2015, Bernie Sanders entered the race. His message was simple: economic populism. We should and can spread the enormous wealth of our nation in a way that benefits the poorest and those in the middle.

Crazy. Socialist. Will not be taken seriously. Those were the pundit reviews, and, by them and many others, he was mostly ignored. As I wrote in September:

Bernie Sanders appeals to white Progressives. That much is obvious.

But not all Progressives are lining up behind him. Notably, those fighting for racial justice under the #BlackLivesMatter banner have targeted him and he finds himself far behind Clinton and even trailing yet-to-be-running Biden in South Carolina, where 55 percent of the voters are black.

In a recent column in the New York Times, Charles M. Blow explores Sanders’ lack of appeal with black voters. There he writes that “An August Gallup Poll found that Hillary Clinton’s favorability among African-Americans was 80 percent, while Sanders’s was 23 percent.” And even more disturbing,  “Two-thirds of blacks were unfamiliar with Sanders.”

As I drove two weeks ago from my home in Helena, MT to Missoula where I teach, I listened to an NPR story about the potential candidacy of  Joe Biden. There, Rachel Martin and Mara Liasson discuss the “antiestablishment fever that’s been sweeping the Democratic Party base” while failing to mention the person at the vanguard of that fever. Liasson even, quite gallingly, says of a potential Biden candidacy that, “There are many Democrats who think it would be good for Hillary Clinton because she’d have a serious opponent, and it would help her become a better candidate.”

Really, no serious opponent? But my jaw didn’t really drop until I heard her next line: “Right now, she’s basically running against herself and her problems.”

If NPR, a supposed bastion of left-leaning thought, can have a nearly 5-minute discussion of the Democratic presidential race without so much as mentioning Sanders, we have a problem.

And, in the media at least, that problem never really went away.

However, for many people (myself included) he did become the liberal alternative that we were searching for. One of the “Draft Elizabeth Warren” groups formally endorsed Sanders last June. In January, MoveOn, another large liberal group, also endorsed Sanders, writing, “In our endorsement vote exit poll, one of the words MoveOn members most frequently used to describe him was ‘integrity.'”

Integrity is a fair word to use for Sanders, who according to Politifact, is the most honest candidate still running (over Clinton and big liar Trump).

Hope is another good word for Sanders’ campaign, so much so that he began to sound an awful lot like Obama in 2008 (minus all of the charisma).

And hope – and with it aspiration, ambition, and forward-thinking, is what I would like to see moving forward in the next few months. With California going to Clinton (at the time of this writing only 36% of votes are reported, but Clinton has a wide lead) and Clinton already “clinching” the presumptive nomination on the 6th, I think Sanders will rightly drop out and extend his support to her. He pushed on this far, making sure every voter – even us in Montana – feel valued and counted, which I deeply appreciate, but pushing on to the convention would do little good.

There are those who suggest that Sanders has harmed Clinton. But I don’t buy it, nor does Sen. Jeanne Shaheen, who endorsed Clinton but said on NPR tonight that the Sanders campaign strengthened Clinton’s. The vigorous exchanges of ideas has been great for Clinton, who will hopefully adopt at least a few further-left policies in an effort to align herself more closely to Sanders’ supporters and win the election in November.

Hope didn’t get Sanders the nomination, it’s true. His message didn’t even get him noticed much until it was all but too late for voters to “get to know him” in many states. Trump’s messages of fear (Mexicans, Muslims, Chinese, the media, etc) did get attention, and, unfortunately, votes. Clinton weaved and bobbed, one day a “progressive” the next a “centrist,” molding herself to the needs of the crowd before her. She has good credentials though, minus, my friends tell me, some serious issues with Libya and Syria. And she’s well-known and, by US standards, left of center.

But she hasn’t said much about “hope.”

Even in her much-hailed foreign policy speech last week, she pitted herself against Trump as a “choice between a fearful America, that’s less secure and less engaged with the world, and a strong, confident America, that leads to keep our country safe and our economy growing.” She then went on to attack Trump, quite successfully, as the potential Commander in Chief who we really should fear.

Clinton’s speech tonight, however, did dwell in hope, noting particularly how Sanders’ arguments had been very good for the Democratic party and for America. She even borrowed several of his talking points before moving on to again attack Trump. But it is the hopeful message that I dearly hope will stick with Clinton and with voters in the months to come, one that sees that not all is right with America, but that we have at our fingertips the resources to fix it – if only we have the will. And let us not forget that Clinton, like any politician, will have the will of the wealthy and corrupt pulling her strongly in one direction. It is up to us to push, pull, and prod her in the direction of the people, of peace, of social welfare and global sustainability. 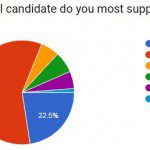 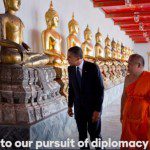 June 10, 2016 A glimpse of Buddhism in Obama's endorsement of Hillary Clinton
Recent Comments
0 | Leave a Comment
"folks hav to learn the local laws wen they invade the space"
Joe Biggs Tourists: Buddha Tattoos are Taboo; as ..."
"too polite ..if folks are ignorant of local laws they hav to be brought to ..."
Joe Biggs Tourists: Buddha Tattoos are Taboo; as ..."
"Five years, a rescued street-cat from Texas (by way of Seattle). His trip to Hong ..."
Justin Whitaker Progressive responses to the 2020 election ..."
"Big move. How old is your cat?"
Brian Lang Progressive responses to the 2020 election ..."
Browse Our Archives
get the latest from
American Buddhist Perspectives
Sign up for our newsletter
POPULAR AT PATHEOS Buddhist
1