The Dalai Lama on Mass Violence

If anyone in the world knows both the depths of tragedy and the power of loving resilience, it is the Dalai Lama. The man lives in exile, having lost his nation and countless countrymen and women. His nonviolent response won him the Nobel Peace Prize in 1989. He has traveled the world speaking to others about universal human values of peace, harmony, and community.

He has yet to issue a statement on the latest mass shooting in Las Vegas, which killed over 50 and wounded at least 400 people. Yet we can turn to his words in the wake of the tragedy in Paris 2 years ago:

When asked about those attacks, the Dalai Lama suggested that violence today is a spillover of the violent 20th century. However:

If we emphasize more on non-violence and harmony, we can herald a new beginning. Unless we make serious attempts to achieve peace, we will continue to see a replay of the mayhem humanity experienced in the 20th century.

The Dalai Lama re-emphasized the shortsightedness of terrorist acts and clarified his earlier statement about prayer:

We cannot solve this problem only through prayers. I am a Buddhist and I believe in praying. But humans have created this problem, and now we are asking God to solve it. It is illogical. God would say, solve it yourself because you created it in the first place.

This message of personal responsibility, inner work, and community-focus has been offered by the Dalai Lama and other Buddhist teachers for centuries. And it is worth restating his words in the wake of the 9/11 attacks, which have proved prophetic:

Terrorism cannot be overcome by the use of force because it does not address the complex underlying problems. In fact the use of force may not only fail to solve the problems, it may exacerbate them and frequently leaves destruction and suffering in its wake. Human conflicts should be resolved with compassion. The key is non-violence.

Support independent writing on Buddhism here by joining a community of fellow learners/practitioners at Patreon. 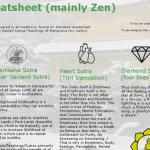 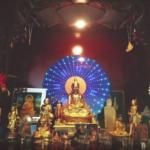 October 12, 2017 A message on the Rohingya from young Burmese American Buddhists
Recent Comments
0 | Leave a Comment
"eMudhra Limited is a certified body, licensed by the Government of India. eMudhra operates in ..."
Mycaportal Buddhism: Dzogchen and Mahamudra
"folks hav to learn the local laws wen they invade the space"
Joe Biggs Tourists: Buddha Tattoos are Taboo; as ..."
"too polite ..if folks are ignorant of local laws they hav to be brought to ..."
Joe Biggs Tourists: Buddha Tattoos are Taboo; as ..."
"Five years, a rescued street-cat from Texas (by way of Seattle). His trip to Hong ..."
Justin Whitaker Progressive responses to the 2020 election ..."
Browse Our Archives
get the latest from
American Buddhist Perspectives
Sign up for our newsletter
POPULAR AT PATHEOS Buddhist
1