Please, don’t be this guy.

This only works when you’re like… Ghandi, MLK, or the Dali Lama, otherwise you’re not being bold so much as you’re just being an asshole.

I cringed through all 90 seconds of this. From the man in the audience shouting out his patriarchal dominance with a “Yeah!,” the chuckles of the girl holding the camera, to this 18 year-old senior naively believing that “standing for Christ” in this instance is imposing his faith in an inappropriate context. All of this, it’s a painful reminder as to why many have such a hard time with the “Westernized Christian.”

You have to understand that this is coming from a guy who started a “multi-church night of worship” titled “STAND” that encouraged students to, you guessed it, “STAND” for Christ. I repent of this.

I think it’s things and events such as STAND that send the wrong message to Christian students that they are the persecuted, that in order to truly “stand for Christ” they need to disregard “the other”. Christian’s we’re not the other, we’re the predominant religion in the states. Yeah denominations are dying, church attendance has dwindled but the power is still there, especially in southern California [minus LA].

You’re not being “bold” you’re being defiant. For him, there is no cost, there’s very little risk, in fact there is more praise in this for him, considering his context, than there would be persecution awaiting him (i.e. the crowd cheering at the end instead of dragging him off stage and stoning him outside the high school’s parking lot.) When Jesus came – Christianity and His messianic consciousness was not the predominantly accepted belief, hence his death. Contextually speaking, it was a slightly different time. I think standing for Christ in this instance would have been the opposite of what this student did.

When the religion of power takes the opportunity to defy “power,” and then get away with it, that’s arrogant, because now we’re all viewed then as a group flaunting our power.

Any time someone says, “May the God of the bible bless each and everyone of you…”  to an atheist, agnostic, or just someone who does not believe in the “God of the Bible,” it’s insulting. What many hear is not, “Hey I love you and we’re equals…” but, “Hey your God, heritage, ideological set of beliefs is wrong [except it’s being said in a passively aggressive manner, so one’s simultaneously saying it with a smile].”

What if, by chance, the school asked him not to quote scripture or speak of the “God of the bible” because there were students and families of various other religions, or from other countries who have had violent or abusive experiences with Christianity, and they were within the audience and only wanted to see their daughter, son, grandson graduate without being either a) shamed for not believing in the “real God” b) reminded of recent trauma incited by “Christians” or c) outright proselytized to, beyond their will.

Most likely – within a southern California context these “other religions” are the minority, they are the ostracized, they are in fact many times (but of course not all the time) comprised with people that are not of european decent. In short – they are the exact people whom Jesus would not want to inadvertently slam, but rather intentionally love. Not to mention, a young brown-haired, suburban, white, male living in beautiful southern California shoving a dominant set of beliefs into the ears of others is rude, insensitive, and unwarranted – with our nations history… [yes, even if you believe that on the ride home, hypothetically, they could get in a car crash… blah blah blah].

This is perpetuating a system of hierarchy by taking advantage of students in which lack the inter-religious relationships and socio-political dynamics carrying the weight of historical mishaps incited by Christians over the last 1,500 years or so. This is why I say over and over and over and over again, blindly buying into a set of beliefs or ideology you know nothing about is one of the most dangerous things anybody can do.

Looking back at my time in youth ministry I don’t regret telling students to STAND for Christ, I regret not better articulating what STANDing for Christ actually looked like within our context, in this case, I don’t think Christ would “stand” for perpetuating a pseudo-eurocentric/evangelical “God of the bible…”

This is of the utmost importance that we as Christian’s understand this. I’m not against evangelizing, but I am against what happened here.

It’s about being accommodatingly aware of the fact that we are as Christian’s still the dominant religion in the US. Denial of our privilege helps no one. We must lovingly and humbly, as I believe Christ would, consider the perspective of the not-so-privileged.

Which means rethinking, and drastically re-defining our methods as the western Church.

[Benjamin L. Corey actually comprised a great list of Anti-Christian examples that take place here in the states, check it out here.] 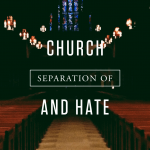 June 24, 2014 Slut-Shaming, Patriarchal Abuse, & A Call to Revolt
Recent Comments
0 | Leave a Comment
Browse Our Archives
get the latest from
Andy Gill
Sign up for our newsletter
POPULAR AT PATHEOS Progressive Christian
1