6 “HERETICS” WHO SHOULD BE BANNED FROM EVANGELICALISM (OR, A LESSON IN CONSISTENCY) 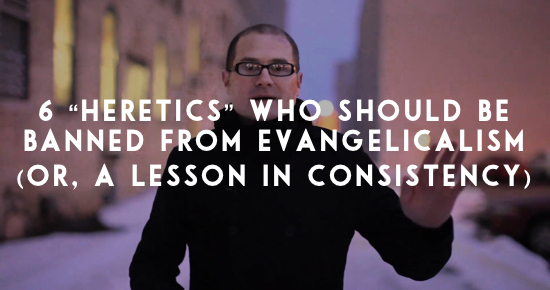 What does it mean to be “evangelical”?

What must you believe?

What must you reject?

Can you be an evangelical Christian and believe…

…that Hell is only temporary?

…that all people, even those in Hell can/will eventually be saved?

…that people from other religions can be saved without even knowing it?

…that the atonement is not about God’s wrath being poured out on Jesus in our place?

…that Scripture is errant?

I think many evangelicals would say “no” to most—maybe even all—of these. That’s why, in an attempt to protect the name of evangelicalism (or, more accurately, to keep certain ideologies in power), some of the most prominent leaders within evangelicalism have made it their responsibility to publicly denounce those with whom they disagree on issues like these.

To be clear, I have no problem with publicly denouncing ideologies (that is, after all, what I’m doing right now). I also believe it is, at times, necessary to publicly call out false teachers. However, one must fully consider whether they promote a different gospel before coming forward with such a bold claim.

Self-appointed gatekeepers of evangelicalism tear apart what could be a noble, diverse movement of the Spirit. In what critics have affectionately named, “excommunitweets,”these gatekeepers take it upon themselves to pronounce who is “in” and who is “out” of orthodox Christianity.

In a previous post I’ve listed a few of the people tossed out of the evangelical community for their slightly-divergent-yet-still-completely-orthodox beliefs. As a moderate evangelical, I’ve found myself on a few occasions, directly or indirectly, accused of not following Christ and even heresy.

By the standards of these gatekeepers, the definition of “evangelical” is becoming so narrow that it really doesn’t describe anyone but themselves. As I’ve said before, evangelicalism is shrinking, and pretty soon even the gatekeepers will have to bid themselves “farewell” due to their inability to meet their own standards.

That, or they will continue to reshape the definition so that it will describe exactly (and only) what they believe.

So, if we are going to be consistent, then I think it’s time to weed out all of the heretics—especially those who have the most influence—not just Rob Bell, Rachel Held Evans, or World Vision.

For starters, I suggest these 6:

Perhaps the most celebrated Christian writer of the last century, C.S. Lewis is respected by most Christians, no matter what theological corner they occupy. And that’s what confuses me. Lewis was no evangelical by the standards of modern evangelical spokespersons. Lewis’ seven-volume, fictional masterpiece, The Chronicles of Narnia, reveals Lewis’ belief that it is possible for people in other religions to inherit the Kingdom of God without knowing it.1

Lewis also rejects the Penal Substitutionary theory of the atonement, which states that Christ “diverted” God’s wrath toward us and took it upon himself. Instead, in part three of Chronicles, Lewis describes what is called the “Christus Victor” view of the atonement, which holds that the cross is not an image of God’s wrath against us, diverted to his son, but it was the defeat of evil through an act of selfless love. Here is a video of Greg Boyd giving a good description of that view using Lewis’ imagery.

Where would evangelicalism be without Martin Luther? He is the father of the Reformation and the champion ofSola Scriptura.

According to one evangelical leader, inerrancy, “…is the only position that is fully compatible with the claim that every word of Scripture is fully inspired and thus fully true and trustworthy.” To the dismay of every evangelical Calvinist (including the one who made the above statement), I fear I must be the bearer of bad news that Martin Luther apparently didn’t believe the Bible is fully inspired, true, or trustworthy.

Speaking of inaccuracies in the books of Chronicles, he states,

“When one often reads that great numbers of people were slain—for example, eighty thousand—I believe that hardly one thousand were actually killed.”2

With that in mind, maybe it’s time we vote Mr. Luther off of the evangelical island.

3. St. Augustine: Guilty of rejecting a literal reading of the Creation Story

In his work, The Literal Meaning of Genesis, Augustine (to put it bluntly) thought Christians who took the Creation Story literally were a laughingstock and looked like idiots among non-Christians because they denied science and reason. This is Augustine, people…the one to whom we can give credit for the doctrines of original sin and Hell as eternal conscious torment (which are at the core of reformed theology).

Here is his statement:

“It not infrequently happens that something about the earth…may be known with the greatest certainty by reasoning or by experience, even by one who is not a Christian. It is too disgraceful and ruinous, though, and greatly to be avoided, that he [the non-Christian] should hear a Christian speaking so idiotically on these matters, and as if in accord with Christian writings, that he might say that he could scarcely keep from laughing when he saw how totally in error they are. In view of this and in keeping it in mind constantly while dealing with the book of Genesis, I have, insofar as I was able, explained in detail and set forth for consideration the meanings of obscure passages, taking care not to affirm rashly some one meaning to the prejudice of another and perhaps better explanation” (emphasis mine).3

Few are the pulpits he would be allowed to fill among conservative churches in our day.

I’ve seen William Barclay’s iconic little blue commentaries on the shelves of many pastors. I find it odd, however, that Rob Bell would be utterly rejected for holding essentially the same belief as this celebrated theologian.

“I am a convinced universalist. I believe that in the end all men will be gathered into the love of God…the choice is whether we accept God’s offer and invitation willingly, or take the long and terrible way round through ages of purification.”4

In that work, Barclay also lists early church fathers, Origen and Gregory of Nyssa, as two other Christian Universalists.

John Stott is one of the great evangelical Christian thinkers of the last generation. Stott rejected the view that Hell is eternal conscious torment of the wicked and suggested, instead, that the unrepentant cease to exist after enduring the penalty for their sins.

“I believe that the ultimate annihilation of the wicked should at least be accepted as a legitimate, biblically founded alternative to their eternal conscious torment.”5

Billy Graham is, perhaps, the epitome of the evangelical identity.

Or, so we thought…

Like C.S. Lewis, Graham believes that those who do not hear of Christ may, indeed, be saved without explicitly confessing him as Lord.

In a 1997 interview with Robert Schuller, Graham said,

“I think that everybody that loves or knows Christ, whether they are conscious of it or not, they are members of the body of Christ. . . . [God] is calling people out of the world for his name, whether they come from the Muslim world, or the Buddhist world or the Christian world, or the non-believing world, they are members of the Body of Christ because they have been called by God. They may not even know the name of Jesus but they know in their hearts that they need something that they don’t have, and they turn to the only light they have, and I think that they are saved and they are going to be with us in heaven.” (This statement starts at 1:18 in this video)

After we finish with these most important aspects of what it means to be evangelical, we can focus on weeding out people for less important things, such as their immorality: George Whitefield’s lobbying for slavery, Martin Luther’s hatred of Jews, John Calvin’s approval of burning heretics at the stake, etc. etc.

Now, I’m sure you, as well as I, find it ridiculous to reject these great and godly people. Which is why it’s amazing to me, the things we ignore in order to protect ourselves from the truth. We want our “heroes of the faith” to be perfect in theology and conduct, so we ignore or justify the parts we don’t like.

So, maybe it’s time to extend a bit more loving kindness to the evolutionists, to those who reject inerrancy, to those who take the Bible literally when it says that God will redeem all people to himself, to the Rob Bells and the World Visions.

For those of us on the moderate-progressive side: maybe we can find it in ourselves to turn the other cheek and forgive those who wish us gone. Then, when we find someone who will accept us–”heresy” and all, let’s embrace and learn from them.

For fun: Here is a list of universalistic quotes from our early church fathers.

Guest Post By Tylor Standley who writes and blogs on issues of faith over at http://tylorstandley.wordpress.com

[image is a screenshot from this video]

May 2, 2014
Tripp and Tyler Present "Christian Tingle: A Dating Site Parody"
Next Post

May 26, 2014 On God & Sex
Recent Comments
457 Comments | Leave a Comment
"This article is largely nonsensical. Really surprised Patheos would print it."
Dr. Sam Currin 5 Legitimate Reasons People No Longer ..."
"wow. quote"a Samaritan, as he traveled, came where the man was; and when he saw ..."
Isa Kocher Why Is the Social Gospel Considered ..."
"Well said."
Jimhere Redefining the Fourth of July
"Sorry. That is not correct."
Bob Shiloh The American Church and Our Ties ..."
Browse Our Archives
Related posts from Andy Gill