The Bible: Can We Trust It? 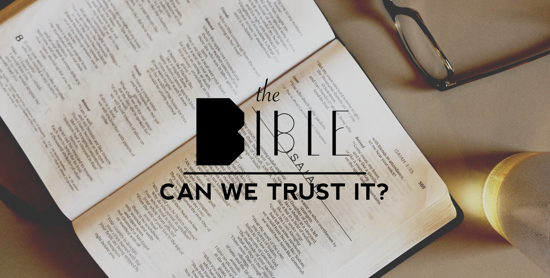 Have you ever taken a step back and asked the question, “Why do I believe what I believe?”

Many of us when asked this question, reply immediately, “Because of the bible.”

Growing up in Churches this is just what we’ve been taught in Sunday school and youth group, from child hood on, singing aloud without thinking: “Jesus loves me this I know, for the bible tells me so…”

We find ourselves believing and dedicating the entirety of our lives, the basis of our morals, the foundation of our hope, the very essence of our faith off “the fact” that the bible tells us so…

… But does it? And if it does, why should we trust it?

You see, we have somewhere around 5,360 manuscripts in the Greek that are all or part of what now makes up the New Testament. None of these manuscripts are originals. With the exception of small fragments, there is not a single manuscript that is the same as another. Within these fragments there are more variants than there are words. Yes, majority of which are minor, but does not the smallest of changes in a sentence at times alter it’s entire meaning?

Though this is a “smaller” change that does not alter the meaning of a text, we have to question, the credibility of the text. With the knowledge that there are not only thousands of other variances but there are now complete omissions of entire verses and debates about which books should or should not be included…

It’s arguable that the bible was never fully canonized and that it’s an ever-changing document being tweaked, corrected, and translated still to this day. Men over the course of centuries have added and deleted verses, and entire books. Fueling the debates in regards to whether or not the bible is inerrant or if it’s infallible.

You ever find it weird how it seems some people use not only the same bible but the same verses to justify their contrasting views?

“The reason the bible matters, is because it can mean whatever you want it to mean.”

So it’s more than a valid question it’s a necessary question to ask, “Who is deciding what makes up, ‘The Word of God’s’ and what makes their authority higher than any other authority?” (Martin Luther vs. The Papal authority **cough cough**)

Now many throw both of those options to floor and question if the bible is even credible.

This poses many tough questions for the church at large. The worst part is, this isn’t even the beginning of it. What about the manuscripts in which we’ve found recently? Or why did not Jesus write anything down? Were there certain agendas the authors, scribes, and councils had when piecing together these books and letters that now make up the bible?

It seems like this is more than a poorly kept secret, but it’s become one of the many elephants in the room that the church is beginning to face. We’re no longer able to brush these issues to the side with books such as “The Case For Christ” which might be suitable for a high school lead small group discussion, but for both Christian and secular academics is seems to be laughable and biased-ly slanted.

What’re your thoughts? Is the text credible? Why or why not?

November 26, 2013 Keep Going
Recent Comments
10 Comments | Leave a Comment
"Manipulation and persuasion are not quite the same. Sadly, the first is probably easier and ..."
K Curtis Is Manipulative Worship Okay?
"Pretty nonsensical hermeneutic, since "the Bible" - in the form in your hands in 2021 ..."
KraigDeKompressorKruncha Five Things You Should Know Before ..."
"But if slavery is wrong now, it was wrong in 1776. Or did it transition, ..."
josephPa Redefining the Fourth of July
"Well it's been four years since this blog last appeared. So I checked but I ..."
Bob Shiloh Progressive is the New Evangelical
Browse Our Archives
get the latest updates from
Andy Gill
and the Patheos
Progressive Christian
Channel
POPULAR AT PATHEOS Progressive Christian
1

The monsters of Rutherford County
slacktivist