One of the major influences on my early Pagan development was a quiz called “Where You At?” developed by Leonard Charles, Jim Dodge, Lynn Milliman, and Victory Stockley, published in Coevolution Quarterly #32 in 1981 and later re-published with some changes as part of an essay called “Nature Religion for Real” by Chas Clifton. I will be coming back to this quiz many times as explore place in this blog, because I return to it again and again in my personal path. Question #7 in the original quiz asks you to name 5 edible plants that grow in your region and their seasons of availability. This one question is one of the first things I want to know in any new place.

Foraging for food is not just for survivalists or dumpster divers hoping to save a few bucks. For one thing, it seems to me the most ecological thing to do is to eat at least some food from the environment around me that would otherwise have gone to waste. If eating locally is good, eating local weeds is even better! From a more mystical perspective, I believe that the food that we take into our bodies shares some of its experience with us. When I eat nettles that grew in my neighborhood, I’m connecting myself physically to my neighborhood.

Stinging Nettle (Urtica dioica) is one of my all time favorite forageable foods. It’s easy to find in a wide range throughout North America and Northern Europe. I’ve had nettles from the hills outside Jerusalem and from the roadside in Seattle. One of the great things about this plant is that once you find it, you’ll probably find a lot of it. It makes a fine tea, goes nicely in soups, or can be steamed up like spinach. It’s high in iron like any good dark green veggie. The seeds are great, too. I pull them off the plants between my thumb and forefinger and munch them as a snack while I walk, and I bring some home to make tincture with too.

People are often afraid of Stinging Nettle because, well, it stings! When I first met this plant I didn’t know about its edible or medicinal qualities and I was just trying to clear it out of the back of my garden. That first day I ended up with horrible stinging rashes all up and down my arms. These days, though, I can almost always walk right up to a plant and harvest its leaves and seeds without pain. It has been suggested that I’ve just become accustomed to the plant from eating so much of it, but I don’t think that’s the whole story. This plant requires a special touch and a special respect. When I have treated it with less care, even as recently as this past summer, I’ve gotten stings to remember.

Talk to the plant. Touch the bottom of the leaves, not the top where most of the stinging hairs are. Use a sharp knife to cut the stem cleanly. Remember to say thank you, and this plant will feed your body and be good medicine for your soul.

Another favorite of mine is Dandelion (Taraxacum officinale) . You may already know that Dandelion root is good roasted up and used as a coffee substitute, but this plant is good for so much more than that. The young leaves are good in salads, though the older leaves can be quite bitter. The yellow flower tops are quite sweet, though, and can be eaten as is, or added to salads or other dishes.

Of course, almost everyone loves to go berry picking! Here in the UK we have lots of different berried to pick from, mostly in the autumn. There are elder berries, sloe berries (great in gin!), blackberries and more.

You may be concerned about the legality of foraging wild food from land that you don’t own. Luckily, in England and Wales the Theft Act of 1968 says that you are not stealing when you pick wild food as long as you aren’t intending to sell that food, and the Scottish Outdoor Access Code similarly gives permission for foraging. Where there are local bye laws against foraging in this country, those restrictions will be well posted, so there is little worry. The rules may be different where you live, so it’s not a bad idea to poke around the Internet find the law or at least to see if you can find other local foragers who know the rules. 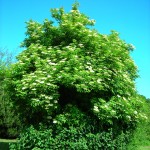 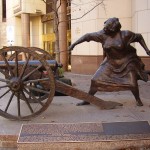 December 20, 2012 Traci's Top 10: Tips For Cultivating Place In The City
Recent Comments
0 | Leave a Comment
Browse Our Archives
get the latest from
Pagan
Sign up for our newsletter
POPULAR AT PATHEOS Pagan
1

Channeling a God, or Why People...
John Beckett
Related posts from A Sense of Place