The land is made of stories

Today in the Christian calendar is Epiphany: the official end of the 12 days of Christmas. In the Roman calendar which was adopted by Christianity, the 12 day festival of Saturnalia, beginning on 25th December, was a period out of ordinary time, a time of divination through dream and weather watching of what to expect in the year to come.

For all that the period between the winter solstice and Epiphany is a time of rest, review and renewal, it’s always a relief to me to be able to put this season to bed. Even though the slog of January, February and March remains ahead, it feels like a final end to the previous year, and a beginning in earnest of the new. My body and soul will still struggle through winter, each in their own ways, but my senses will tell me that the days are getting longer, the light stronger, the earth warmer.

Depending on the weather, the first snowdrops will be coming soon, along with the sound of the oyster-catchers, peep-peeping their way back to their usual haunts, to poke their beaks into the softening earth. But until then, the earth remains asleep – Bride is still kept in drudgery by the Cailleach, Queen of Winter. (If you’re not familiar with the story of the Cailleach, Bride and Angus, the most popular retelling is by Donald Alexander Mackenzie in his 1917 Wonder Tales from Scottish Myth and Legend, but recordings of vivid retellings can also be found at Education Scotland.)

The stories feel very literal here. The Cailleach’s grey hood sits atop the hills as fog – many’s the occasion I’ve driven through it. Her Wind Hags are heard and felt on most days, but for the sweet days of early summer, when the love of Bride and Angus is felt throughout the land in blue skies and warm sun, larksong and the sweet scent of clover. Most years, near midsummer, the Cailleach’s anger at her son, Angus, for running off and marrying her wee drudge Bride and enabling her to bring summer to the land, can be felt in the thunderstorm that rages out of nowhere. In the autumn, the Cailleach’s cloak is laid out across the fields to dry, in mist and cobweb.

As David Abrams suggests regarding Aboriginal songlines and Dreamtime stories in The Spell of the Sensuous, I have found that the old tales of the land here in Scotland are not simply origin myths, or legends of gods and heroes, but guidebooks to survival written by the ancestors of this land: in this case, a mnemonic for what weather to expect at which times of year.

So far this winter the Cailleach’s mood has been remarkably mild. (And yes, I’m touching wood as I type those words.) When she sets her Wind Hags forth to bring frost and snow and ice to the land, the world becomes intensely beautiful: clean and glittering, rainbow colours under the sun, mesmerising blues by moonlight. But her beauty is harsh. On the whole, I prefer her in this negligent mood, allowing food and water to flow freely to the birds, mammals, amphibians and reptiles around us. The sky is grey, the ground squelches, but life is less dangerous for our non-human kin – and for us humans too.

There’s still plenty of time for her to show her hand in the months to come, of course. Our first winter here, we were snowed in from the last day of February until the 10th of March, under feet of snow delivered by a blizzard that lasted three days. We were without electricity for a day and a half. But we had food, thanks to my partner’s insistence on stocking up on tins, and we were warm enough, living in one room, our mattress next to the fire, which we also used for cooking.

In my more whimsical moments, I think the land was testing our mettle, the Cailleach assessing our worthiness to settle here. Then, I was awestruck; two years ago, faced with walking two miles up and down hill, in a blizzard, with heavy bags of shopping, I told it and Her in no uncertain terms what I thought. Sometimes I even imagine they take some notice of me, like one time in early April, on a day I was due to conduct a funeral, when a snow flurry stopped after I turned to the sky and simply said, “Oh, for goodness’ sake. Really?!”

Perhaps the land and the Cailleach and her Wind Hags are amused. Maybe I’ve even gained their respect. I like to think that I’ve earned the right to relate to this land and all of its beings, through attention and persistence and, on occasion, simple bloody-mindedness. 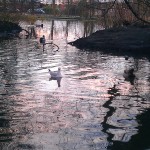