When one’s home shows up on television

I’d heard that the show was filming in town last summer. Several of my friends saw the filming crews. I’ve been anxiously awaiting these episodes. How many people would I recognize? (Turns out only one: my friend’s 3 year old son takes a big bite of a sandwich in a close up.) How many locations would I recognize? (All of them.)

What I wasn’t expecting was to be emotionally gutted. The first episode, when the show is sailing up to Juneau on a cruise ship, captures the beauty of the water ways, large channels of water, with thick, tall evergreens growing down to the water’s edge. Something about the landscape gripped me and I wanted to cry. That’s my land.

This week’s episode, set almost entirely at the Salmon Bake, a tourist spot, was less heartbreaking. I was able to distract myself with location spotting. And yet, the varied shades of green and grey, the two most prominent colors in SE Alaska, were everywhere. The scene where the contestants go out to the ferry terminal in Auke Bay to pick their salmon made me especially homesick. It’s such a bland part of town. I have so many memories of bleary 3 am drop offs at the ferry, waiting to travel to the next town for a swimming meet. And there that was, on national television.

I talked with my husband about my excitement for these episodes and my strong feelings about them. He got sad. He said my attachment to Juneau is like that to a lover. He’s jealous of Juneau. It’s like we’ve been in a polyamorous relationship, only with a place.

He’s right. I’ve written about that before. And still I don’t know what to do. That’s the land I know. That’s the land that makes my soul sing. This week Elisheva wrote about her feelings about Oakland, her homeland, and the struggle over whether or not to move back. I resonated strongly with her post.

There is one more episode set in Juneau. Next week I’ll watch the contestants play on the Mendenhall Glacier, the one I got married in front of, the one I’ve also climbed on and under. I plan to write about that episode and talk about my own struggles around moving home. Because, really? Why don’t I?? 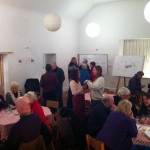