Of Frogs and Flowers – an excerpt from Annie Dillard

Spring has arrived in Cork, Ireland, at last!  Mild temperatures, sun, and the stunning display of flower and bud have kept me outdoors for the past several days.  I’ve idled away many hours swinging on the hammock, staring out toward the Knockmealdown Mountains–their shape like a woman sleeping. Or, perhaps she gazes back, her head resting on her arm, as she listens to the birds: one foot dangling, toes wrapping themselves in cool grass. I’ve also meandered down the lane bagging stray rubbish, checked to see which plants are in bloom, and stood still as a Hazel while watching bunnies at their tea.  The activity of the season has drawn me out, and I am eager to observe the unfurling.

It’s during these seasonal shifts, when my whole being is possessed of childlike wonder at the magical story come to life, that I remember Annie Dillard, and the profound impact her book, Pilgrim at Tinker Creek, had on my life.  For a child whose feet were black, and calloused, from roaming creek-bed and field barefoot all day, and who held a deep and abiding sense that nature parented her when no human did, Ms Dillard’s book was a treasure.  For the first time, I read how other humans watched, and marveled, as I did.   It has been well over 20 years since I read Pilgrim at Tinker Creek, but its poetry of awareness is with me still.

To honor my own reverence, and delight at the changing season, I would like to share a short excerpt from Ms Dillard’s book – a book that has had a lasting affect on my outlook, and my sense of place.  This is the first observation of hers (beginning on page 7) that leapt out and grabbed me, all those long years ago.  Enjoy! 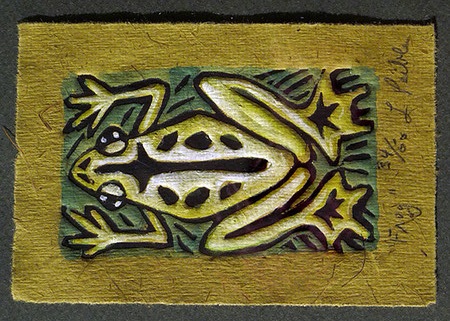 A couple of summers ago I was walking along the edge of the island to see what I could see in the water, and mainly to scare frogs.  Frogs have an inelegant way of taking off from invisible positions on the bank just ahead of your feet, in dire panic, emitting a froggy “Yike!” and splashing into the water.  Incredibly, this amused me, and, incredibly, it amuses me still.  As I walked along the grassy edge of the island, I got better and better at seeing frogs both in and out of the water.  I learned to recognize, slowing down, the difference in texture of the light reflected from mud bank, water, grass, or frog.  Frogs were flying all around me.  At the end of the island I noticed a small green frog.  He was exactly half in and half out of the water, looking like a schematic diagram of an amphibian, and he didn’t jump.

He didn’t jump; I crept closer.  At last I knelt on the island’s winter killed grass, lost, dumbstruck, staring at the frog in the creek just four feet away.  He was a very small frog with wide, dull eyes.  And just as I looked at him, he slowly crumpled and began to sag.  The spirit vanished from his eyes as if snuffed.  His skin emptied and drooped; his very skull seemed to collapse and settle like a kicked tent.  He was shrinking before my eyes like a deflating football.  I watched the taut, glistening skin on his shoulders ruck, and rumple, and fall.  Soon, part of his skin, formless as a pricked balloon, lay in floating folds like bright scum on top of the water: it was a monstrous and terrifying thing.  I gaped bewildered, appalled.  An oval shadow hung in the water behind the drained frog; then the shadow glided away.  The frog skin bag started to sink.

I had read about the giant water bug, but never seen one.  “Giant water bug” is really the name of the creature, which is an enormous, heavy-bodied brown bug.  It eats insects, tadpoles, fish, and frogs.  Its grasping forelegs are mighty and hooked inward.  It seizes a victim with these legs, hugs it tight, and paralyzes it with enzymes injected during a vicious bite.  That one bite is the only bite it ever takes.  Through the puncture shoot the poisons that dissolve the victim’s muscles and bones and organs–all but the skin–and through it the giant water bug sucks out the victim’s body, reduced to a juice.  This event is quite common in warm fresh water.  The frog I saw was being sucked by a giant water bug.  I had been kneeling on the island grass; when the unrecognizable flap of frog skin settled on the creek bottom, swaying, I stood up and brushed the knees of my pants.  I couldn’t catch my breath.

How to Do Paganism Wrong –...
John Beckett
Related posts from A Sense of Place