An Animist’s Take on Fiction: to view or not to view

Sermons from the Mound published a summary article last week titled, “Notes toward a Pagan Theology of Fiction” and referenced some of my own tangential thinking on ‘spirit’ communication, and how the mental images derived from fiction impact this.  Re-reading my cogitation offered an opportunity to consider whether my thinking had changed.  I found it had not.  In fact,  if anything, it had deepened.  My move three years ago to Ireland, a land I mythicized for years, dramatically shifted my spirituality.  When finally able to experientially connect with the land on a daily basis, the stories I had long read with a sense of disconnection, and almost romanticized wonder, took on an unexpected immediacy–they became embodied.  No longer was the Cailleach a symbol, or even a divine principle.  She was now the unity of all it means to live in a dark land during the howling winter.  With this in mind, I want to re-examine how I, as an animist, perceive ‘spirit’ communication and how fiction might influence this.

If you have read any of RJ Stewart’s work, you know he advises against “filling your mind” with images from popular entertainment.  His reasoning for this is two-fold, and related to an example I heard Ivo Domínguez, Jr. use at PantheaCon some years ago during a possession workshop.  In this workshop, Ivo discussed his process for god-form communication, and how he ensures he has “dialed the right number.”  To explain how god-forms might communicate with human-persons, Ivo told the story of the monkey and the talking board:

A monkey, who was willingly or unwillingly a subject in animal communication research, had been given watermelon and really liked it: in fact, he wanted more!  He communicated with his human collaborators using a board with images painted on tiles.  Having decided he wanted watermelon, but lacking an image for watermelon, he pressed “water+candy+fruit” – the closest imagery available.

Ivo’s point being that spirits use the same principle when communicating with humans — they use our stored imagery.  This is why RJ recommends staying away from modern entertainment, such as TV, movies and popular fiction.  Instead, he encourages his students to read source material and folklore. He wants mythic imagery stored in the human mind to ensure more accessible and accurate faery communication.  RJ also relates this sanction to the old faery warning that the underworld acts as a mirror for our psyche–reflecting back to us what we bring in.

Mental imagery is also used in horse training, and in the experimental fields of consciousness research.  A study that came out recently, which I have misplaced the reference for (though other research can be found here), recounts how horses respond to the image held in the mind of the human trainer, i.e., if you want the horse to go toward the barn, hold the image of the barn in your mind.  Relatedly, Psychologists report accounts of humans with memories of both understanding and communicating non-verbally to those around them, during their pre-verbal developmental stage.

In Spell of the Sensuous, David Abram touches on this extra-sensory way of perceiving and discusses how it is normative in pre-literate cultures.  He describes how human-persons, in those oral cultures, “come to know themselves primarily as they are reflected back by the [other-than-human persons] and the animate landscapes with which they are directly engaged.”  I suspect this extra-sensory mode of perception was once tied more closely to our primary method of communication, and still is for most life in the universe–including earth herself.   Yet, we  need not think of this experience as ‘extra.’  It is based in our neurology.  According to Merleau-Ponty, when the synaesthesia between our eyes and ears is concentrated, the visual and auditory foci are virtually indistinguishable, readying us–sensual beings that we are– to respond with our whole body to the Other.

“The animistic proclivity to perceive the angular shape of a boulder (while shadows shift across its surface) as a kind of meaningful gesture, or to enter into felt conversations with clouds and owls–all of this could be brushed aside as imaginary distortion or hallucinatory fantasy if such active participation were not the very structure of perception, if the creative interplay of the senses in the things they encounter was not our sole way of linking ourselves to those things and letting the things weave themselves into our experience.  Direct, prereflective perception is inherently synaesthetic, participatory, and animist, disclosing the things and elements that surround us not as inert objects but as expressive subjects, entities, powers, potencies.”

Anthropocentrism has led us toward an experience of isolation and separateness.  Cut-off from the living world around us, we turn instead to fictions and fantasies of our mind: constructs developed to mimic the native connection between one’s own flesh and the encompassing flesh of the world.

As an animist (and I only speak for myself), I do not view the land around me as filled with disembodied, non-corporeal entities–a dualism arising from the scientific world view– though, I do not discount the possibility of Mind or Life expressing itself in this way, in some alternate reality or universe.  Instead, I see the universe as FULL of living, conscious, embodied powers, some of whom may be open to, or interested in, communication.  “Helios, ‘lord of high noon,’ is not distinct from the sun (the fiery sun here a willful intelligence able even to father children).  Even ‘fair Dawn, with her spreading fingertips of rose,’ is a living power.”  Within this perspective, I see our common language–the one all life can tap into–as one of imagery and sensuality.  I leave it with you to decide, given the importance of this channel for direct and participatory experience, what constitutes ‘garbage’ –in regard to the images we fill our unconscious with– and whether ‘garbage in’ equals ‘garbage out.’ 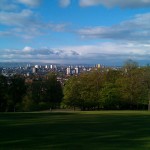 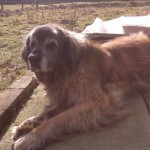