I have just a week and a half left here in Greensboro, NC. I haven’t seen much of anything. I know the house where I’m staying with my friend and her twin boys and I know the Greensboro College campus. One day I took a walk from the house to the nearest grocery store — about a mile and a bit — but I don’t have any plans to do that again. The walk taught me a very important thing about myself, but I don’t think I really want to work on that failing of mine right now.* I’m frustrated with myself that I haven’t learned anything new about my ancestors since I arrived, that I haven’t found the time or the capacity to do more research or walk around in new places. I feel like I’ve failed myself here.

Shortly after getting invited to North Carolina to give some talks at Greensboro College, I learned that my father was born in this city and that some of his family never left here. My father and I looked up the address of the home where his family lived when he was born and discovered that it was now a police station. I had planned to look into more information about my father’s family when I got here, but I haven’t. Not at all.

When I arrived at the Greensboro Amtrak Station after midnight a few weeks ago, I stood outside for a moment, smoking a cigarette, and apologizing to the spirits of place for whatever the history of my family might be. I don’t know them, but I’m pretty sure they weren’t good to the indigenous people, to the African-Americans, to anyone who wasn’t like them. You might wonder why I judge them so harshly, but I can only go based on what I know of my grandparents, my father’s siblings, and the tales my father has told about his cousins, aunts and uncles. I’m not very close with my father’s family. I don’t have any particularly good associations with any of the elders on that side. Even my father’s sons are more mystery to me than reality. I barely know them, even though I’ve always idolized the idea of them.

A couple of days ago, I sat in my friend’s backyard and breathed in deeply the scents of this place. It smelled like pine needles and warm, humid air. There was a hint of summer around the corner, even though Winter is far from done with us here. I looked around the space at this unfamiliar environment and tried to make sense of this Place in my spirit. My mind flashed on some of the things I’ve seen on our morning drives to school: Friendly street, Guilford College, the New Garden Friends School and the Quaker meeting house. I like Quakers. They’re pretty cool.

I remember the old graveyard at the Medieval church in Stoke Poges, Buckinghamshire, England where I saw a series of gravestones of a family with my father’s last name, “Wall”. I’d wondered then if these Walls were related to us at all. The same graveyard has the graves of several of the Penn family, the same Penns who founded Pennsylvania. Only a few of the Buckinghamshire Penns were buried at the church in Stoke Poges, near the manor home where the family lived for many years. The rest were buried at the Quaker graveyard about 8 miles away near Chalfont St. Giles. I never went there, never looked to see if some of my family, or that family that might be related to me, was in the Quaker graveyard as well.

It never occurred to me that any of my ancestors might be Quaker. Now that I look around this place, I realize that they might have been, and if not Quaker, they might have still been people with alternative ideas about God and Spirit. Ancestors on my father’s side might well have struggled with some of the same questions I struggle with. They might have fought the dominant paradigms of their day and tried to find better ways to live. Surely, it makes sense that a family that chose to leave England and come to Greensboro might have been looking for a different way to live in the midst of their own modern crises.

I realize that I have more holes in my knowledge of my Father’s family than I have understanding. For years I thought that my dad’s father was a first generation American, but it turns out that he was not. I don’t know how long the Walls were here. I know that my grandfather was a deeply flawed man, and my grandmother was both keenly intelligent and sharply vindictive. I have heard tell that she chose to stay married to my grandfather to make his life miserable in return to wrongs he did to her. I always figured that this kind of dysfunctional family dynamic must have gone back into my Father’s family forever. There was no obvious break I knew of that would have caused such hateful attitudes. Have I judged them unfairly?

Perhaps there were crimes against my ancestors, traumas that killed the kind spirit of some earlier generations. It is easy for me to forgive the unkindness of my mother’s line because I know the traumas that they faced. I know what it is that they need to heal from, and so I work to heal those things within myself. I know nothing of what my father’s grandparents or great-grandparents faced.

I don’t have much time left, and I have an awful lot of work to do in these next days before I leave here. I doubt that I’ll learn much more about the Walls than I knew before. Perhaps it’s time for me to dig deeper, though, into those roots in my father’s family tree. Two weeks from now, I’ll be sitting with one of my big brothers. Perhaps we can search for answers together.

* It turns out that I am more afraid of heights than I am of cars travelling at 45 mph. When walking across the bridge over the Interstate, it became suddenly clear that a) this bridge was not meant for pedestrians and b) my lizard brain thinks that a guard railing at knee hight is an invitation to trip and fall, not a protection against it. Thus, I walked as close to the cars in the road and as far away from guard rail as I possibly could. 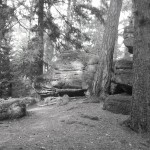 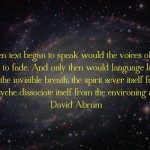 February 27, 2014 Do The Gods Care About Money?
Recent Comments
156 Comments | Leave a Comment
Browse Our Archives
get the latest from
Pagan
Sign up for our newsletter
POPULAR AT PATHEOS Pagan
1

Passions of the heart
Divination is the practice of reading passions.
view all Pagan blogs
What Are Your Thoughts?leave a comment
Copyright 2008-2021, Patheos. All rights reserved.