This Friday just gone was Langholm’s Common Riding. Since I’ve lived in Eskdale, I’ve been both fascinated by Langholm Common Riding, and mainly stayed as far away from it as possible — although I have been, once.

It’s an odd local custom, involving thousands of people, a couple of hundred horses, and an awful lot of alcohol. And for some Langholmites, it’s a bigger day than Christmas.

What happens on ‘Langholm’s Great Day’

The Langholm Common Riding is held on the last Friday in July, every year. The day starts at 5am, when a flute and triangle band march around the town, rousing its inhabitants. (Anyone who has a flute or a triangle can join in, so it can end up being more mayhem than music!) Then the crowds start to arrive… and the drinking starts.

“GENTLEMEN – the first thing I am going to acquaint you with are the names of the Portioners’ Grounds of Langholm from whence their services are from;

Now, Gentlemen, we’re gan frae the Toun’,
And first of a’ the Kil-Green we gan’ roun’;
It is an ancient place where clay is got,
And it belangs tae us by Right and Lot;
And then frae there the Lang Wood we gan’ throu’,
Where every ane may breckons cut and pu’;
And last of a’ we to the Moss do steer,
Tae see gif a’ oor Mairches they be clear;
And when unto the Castle Craigs we come,
I’ll cry the Langholm Fair and then we’ll beat the drum.

Now, Gentlemen what you have heard this day concerning going roond oor Marches, it is expected that everyone who has occasion for Peats, Breckons, Flacks, Stanes or Clay, will go out in defence of their property, and they shall hear the Proclamation of the Langholm Fair upon the Castle Craigs.”

It should be noted that the cryer announces all this while standing on horseback:

The Cornet —  a young man of the town with excellent horsemanship, elected annually to the office — receives the town banner, flanked by his Right and Left Hand Men.

Then there is much horse-riding — and very impressive it is, too, with 200 or so horses cantering up a steep lane, led by the Cornet, holding the (very heavy) town banner as he leads the charge.

The horses make their way all around the boundaries of the land to which the townspeople legally have rights, and come back to the High Street. This is followed by the parading of symbols of Thistle (the biggest thistle grown in the town that year), Crown (made of roses), and a salted herring hammered to a large barley bannock, painted with the letters BB, held upon a wooden pole, with all of Langholm’s five town bands (this, in a town with a population of 2500) involved. Children follow with heather besoms, and the parade of horses crosses the river at the Kilngreen, where a symbolic sod of peat is cut with a spade decorated in that year’s colours.

The Second Fair Crying and its Conclusion is given:

This Is To Give Notice that there is a muckle Fair to be hadden in the muckle Toun o’ the Langholm on the 15th day of July, auld style, upon his Grace the Duke of Buccleuch’s Merk Lands, for the space of eight days and upwards; and a’ land-loupers, and dub-scoupers, and gae-by-the-gate swingers, that come to breed hurdums or durdums, huliments or buliments, hagglements or bragglements, or to molest this public Fair,they shall be ta’en by order of the Bailey and Toun Cooncil, and their lugs be nailed to the tron wi’ a twalpenny nail, and they shall sit doun on their bare knees and pray seven times for the King and thrice for the Muckle Laird o’ Ralton, and pay a groat tae me, Jamie Ferguson, Baillie o’ the aforesaid Manor, and I’ll away hame and hae a Bannock and a saut herring tae ma denner by way o’ auld style.”

Then Auld Lang Syne is sung, and there is racing of humans and horses, and wrestling and other competitions on the Kilngreen, and the aforementioned fair.

The history of Langholm Common Riding

Many people believe the tradition of Common Ridings and Galas across the Scottish Borders and Dumfriesshire — of which there are many throughout the summer — has its origins in the times of the Border Reivers, back in the 14th century. However, in the case of Langholm, its origins are much more recent.

It wasn’t until 1759 that the Court of Session in Edinburgh recognised the rights of the people of Langholm to the land in and around the town, particularly the rights to cut clay and peat. To maintain these rights, the boundaries of the land needed to be clearly marked with cairns, ditches, and other obvious signs, which needed to be checked and mended where necessary once a year. Initially the task fell to one Archibald Beattie, who performed the task on foot until 1823.

The first horses weren’t  involved until 1816, when two inn landlords and a mill-man joined Beattie in the task, and started the tradition of horse racing. Now at least 200 horse are to be seen on the Common Riding day itself, and there are many ‘ride-outs’ in the weeks leading up to the Common Riding, where local people ride the hills around the town.

A modern tradition of people and land

As Pagans, we are often used to thinking of traditions linking people to seasons and to land as ancient and lost, not contemporary, living things. Langholm Common Riding — along with the other Ridings of the Marches in Hawick, West Linton, Selkirk, Peebles, Melrose, Galashiels, Jedburgh, Kelso, Coldstream, Duns and Lauder, and Galas in Lockerbie, Moffat, Dumfries and elsewhere across Dumfriesshire — gives the lie to this idea.

It may not be what I, as a queer, feminist Pagan, would ideally like such a tradition to be, with its overbearing masculinity (however many young women ride), as well as its celebration of prowess and courage. But it is, above all, a day on which the community celebrating itself, and its collective rights. It is a tradition which directly ties the people of Langholm to the land on and in which they live, and to which they have a legal, emotional, and it could be argued a spiritual bond.

For an insider’s view of Langholm Common Riding, this short documentary is well worth a watch: 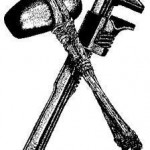