Pagan is Latin for Redneck

After my Pagan Short History of Valentine’s Day guest post on Agora, I’m taking a short interlude from my Elemental Ethos series, having completed Earth and Air, to provide a bit more context and talk about my favorite definition of “Pagan.”

Pagan is Latin for “redneck.”

The first time this definition occurred to me, it made me giggle. With apologies to Jeff Foxworthy, it definitely has the humorous aspect of meaning covered. But the more time goes by, the more I like this definition from many points of view, and not just because it’s funny. This characterization is accurate, both from a historical and an etymological point of view. The actual Latin term is Paganus, which is usually rendered in English as “country-dweller.” Historically, this term came to describe those who lived outside the protection of the nascent city of Rome. This term is an ancient term of otherness, applying to those who either already had been or would shortly be conquered by Rome. It was disparaging, much like the “redneck” of today.

Rome, like all cities, is a place where all the natural life that existed there was razed and destroyed, so that human buildings can stand in close proximity to one another. In many cities, this destruction happened so long ago the memory of what once was where the city now is has faded dramatically. To this day, every time I pass by a piece of land that has been cleared for human construction, I have a visceral, almost emotional reaction; a mourning…. and even these freshly-cut trees are typically no more than 100 years old in Maine, where the entire state has been clearcut several times, leaving only about 30,000 acres (far less than 1%) of old-growth forest in the entire state.

Once the city is built, outside resources must then be brought into the city for the people to survive. Denizens of cities normally don’t grow, hunt, or gather their food. They trade for it, or buy it, from the actual food producers. The natural ecosystems that existed prior to the cities being built are mostly destroyed, these days with concrete and asphalt. What natural life remains in the city — trees planted the same distance apart in small, caged holes in the sidewalk, small parks scattered throughout the urban landscape, feral housepets mingling with squirrels, crows, seagulls, and pigeons who largely feed off the same food, discarded by humans, that had been brought in to the city — has nowhere near the depth of diversity of the pre-urban ecosystem. The patterns and rhythms of life, death, and sustenance are abstracted away, evading our very consciousness, much less our reverence.

Under such conditions, dwelling takes on a different character. Dwelling is somewhat of a peculiar term. At first, most people interpret it as simply living, in the sense that one “dwells” inside a house, their dwelling. But this conception of dwelling missing the philosophical richness of the term.

“Strictly speaking I myself never observe the landscape. I experience its hourly changes, day and night, in the great comings and goings of the seasons. The gravity of the mountains and the hardness of their primeval rock, the slow and deliberate growth of the fir-trees, the brilliant, simple splendor of the meadows in bloom, the rush of the mountain brook in the long autumn night, the stern simplicity of the flatlands covered with snow — all of this moves and flows through and penetrates daily existence up there, and not in forced moments of “aesthetic” immersion or artificial empathy, but only when one’s own existence stands in its work. It is the work alone that opens up space for the reality that is these mountains. The course of the work remains embedded in what happens in the region” (Heidegger, p27).

Dwelling is above all a relationship, a being-with a place, and everything in the place. It is a struggle, and the distinctive manner in which each person’s Being unfolds. Other pagan writers have commented on the centrality of dwelling to paganism; for instance, Thom van Dooren wrote that dwelling is

to become aware of the ‘pattern of a place,’ the way that it flows and moves, and the way that we can naturally fit into this pattern. This awareness must be gained from a genuine relationship with a place, from observation, honouring, celebration, and otherwise getting to know a place and what it does throughout the year” (Van Dooren 267-8).

For me, this sort of dwelling is the foundation of any paganism worthy of the term. This is not to say that urban dwellers cannot be pagan, or are somehow less pagan, though I do believe that the more we participate in the infrastructures of civilization, the more abstract our relationship to nature and its ecosystems becomes. Dwelling in an ecosystem is more challenging for someone who lives in a city.

For me, paganism is far more an ethos — a way of dwelling — than a theology. This is not to say that theology has no place in paganism, but rather that the way we live should be central to our practices as pagans. What is the point of concretizing our relationship with gods or spirits as our relationship to place becomes more and more abstract?

Heidegger, Martin, “Why Do I Stay In The Provinces? (1934),” in Heidegger: The Man and the Thinker, ed. Thomas Sheehan (Chicago: Precedent Publishing, 1981). 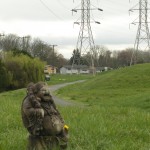