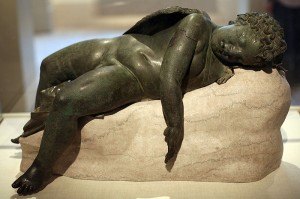 German Witch: I have been doing a little experiment by casting a circle in my room and then sleeping in it. The result has been amazing, I have been having  intense but positive dreams in which things that worry me in the waking world are resolved in positive and profound ways. The impact has been a greater sense of peace during the day. If feels like I am doing a working in my sleep. Are there any concerns around this experiment? Are there traditions that practice casting circles to sleep in?

The wonderful thing about your Protectors is that they don’t take vacations, get sick, or need down-time. Once you have set some shields around yourself they are there until you change or recharge them. They are on-duty rest-or-play, sleep-or-awake. Dream on! Your fairies/angels/elves/insert-tutelary-guard-spirit(s)-here will keep you well.

What you are doing is a more participatory version of “Sleeping on it”, – a key source of the breakthroughs that have propelled Humankind forward through the ages. By cycling a problem through all the stages of sleep (theta, beta, delta, mu, gamma and alpha) your brain can examine the difficulty from about 8 different dimensions. With that kind of firepower, it is no wonder that people often awake with the insight they need.

What you are adding to this potent mixture is a aura of Ritual Cleansing to the proceedings, and I see no downside – as long as you remember to extinguish your candles!

Two other things to consider though:

1) Spellwork (ritual sleeping falls into this category), is always on the Goddess’ time continuum scale, which makes 3-D chess look like tic-tac-toe: Sometimes resolution can take awhile, and may only be obvious in hindsight. Don’t be disappointed if it takes a month of Sacred Naps to gain the insight that you need.

2) This is about as far as I would go in controlling one’s sleep activities. My view on sleep is that it is a wholly other state of being than are conscious selves. To put too much of our waking Beta state into it is to stunt its Magick. Put another way, the more we humanize our Gods the more we limit them. Let go, let it come, on its own terms, and be grateful that we can engage in this portal on a nightly basis.

As to your final question, I know of no traditions that formally incorporate circle-casting into their sleeping. Eckankar is probably the closest organized entity that does something similar, and, how shall we put this diplomatically: Their ways differ from my own.

Sleep is a wonderful way to augment the normal tools in our toolbox, but should be not focused on or pursued too directly – that way lies madness.

So, gute nacht German Witch, and may no alpdrücken interrupt your journeys!

Cleopatra: Who built the Great Pyramids at Giza?

Excellent question. my queen! This is one of those classic “Nothing-is-known-so-beaucoup-is-written” scenarios. Nothing like these pyramids existed before, right? And so SOMEBODY or SOMETHING must have COME DOWN and presented these wonders to the astonished locals. Oooooh. Aaaaaah.

Now rise, tender cattle, and do some thinking for yourself. Far from being the only pyramids out there, the Giza complex is merely the apex of the technology. By the time Cheops & Sons were tossing up the family plots 4,500 years ago, Pyramids could be seen all over the world, from Mexico, to China, to the Philippines, to England. There are also

other pyramids in, of all places, Egypt, where the trial runs for the great pyramids litter the landscape. The step pyramid of Zoser, for example, is a remarkable achievement for its time, and clearly influenced the makers of the Gizan pyramids a few hundred years later.

So who built the Egyptian Pyramids? Call me a populist, but I’m going to go with the Egyptians. The combination of some trial runs, an intense spirituality, unbridled Ego, and a limitless slave contingent can create amazing things (pyramids) or incredibly evil things (The Third Reich). And the latest finds indicate that the Egyptian workers were more like well-cared for seasonal workers than slaves.

What bugs me about all of these otherwise entertaining subcontracting-of-the-pyramids scenarios is how racist they are. Check ’em out: It’s always the white boys who float in to save the day, always the Europeans, always the First Worlders “saving” the Third Worlders. AGAIN.

And even if the scenario is little greys from outer space, the stinky subtext is that the dark skinned locals couldn’t have done it themselves. There is plenty to ponder in Egyptology, and some amazing coincidences do crop up, but the authorship of Giza is pretty straight forward: Da peoples done did it demselves.

P.S. Cleo? Sometimes it does come from outside: Egyptians made the pyramids, but they didn’t make you. Your namesake and the whole Ptolemy dynasty were not Egyptian at all, but Macedonian. So, you’re a Greek then. Opa!

(photo credits: Wikipedia Commons {That’s Eros, after too much Strawberry Quik}, Wikipedia Commons again {looks like the thorazine all kicked in at once},  Collection of embarrasing photos of the Author, Wikipedia Commons one more time {I believe this was originally a National Geogrpaphic pic though}, fourthdimensionalrecovery.files.wordpress.com, and omg-facts.com) 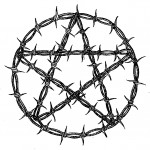 September 3, 2013 AskAngus 20: All You Need is Maenad Love
Recent Comments
0 | Leave a Comment
"Now I want one of these...😹😹"
Liz Davenport Review: Instant Fortune Teller!
"What we do with it is positive and/or healing, but the possibility always exists to ..."
kyuss, cannabis farmer AskAngus11: Boston Marathon Bombing
"At large group ritual there’s often no place for the musically challenged, and I’m not ..."
kyuss, cannabis farmer AskAngus13: Sad on the sidelines
"The older I get the better I was...."
John Gills Ask Angus #44: The Good Old ..."
Browse Our Archives
get the latest from
Pagan
Sign up for our newsletter
POPULAR AT PATHEOS Pagan
1