Invisibility: Mastering the Art of Vanishing by Steve Richards (Review) 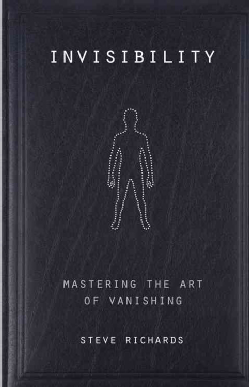 My Editor at Patheos sent me this book to review, because, as she said: “With your output, a book on Invisibility is perfect.”

But even with that kind of gentle pressure applied to my keester, I am waaaay late in posting a review of this book. But the thing is, I had all these notes written and now I don’t see them ANYWHERE.

Sorry – a little joke there. Which is WAY more levity than what you will find in this frowny little tome.

Assuming you are able to find this book at all.

Sorry. I did it again.

Okay. I’m back. Made myself a glass of Strawberry Quik. I’m all better now. Ready to try and save you from spending your hard earned dough on this slim volume. Because the only thing that’s going to vanish when you buy this book is your money.

Spoiler alert: There is no easy recipe in this book to make yourself disappear. There is a recipe of sorts, but it is insanely complicated, undecipherable to mere hu-mans, and may only be useful as a sure-fire cure for insomnia.

Read this book, close your eyes, and the rest of the world disappears!

Sorry. I fell asleep on the keyboard. It’s kind of short ng out now fr m all of m  dro l.
So, I am afraid am I entirely unable to objectively review Invisibility: Mastering the Art of Vanishing. It has conquered me utterly. 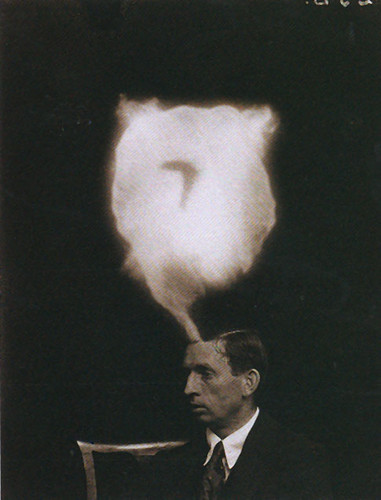 (Pg. 35) “What Aristotle called simply matter, Thomas Aquinas named prime matter. The kind of matter we see all around us he called the second matter. It is the result of the union between the prime matter and the form, and is known in alchemy as the body of matter, or Salt.”

(All emphasis, capitalization and punctuation from the text of the book. I need add nothing to make my case, I think.)

Need the firm and solid ground of mathematics to help you penetrate the mystery of invisibility? Not a problem. Example #3:

I read that sentence and then had a dream that Farrah and Henry were driving around a flooded town in a Ford Akasa. When I woke up there was drool all over my keyboard.

And I checked: All of those ‘not-so-meaningful units’ are legit. If you aren’t sure what a Henry is, here is the definition from his – er, I mean its Wikipedia page:

Got it? You’ll be walking unseen into locker rooms in no time!

Okay. I put on a jacket and went out and looked at the moon for a bit. Cleared my head, as it always does.

Let’s try this again. There are a host of problems with Invisibility: Mastering the Art of Vanishing. Awkward phrasing, run-on sentences, cul-de-sac paragraphs that resist all attempt to link to the next bunch of big words are just some of the delights to be found on every page. (Pages 110 through 117 are a tour-de-force of stream of consciousness hopscotch concerto that careens all over Eastern Mysticism without ever once touching down and making an actual point, let alone addressing the subject of the book.)

But here’s my central problem with it: Steve never says that he’s done it. You’d think with a book of this trajectory that a testimonial would be right there in the first chapter, if not the introduction. “I DID IT. I MADE MYSELF INVISIBLE. Here are the details of one of my jaunts. Sound cool? You know it! Here’s how YOU can do it too.”

That kind of thing. I need a little sizzle with the sales pitch. This is the world’s longest 140-page book, and reading it has left me constipated because I keep going to sleep and falling off the toilet.

So here’s the shorthand version:

And that’s it. Voila! Go forth – the locker rooms of the world await!

25 pages are then utilized in explaining the ‘Oriental’ (meaning ‘Indian’) way of disappearing: It’s the same as the Western way, but the Maharishi has different names for things, because he comes from a distant land that speaks a different language.

The last 10 pages of the book are devoted to an alternate way of becoming invisible, one that the Golden Dawn utilized. Except Steve can’t tell you what it is, because it’s a secret. Also, he’s never tried it himself.

Well thanks for that, Steve. Good on ya, mate.

So, if you are a Ceremonial Magickian with a lot of time on your hands, some caffeine pills and a curiosity about how many Farrahs and Henries can fit into a square meter of a Ford Akasa, then this small, HEAVY book may be of some interest to you.

But me, I am a simple Folk Magickian with an interest in actually doing things, as opposed to just studying them and attempting to explain them (but only to other higher beings on my level). So I will tell you about Persephone:

Perse was my co-worker at 13:Real Magick, the first witchy store in Santa Cruz. She grew up in a tenement in Boston in a huge Italian family where she was never alone. (“Only to go to the bathroom, and even then someone would be knocking on the door every 30 seconds.”)

So she developed a method of, not disappearing so much, as getting people to ‘not notice’ her. She did this by sitting quietly and imagining a subtle screen around her. Nothing too energetic (because energy attracts attention), but just a subtle deflection reflection.

And I will give you my testimonial that this absolutely DID work. Between the sales floor and the stock room was a connecting small room with a loveseat in it. Persephone would take breaks by sitting there and doing her homework, and Branwen and I would move back and forth and just ‘not notice’ her there.

I wasn’t even aware that she was doing this spell until one time I was in the little room asking Branwen a question in the stock room, and Persephone answered from 4 feet away, and I discovered that I could indeed scream like a little girl.

Surprisingly, this technique IS mentioned in Invisibility: Mastering the Art of Vanishing. But you have to really look for it. (Sorry. I did it again.) It’s tacked awkwardly onto the last two pages of the ‘Oriental’ chapter, and even quotes Aleister Crowley himself:

“The real secret of invisibility is not concerned with the laws of optics at all. The trick is to prevent people noticing you when they normally would do so.”

And it says everything about this grim, terse, dense little book that the most concise and lucid quote comes from Uncle Al.

(Photos from Half.Com, vi.sualize.us, stock-clip.com and the authors Photobooth collection.)

P.S. Even easier method: Just slip on the One Ring and POOF! Gone.

February 9, 2014 Ask Angus #26: Valentine's Day (or the Bohemian rite of Beltane!)
Recent Comments
0 | Leave a Comment
Browse Our Archives
get the latest from
Pagan
Sign up for our newsletter
POPULAR AT PATHEOS Pagan
1