Table for One: Okay, here’s one of those ice-breaker questions that I would like your take on: If you could invite 10 people to dinner, ANY 10 people, who would you choose?

Okay. I’m back. Cleaned up the mess.

What a question! After much soul-searching (sorry for the lateness of this reply!), I’ve decided to only cheat a little bit.

First things first: I’ve got two ancient Greeks, an Englishman from the 16th Century, and a Chinese-American from Hong Kong. Solution? Babelfish for everyone!

Now. If I can have a sumptuous meal anywhere in the world, at anytime, where would I set my ass down? I’ll go with Stonehenge, at about the time of Christ, when the place was only 2,000 years old. And I’ll pick mid-summer for my meal, so the place will be sunlit for the entire party.

Round table, so everyone can see everyone else. We ARE in the land of King Arthur after all, so I’ll borrow his dining set.

What’s for dinner? I dunno. I’m not a foodie. My favorite meal is corn fritters and Strawberry Quik, for chrissakes. But I do enjoy an excellent gourmet meal, so I will entrust the menu to Masaharu Morimoto, who may indeed make something extraordinary with corn fritters – and probably make an ice sculpture of one at the same time.

The wine and other beverages I will entrust to Vincent Price, because, DUH.

The Fun Hole of History

Most importantly – who is occupying the other ten chairs around the big, round table? As you might imagine, this took a LOT of thinkerin’ and became a VERY long table of sighing frustration.

But eventually a pattern emerged:

This would not be a Trial of History. I would not be breaking bread with Hitler, Jesus, Genghis Khan, Pope Alexander the 6th, Nero, Stalin, Khufu (of the great pyramid), Vlad the Impaler, Henry VIII and Typhoid Mary just so I could ask them all: “What the fuck?”

(Nothing personal against Jesus, but I’ve never felt personally drawn to him. I’d just like his take on what his salesmen did with his life and message.)

That list would be an incredible evening, but not a whole lot of fun (Plus, Genghis would probably just kidnap Masaharu and then murder the rest of us.)

Similarly, a few heroes of mine didn’t make the final list. Sorry Jack London, Edgar Allen Poe and Beethoven. Jack would want to preach about Socialism, Edgar would just pout and drink all the wine until he disappeared under the table, and Ludwig would scowl at everyone and claim that his babelfish wasn’t working properly.

Naaah, I want a good party! So my list is full of people that I think would make for a lively evening of conversation.

As I assembled my guests though, another pattern emerged – or rather a gap. I wanted fun people for this soiree, but History has a ‘fun hole’ in it the size of the Dark Ages. So only one of my guests is from the period between 400 A.D. and 1700 A.D. What is it about Christianity that just sucked the joy out of Society for several hundred years?

The VIPs of RSVP

You don’t know his name, but you know his work: Ward was a chief animator at the Disney Studios and one of Walt’s “Nine Old Men” who were responsible for the classic Disney movies, shorts and TV shows of almost 40 years. Ward created Jiminy Cricket, the Cheshire cat and the Mad Hatter, The dwarfs, Bambi, and the wildest, most psychedelic feature of them all, the three Caballeros.

Ward was the outlier in this very Conservative corporation, making a non-Disney short protesting the Vietnam war, animating the most pagan cartoon ever, “The Goddess of Spring”, and being the chief architect of the rumor that Walt is frozen somewhere.

Ward directed three documentaries about space travel in the 50’s, had a full-size, working train system in his backyard, and also created mechanical art that hung on the wall but also had tiny motors that made parts of it move.

He was also the trombone player and leader of the Dixieland revival group, The Firehouse Five + 2, who released 13 albums in the 50’s and 60’s. So you can see why he might be fun at a dinner party…..speaking of which…….

What happens at the Party…….!

So, what happens? I don’t know! I’ll bet it would be a blast though.

Seated around King Arthur’s round table with 10 amazing people, sing-alongs with tinkling piano, the mid-summer sun reluctantly setting behind Salisbury Plain, the echoes of laughter absorbed and reflected off the sarsens of Stonehenge, and the candlelight glinting off an ice sculpture of a corn fritter.

Send your questions on Paganism (or anything!) to: angusmcmahan@gmail.com

P.S. Your turn. Who would you choose for YOUR dinner party? Where would you hold it? And it shouldn’t be hard to come up with a better menu than mine. Leave a comment with your ideas!

(Photo Note: All collage photos from Wikimedia Commons and under public domain. Photo of Me at Stone’enge taken by Admiral Karen Broughton.) 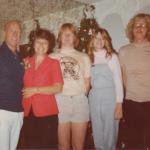 April 1, 2018 Ask Angus #41: The Meaning of LIFE
Recent Comments
0 | Leave a Comment
"Now I want one of these...😹😹"
Liz Davenport Review: Instant Fortune Teller!
"What we do with it is positive and/or healing, but the possibility always exists to ..."
kyuss, cannabis farmer AskAngus11: Boston Marathon Bombing
"At large group ritual there’s often no place for the musically challenged, and I’m not ..."
kyuss, cannabis farmer AskAngus13: Sad on the sidelines
"The older I get the better I was...."
John Gills Ask Angus #44: The Good Old ..."
Browse Our Archives
Follow Us!