The Only Rule Christians Must Obey

Contrary to popular belief, the problem with moral relativism is not that it allows far too much fun and annoys the hell out of the Puritans. If it were, it might be a tempting worldview, this whole what’s-wrong-for-you-ain’t-wrong-for-me frolic. No, the problem with moral relativism is that it takes the fun out of everything, and makes the world hellishly Puritanical.

There are two ways to ruin a game. The first to add too many rules, and the second is too eliminate all of them. If a man were to sit me down for a one-legged, blindfolded game of chess in which pieces could only be moved according to the fibonacci sequence, and the sides were switched every 17 moves, I might play a few moves before proposing we watch cat videos instead. Worse though, would be if a man were to sit me down at a chessboard and say, “Let’s you and I do whatever we like. What’s right for you isn’t necessarily right for me.”

I don’t think I’d wait for the inevitable juggling of chess pieces. I’d run straight to cat videos, no hesitation. The most limiting cage in existence is woven by the lack of limitations, and it seems a rather obvious fact that the eradication of rules can only lead to the eradication of the game itself.

And yet we live in a world in which the current fad is the absence of rules. This — my good-looking individuals — is a very boring fad. It cannot come from a mind with a good sense of the joy, beauty and fun of life. Such a mind would never be so miserly as to ruin a child’s game. No, it’s the moral relativists sucking the fun out of life, the fun of sin as much as the fun of virtue.

Oh yes, the fun of sin! I suppose one might be mildly annoyed at the commandment — or

the rule — against adultery. It is, after all, a momentary Biblical buzz-kill in the midst of a Modernist Playboy high. I can sympathize with the man who bristles at being told not to have pre-marital sex. But surely worse than the seventh commandment is the eradication of all commandments? Would that same man not bristle all the bristlier, being told that there is no right or wrong, that having pre-marital sex with your lover exists on the same plane as walking your dog? That it is all relative? Moral relativism doesn’t make sin more available, it just makes it more boring! The problem with calling sin no more than a benign action — like brushing your teeth — is that it makes sin as exciting as brushing your teeth. But sadly enough, this seems an accurate description of our age — sinful and bored. We are children thrown into the yard, told, “Play a game in which absolutely anything you do is allowed!” Ready, set, aaand this sucks doesn’t it?

Children know this innately: Happier are the games with one or two good rules than those with a thousand bad ones, and those with none at all. (“You may step any where you like, but the asphalt is lava!” “From now on you can’t use the letter ‘s’!” “You’re the good guy, I’m the bad guy!” etc.) I’d like to pretend otherwise, that we brought a stern reason and some intricate system of morality to the world, but no, this is the beautifully childish idea that Christianity has preserved: Life was meant to be unending, innocent joy. That’s how it began. The greatest game ever created had but one rule, and it was this: “Do not eat of the Tree of Knowledge of Good and Evil.” All else allowed. 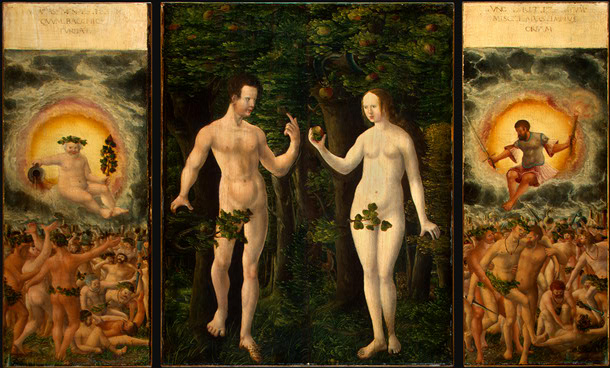 Seen in this light, moral relativism is the oldest sin in existence. The Serpent told Eve “you will be like God, knowing good and evil.” The temptation was the same then as it is now. You can be like God! The maker of morality! Why, you can decide Good and Evil! But in deciding that there were no rules, Adam and Eve ruined the game, and they didn’t even have cat videos to make themselves feel better. They ruined the game, lost their innocence and in place of the One Good Rule received thousands of nitpicking ones, from clothing their nakedness down to the last ridiculous intricacy of the Mosaic law.

Similarly, the modern age has made morality relative, and yet we are subject to the most ridiculous amount of nitpicking that’s ever existed. We forsook rules for relativism, and yet we can scarcely move for fear of pain, litigation, social failure, economic failure, offense, scorn, libel, calumny, bad health, government interference, political correctness, and all the rest. In the age where anything goes, we are more depressed than ever.

The good news — really, the only Gospel worth preaching — is that Christ restored the game. Anyone can play, if they so desire. He stripped away the thousands of rules, and gave us back the One Good Rule. He is the voice crying out in the wilderness, “The asphalt is lava!” He has found the lost sheep; the adventure of childhood. St. Augustine summed up his One Rule better than any one else: “Love God, and do what you want.”

That’s it. Nothing more. It turns out, at the end of it all, that our childhood games were the real thing, and all else mere boredom and strife. In a world that strives to live without rules, and so lives with thousands, let us foolish, childish Christians shine like beacons — loving God and doing whatever the hell we want.

December 9, 2011
Why Gay Marriage Is a Bad Idea
Next Post

December 11, 2011 A Gay Reader Writes...
Recent Comments
0 | Leave a Comment
"All political art is lame?"
George Arnold Ghosts With Erections
"I don’t know what bible your reading, but if you really think Jesus wanted his ..."
George In Defense of Covering Catholic Churches ..."
"1. Conflates a child's sense of wonder with religion.2. Untold thousands of children have been ..."
Lucius 3 Arguments Atheists Aren’t Allowed To ..."
"Brilliant and mind opener. You're hot! Jajaja"
agusq1970 Modesty Sets Fire
Browse Our Archives
Related posts from Bad Catholic