A Second Letter To President Obama, Under the Assumption He Missed the First

When you announced you were making an accommodation for religious institutions morally opposed to paying for their employees’ contraceptives and sterilizations, I thought “aw hell yeah!” and “he read my letter!” and “he likes me!” and “we’re gonna hang out and drink beer at the House!” and I imagined you all like this…

…and life was beautiful. But my exuberance was short-lived, for as it turns out, you missed my letter entirely. That, or you’ve decided that this is your shining moment to take down the Catholic Church in America, and neither letter nor silly Constitution will stop you.

I am not aware of any alternatives, for the accommodation you offered to religious institutions opposed to funding the use of artificial contraception was first insulting, and then — somewhat embarrassingly — even worse than the original HHS mandate.

Now don’t get me wrong, I understand that you had to do something break the ranks of the faithful. After all, who would have expected those outdated, medieval Bishops to lead such a united charge in favor of religious liberty? Your plan backfired, Barry: Instead of painting the Church as ridiculously oppressive, you managed to usher America into an incredible zeitgest, in which NPR dislikes you and Mike Huckabee can declare “We are all Catholic now,” without being damned to hell thrice over. You got rocked by the Bishops.

And so we got your counterstrike, your ‘accommodation’, that: “…if a woman’s employer is a charity or a hospital that has a religious objection to providing contraceptive services as part of their health plan, the insurance company — not the hospital, not the charity — will be required to reach out and offer the woman contraceptive care free of charge, without co-pays and without hassles.”

Now I don’t know if you ever managed to sit in on a moral principles class, but allow me to try and explain why this sugarcoated politiking is ridiculous. Think about it: If you tried to force orthodox Jewish restaurants to sell bacon, and those Jews — rightfully — told you to take a knee, punch yourself in the face and read the Constitution, it would be no ‘accommodation’ to then force them to pay for a Gentile with a bacon cart to serve pork inside their restaurant. The Jews would still be paying for and serving the bacon, you’ve just made them pay some one else to do it. By this logic, hiring a hitman is delightfully ethical — “I didn’t do it, I got someone else to!”

So allow me to apply this to the current situation: You told Catholic institutions that they must provide for free contraceptives and sterilizations in their insurance plans. They said, and I quote, “No.”

To accommodate them you said the “insurance company — not the hospital, not the charity — will be required to reach out and offer the woman contraceptive care free of charge.”

Obama, who — precisely — is buying the insurance companies’ free-contraceptive

“We note that today’s proposal continues to involve needless government intrusion in the internal governance of religious institutions and to threaten government coercion of religious people and groups to violate their most deeply held convictions. In a nation dedicated to religious liberty as its first and founding principle, we should not be limited to negotiating within these parameters. The only complete solution to this religious-liberty problem is for HHS to rescind the mandate of these objectionable services…”

You said, “Under the rule, women will still have access to free preventive care that includes contraceptive services — no matter where they work.  So that core principle remains.”

Please tell me, for the sake of our friendship, that you were misquoted. Because this “no matter where they work,” business is not a remaining core principle, it’s an entirely new principle, rotten to the core. Previously, the Mandate’s religious exemption covered churches, parish offices, and institution that only serve members of their own faith, out of some odd philanthropic desire that Catholics start religiously discriminating the poor and sick they serve. Now you’ve even flounced that. No matter where they work? So every single institution in America is now forced to pay for contraception – oh I’m sorry, I meant forced to buy insurance plans that will pay for contraception —  and that makes it okay? It’s not tyrannical if you’re being a tyrant to everyone? Maybe no one has told you, so I will be clear: We are opposed to paying money to provide for artificial contraception, no. matter. what.

You have given faithful Catholics the duty of civil disobedience. We will carry it out, with joy. Oh and before I forget, I was asked to relay a quick message, that you may never claim you were not warned: 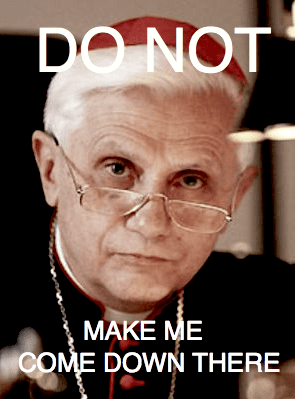 Keep up the fight everyone! Do not be deceived by the supposed ‘accommodation’, by the patronizing sneers the Administration is using to divide the Church, and to split her forces. In order to fight against this arrogance, I’ve made my own petition, entitled:

We Petition the Obama Administration To: Keep Calm and Cease Being an Ass Towards the Church

Sign it, share it, enjoy it immensely, and be filled with unshakable hope by the knowledge that we stand for goodness, truth and beauty against the powers of the world.

UPDATE: Sadly the federal Government took down my nice petition. Which deserves this:

February 14, 2012 Christopher West's At the Heart of the Gospel...
Recent Comments
0 | Leave a Comment
"All political art is lame?"
George Arnold Ghosts With Erections
"I don’t know what bible your reading, but if you really think Jesus wanted his ..."
George In Defense of Covering Catholic Churches ..."
"1. Conflates a child's sense of wonder with religion.2. Untold thousands of children have been ..."
Lucius 3 Arguments Atheists Aren’t Allowed To ..."
"Brilliant and mind opener. You're hot! Jajaja"
agusq1970 Modesty Sets Fire
Browse Our Archives
Related posts from Bad Catholic