It’s possible to believe a thing to be absolutely true, and simultaneously live like it’s absolutely false. L’example: There are billions of human beings who profess that strange doctrine of the Incarnation, and who celebrate the Christmas Day when Truth, Goodness and Beauty became Man. But of those billons, how many treat Man as a new and glorified being in whom dwells divinity?

If I pass a woman on the street, and know beyond a shadow of doubt she is destined to become infinitely like God, chances are I would pass her with a certain reverence. I don’t.

But we’re aware of this suckage, aware enough that I’d like to write about something worse: Our striking ability to recognize something as absolutely and irrevocably false, and go on living as if it were true. Brushing past that woman on the street is failure to live up to Truth. It happens. Living as true what we know to be false, however, is cuddling, stroking and feeding a lie. (And since a lie is only the absence of truth — and in and of itself does not exist — we resemble insane people feeling up invisible strangers in an empty, padded cell. We revel in Pure Absence.)

For instance, we may know that it’s a lie that pornography can bring us any satisfaction. But we’ll live like it can. We may know that selfishness cannot produce happiness. But we’ll still hold on to our hard-earned cash.

Now in my case, the lie is Determinism.

It’s not my business here to provide a rousing disproof of this remarkably unarousing philosophy. For now it will do to point out that if “for everything that happens there are conditions which, given them, nothing else could happen,” then the bastards preaching this had better explain why Determinism has no bearing on human experience.

(To be clear: If I marry a girl — God help her — it is not my experience that I was determined to do so. In fact, I rather think I chose to do it. If I get up now and hop on one foot, I think the same, as I believe does every human being in his natural state. I understand that this human experience of Free Will would be brushed aside by any Determinist as an illusion and a rather idiotic part of my mental capacity, but this begs the question: Why on earth, then, do we trust our experience and mental capacities to accurately lead us to the belief that Determinism is true? If our brains are made up of nothing but the probabilistic movements of atoms, why do we trust them to lead us to a belief that our brains are made up of nothing more than the probabilistic movements of atoms? It’s philosophical suicide.) I don’t buy it.

The ridiculous philosophy of Determinism becomes mighty sensible whenever I’m tempted to commit my predominant sin. Whatever this is for each of us — gossip, apathy, lust, lying — it can make us quite the Determinists, chubby cheeks and all. When the will is tempted, the intellect bows.

Thus while we may not excuse ourselves for a random outburst of anger, the moment we commit our favorite sin is the moment we start saying things like, “The conditions were against me. I’ve been stuck in this pattern for a long time.”

We can say no to an out-of-the-blue temptation to steal a car, but the moment we’re tempted to commit our every-single-freaking-time sin is the moment we give it an “Oh well, I do this all the time.”

It’s when we stop thinking about the individual act of sin, and instead begin thinking of an abstract pattern of sin. We stop thinking about the individual, malicious act of gossip that we will be held accountable for, and instead think of an abstract “All the Gossipping We Do” (as if God will call us to bear witness to The General Sin of Gossip in our lives, and not every. single. act). We move the sin from a situation in which we can act (gossip or don’t gossip) to a situation in which we can’t (you are a Gossiper.) We all but say: I couldn’t not do it. Conditions are against me, I’m stuck, I’m addicted, I can’t do otherwise. We become Determinists, taking that long fall from Grace.

This is the coddling of a lie, and if our predominant sin is ever going to be conquered, if our addictions are ever going to be tried and burned on the stake, we’re going to have to first slaughter the lie that gives us this leeway. Now on a normal day, I’d tell everyone to pray more, and do your best, because I like finding problems, but I’m awful at finding solutions. 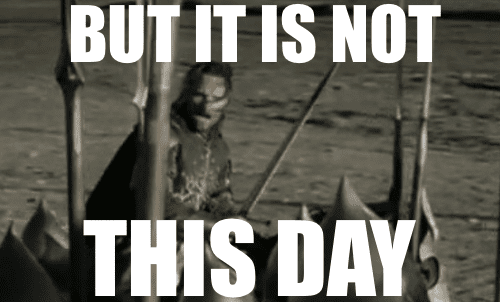 …for I’ve thought of a solution. I was listening to NPR’s New Dimensions (whenever I doubt that being Catholic is worth the hardship, I listen to whatever the New Age folk are doing) and a certain man was quoting a certain yoga teacher as saying, “Environment is always stronger than willpower,” like it was the wisest bit of brilliance to ever hit California. 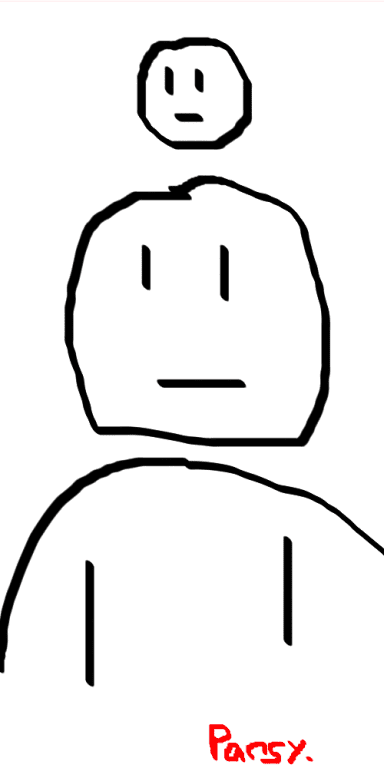 Maybe your willpower is weaker than your environment. Maybe your actions are determined by the surrounding conditions. But not mine. I mean sure, I say they are every time I commit my predominant sin. But that’s a lie.

Thus the following morning found me hopping on one foot from my bed to the bathroom. 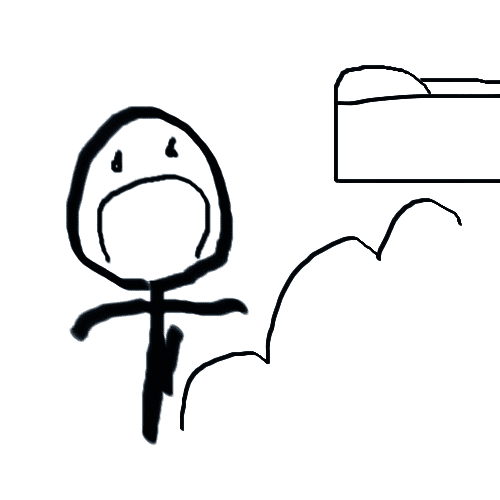 Why, you ask? Well, everything about my conditions told me not to. I was tired, I have awful balance, the bathroom is far away, and all of society was screaming against my action. (Had they known, at least.) 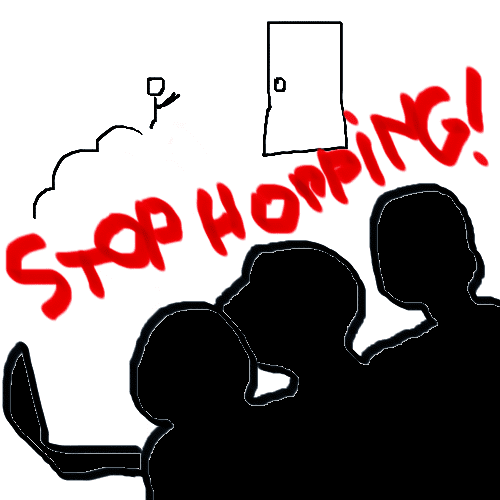 But I didn’t stop. I wanted to make an act of the will. I wanted to make an act utterly free from everything except my choice to do it (and my desire to shake Determinism, of course). As far as my own experience was concerned, I was hopping because I willed it, and there was nothing else to it. When I go to the bathroom I sat on the toilet and thought: 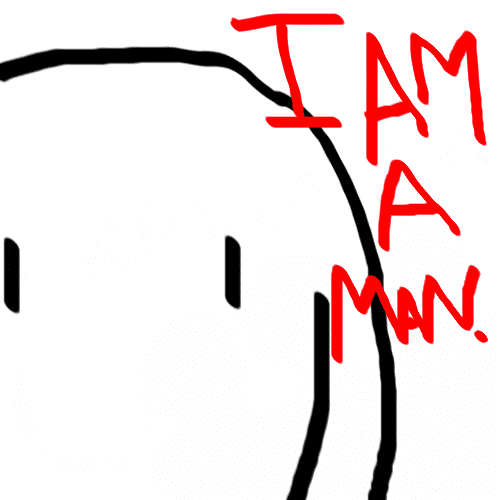 …because I made a tiny, ridiculous, immature act of the will. I reminded myself of my own humanity. I am a human being, and thus I can do what is disadvantageous to me, for no other reason than that I will it. Today, in a continuation of this project, I am starving myself. When I’ve reached the pinnacle of my hunger, I will place before me a rock and a sandwich. I will then proceed to suck on the rock.

Then, when I am faced with the choice to sin or not to sin, I will remember these moments, flick off my Determinism, and make an act of the will. I’ll hop away from temptation. Because if I can choose to hop, just because, then I can choose not to sin, even if all the armies of Hell rage against me, all hip and with-it society eggs me on, and everything within my being wants to sin — just because. This is what it means to be human. We are endowed with the monstrous power to do what we want. And as it turns out, I want God.

So that’s my advice for today. If you find yourself in a sin you feel determined to commit, start making Ridiculous Acts of the Will. When people ask you why you soaked your dress shoes in gasoline and set them on fire, politely tell them “because I can,” and then proceed on your way to Sainthood.

June 30, 2012 Awesome Guest Post: Should we stone abortion clinicians?
Recent Comments
0 | Leave a Comment
"I don’t know what bible your reading, but if you really think Jesus wanted his ..."
George In Defense of Covering Catholic Churches ..."
"1. Conflates a child's sense of wonder with religion.2. Untold thousands of children have been ..."
Lucius 3 Arguments Atheists Aren’t Allowed To ..."
"Brilliant and mind opener. You're hot! Jajaja"
agusq1970 Modesty Sets Fire
"Great quality content man, I am really impressed with this one. Thanks for sharing this ..."
diksha gupta Culturally Catholic, Baby.
Browse Our Archives
Related posts from Bad Catholic