In Defense of Nice Churches

Every Catholic is at some point obliged to defend the flair his Church has for covering everything in gold. 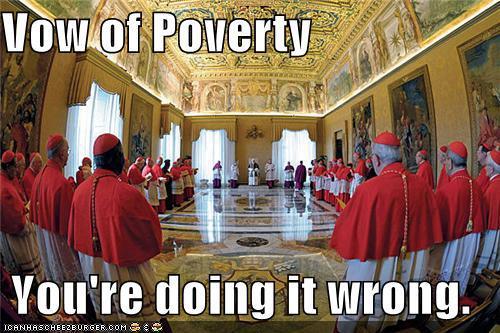 Complaints in the vein of the internet-brilliance above aren’t without foundation. There have been all manners of abuses regarding wealth within the Church, and — if I may prophesy — there will continue to be. No sane man would defend the personal hoarding of wealth, especially not among clergymen. But when the man outside of the Church bemoans the unsold wealth of the Church, he’s not thinking of crooked cardinals or Popes parading as Renaissance princes. He is thinking of the cathedrals and the basilicas, the thrones and tabernacles of gold, the chalices of sliver and the jewel-encrusted robes, the pomp and pageantry of the largest human institution in the world. Hence: 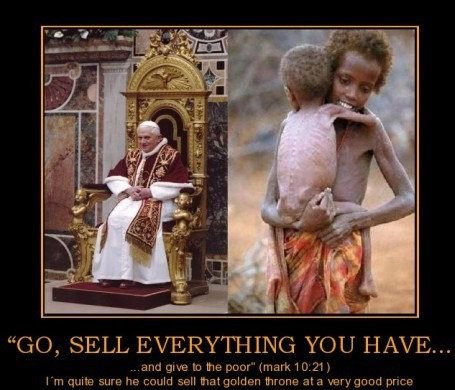 To summarize the modern axiom: The Catholic Church has gold and refuses to sell it, thus the Church lets the poor starve.

It’s a noble complaint, but the reality is this: The Church’s wealth comes from the poor. What people miss when they speak of “The Catholic Church” — and by it mean a few cardinals, bishops, and a Pope — is that the Catholic Church is made up of every Catholic, rich and poor alike. Thus the upkeep and general wealth of the Church comes from every member of the Church, rich and poor alike, giving to their respective dioceses. As a college student who has put his laughable dollar into the collection plate more than twice, I can attest to this fact.

But most importantly — and this really is my point here — the wealth of the Church exists for the edification and benefit of every Catholic. Cathedrals are not solely for bishops. A throne exists for more than the man sitting on it. It is a certain nasty pride that tells the man suffering from poverty that the Beauty surrounding him — be he a homeless man appreciating the cool of St. Patrick’s Cathedral in New York, or a Haitian saying prayers in the Cathédrale St. Jacques et St. Philippe — that it should all be torn down, sold, and given to him in the form of money. It is an offense to say, “this golden tabernacle you kneel before — it should be melted for bread.” The poor man in this position would do well to tell his just-escaped-the-Internet friend the truth that “man does not live on bread alone.”

Faulting the Cathedrals and Basilicas of the world for containing “too much” wealth is an awkward denial of the fact that the Cathedrals and Basilicas of the world are explicitly for the use of the poor, and to steal from them is to steal — not merely from the Church — but from the poor themselves, who — despite the perceptions of Hollywood — do not merely need bread, cash and contraception, but beauty, ritual, and God as well.

Make sense? The visible wealth — the very stuff that sets people complaining — is for the poor.

But surely the cardinals and Popes are rolling in it. Right? I can’t speak for the entire world, but the average salary of an American bishop is 23,ooo dollars a year, about half the average American’s. The average priest’s is 40,000 dollars a year, only 20,000 of which is actually “take home cash”. And if you’re the Pope, not only does your salary suck, but you don’t get it until you’re dead. Pope’s get one gold, silver and copper coin for each year of service placed on their coffin. Blessed John Paul II received about $141 dollars.

In my next post, I’ll be writing on why it’s entirely natural for human beings, in the sight of this sort of humility, to give it the best we have to offer — to house humility in temples of gold.

September 9, 2012
Why This Catholic Girl Is Praying For a Schism Part 2
Next Post

September 13, 2012 In Defense of Covering Catholic Churches With All Sorts of Gold
Recent Comments
0 | Leave a Comment
"All political art is lame?"
George Arnold Ghosts With Erections
"I don’t know what bible your reading, but if you really think Jesus wanted his ..."
George In Defense of Covering Catholic Churches ..."
"1. Conflates a child's sense of wonder with religion.2. Untold thousands of children have been ..."
Lucius 3 Arguments Atheists Aren’t Allowed To ..."
"Brilliant and mind opener. You're hot! Jajaja"
agusq1970 Modesty Sets Fire
Browse Our Archives
Related posts from Bad Catholic