In Defense of Covering Catholic Churches With All Sorts of Gold

“While Jesus was in Bethany, a woman came to him with an alabaster jar of very expensive perfume, which she poured on his head. When the disciples saw this, they were indignant. “Why this waste?” they asked. “This perfume could have been sold at a high price and the money given to the poor.” Aware of this, Jesus said to them, “Why are you bothering this woman? She has done a beautiful thing to me. The poor you will always have with you, but you will not always have me. When she poured this perfume on my body, she did it to prepare me for burial. I tell you the truth, wherever this gospel is preached throughout the world, what she has done will also be told, in memory of her.”

This is paradoxical. After all, the exaltation of the humble is a thing the humble — by their nature — are uninterested in. Martin Luther King would be the last to want every other street christened “Martin Luther King Boulevard” — yet so every other street is christened. Mother Theresa would surely have us spend less on posters of her wrinkled face, and more on the poor — but that won’t dissuade the world from extolling her in libraries, churches and schools, or from building statues, painting murals, and buying her image. 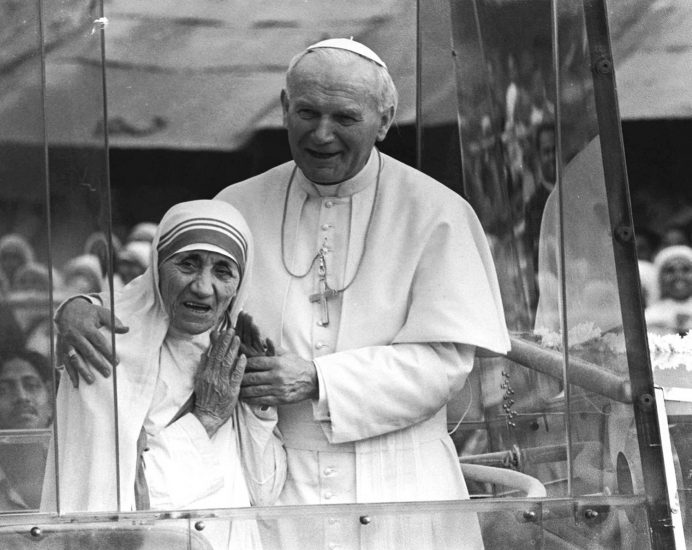 It seems that the Rabbi’s upside-down claim that “the humble shall be exalted” rings true not merely in the sense of the future exaltation of Heaven, but within the human heart. We naturally exalt the humble.

Consider a marriage proposal. A man is most exalted precisely when he is most humble — when he bends down on one knee and begs the object of his love to concede to call him husband. Consider the child. It is not the king a mother gazes on and exalts, but the baby born to her — a naked, helpless, humble creature — whom she crowns her jewel, her love, and her all. Consider a death. It is the ultimate humility — the absolute, inevitable humility of human mortality — that we exalt with ritual. Of all men the dead man least desires exaltation, yet we will pile upon him flowers, poetry, praise and prayer — music, memory and a holy piece of earth. We lift up the lowly.

For praise is the joyful bow of a free man. If Mother Theresa had gone about her work pridefully, demanding that we follow her, then praise of her would always be praise demanded. But Mother Theresa went about her work in all humility. Thus enthroning her in praise — whether in statues, books, or sainthood — is joyful. We bow to her greatness, but we bow willfully and of our own accord, in love and sincerity. We are thus ennobled. 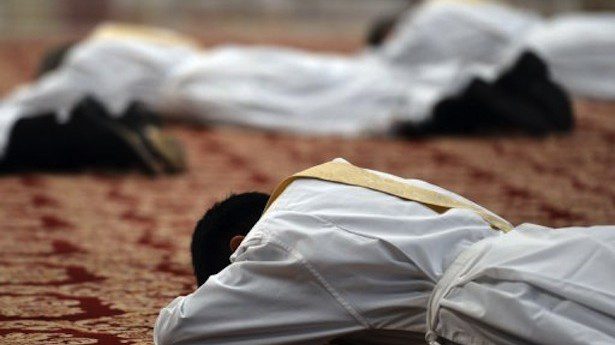 Why? Because this contradicts our world, who demands we consider ourselves the summit of existence. We are to be proud of ourselves, happy with who we are, full of self-esteem, bowing to no one — which is all well and good as long as one avoids the sneaking suspicion that he’s an imperfect wreck of a man, a feat which — as far as I can tell — has only ever been achieved by Ayn Rand.

The humble allow us to bow — and bow happily! — and in doing so avoid the death that is self-obsession.  We admit — in the view of men like Ghandi — that there are those whose virtue we have yet to attain, whose life we hope to emulate. Praise of those great in humility is natural and easy: It frees us from the endless panic and disappointment that is a life lived under the assumption that we are the greatest. Exalting the humble, in this sense, is a minor salvation, for it allows us to freely admit that we can improve, that we can become what we are not, and that we can escape the misery of selfishness and pride.

For praise is rarely separated from the desire to be like the object of praise. This is not always in itself good, as when we praise the merely rich, the evil, or the shallow. But when it is a praise of greatness in humility, the very act of praise is simultaneously an inspiration for ourselves to share in that humble greatness, as the exaltation of Mother Theresa is simultaneously an inspiration to be like Mother Theresa. The exaltation of the humble always leads us to desire communion with the humble.

And so, as travelers at a journey’s end, we arrive at God. God’s humility is so great, His desire for us so strong, that He — the Transcendent First Cause of All Nature — became flesh and blood and guts and bone. The Fullness of Beauty became Man to teach us how to live. The Fullness of Truth took on our fallen nature and died in atonement for our sins, granting to us what our moaning, yearning, Mumford-and-Sons-loving hearts cry for: Communion with our Maker.

God did this in the utmost of humility, coming not as a king, but as a baby, living not as a Lord, but as a carpenter, dying not as hero, but as a criminal, remaining not as a conqueror, but as bread and wine, fruit of the earth and fruit of the vine. Does this not make sense? In this very humility we are given the opportunity to exalt our God. He does not need our praise. The humble — by their nature — are uninterested in exaltation. The exaltation of the humble is not for the sake of the humble, but for the sake of the exaltant. His humility is a gift to us. We are fulfilled in exalting him, for precisely the same reasons we are ennobled in our earthly lifting of the lowly: We may bow before the manger and the cross willfully and in perfect freedom, desiring — as is natural — to be in communion with Him, our ultimate object of our praise. Because of His humility we may bow, always experiencing this gift of praise as salvation, for by it we admit that we are fallen, and that through Him we can become what we are not — children of God once more, children whose restless hearts are stilled. 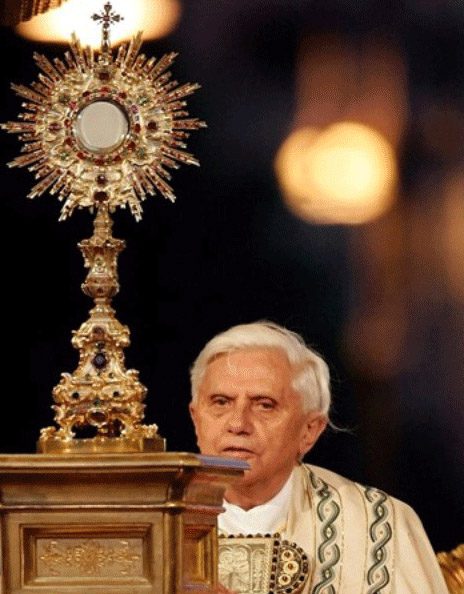 This is my defense of the gold that adorns Catholic Churches. For Catholics believe the words of Christ, that He becomes bread for us, and that by this we really, truly eat His body, taking within us the divine life. Could we fathom the depth of humility it would take for a man to offer those who wrong him his flesh to eat and blood to drink? Can we fathom becoming food for our enemies, that they may live? Then we should tremble at even the consideration of God’s humble descent into food for us.

But he told us it was so, and thus, infinitely more than we respond to earthly instances of greatness in humility, we respond to this. Infinitely more than we exalt the humble man, we exalt the Humble God. We come bearing gifts to enthrone the throneless King, we come to Bethlehem — which only means House of Bread — as Magi seeking to praise he who has made himself vulnerable to our praises. We give him our rarest, for it is our salvation to praise God, to recognize Him as infinitely greater than ourselves and thus able to save. We build for him a tabernacle of gold, and chalices of silver, pillars of marble and windows of fiery glass. He does not disdain these treasures any more than he disdained the Wise Men’s or the woman at Bethany’s, for our praise is his gift to us, the poor, who by it are granted the desire for communion with him. 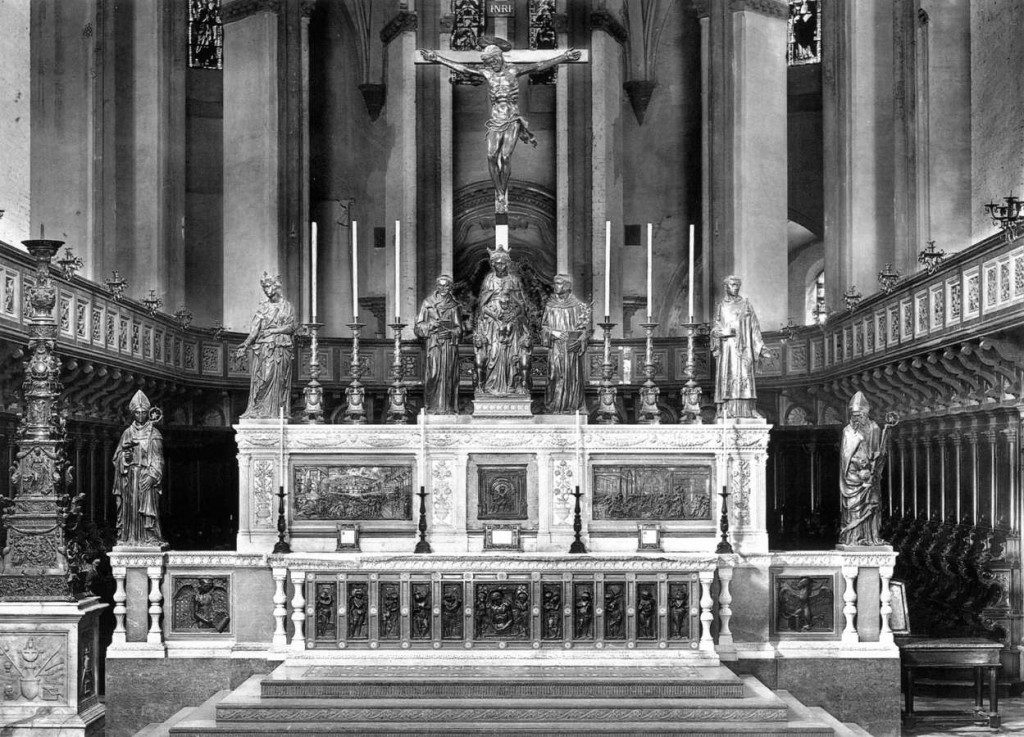