All Banning Abortion Does Is Make It Unsafe (Rebuttal Part 2) 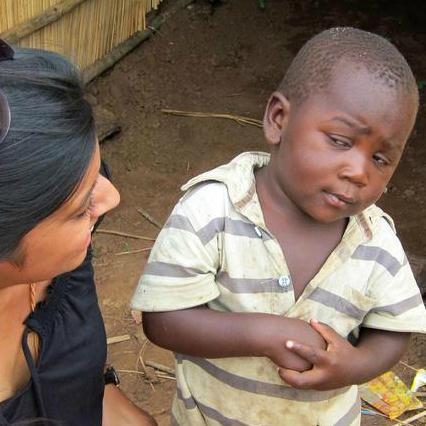 We move swiftly to Libby Anne’s second claim in her wonderful post denouncing the pro-life movement:

“I learned that all banning abortion does is make abortion illegal – and unsafe. I found that almost 50,000 women worldwide die each year from unsafe abortions, and that many more experience serious injury or infertility. These deaths happen almost entirely in countries where abortion is illegal – and thus clandestine. In fact, when abortion was made legal in South Africa, the number of abortion related deaths fell by over 90%.”

It certainly did in South Africa, though the “over 90%” Anne cites is an optimistic calculation. It comes from the same Guttmacher factsheet — which I dearly hope was not the only source for her conversion — which cites the study “Dramatic decline in abortion mortality due to the Choice on Termination of Pregnancy Act” without mentioning that the study indicates a possible range in that decline — between 51.3 – 94.8%. This range exists because the numbers for abortions undergone before the legalization of abortion in South Africa are estimates based on women coming into hospitals for incomplete pregnancy (which is not necessarily a botched, back-alley abortion, but may also be the result of a miscarriage). But let’s roll with the optimism.Whatever your views on abortion, it’s good that less women are dying while getting them, whether that’s a 50% reduction or a 90% reduction. Does this imply — as Anne implies — that when you legalize abortion, there is less abortion-related death, and when you ban abortion, there is more? Are we, the young, pro-life majority, damning women to death by seeking to ban abortion? Is our fight against abortion only making it clandestine and unsafe?

“During the 50-year study period, the MMR [maternal mortality rate] decreased from 293.7 to 18.2/100,000 live births, a decrease of 93.8%. Women’s education level modulated the effects of TFR, birth order, delivery by skilled attendants, clean water, and sanitary sewer access…After abortion was prohibited, the MMR decreased from 41.3 to 12.7 per 100,000 live births (−69.2%). The slope of the MMR did not appear to be altered by the change in abortion law.”

Abortion was made illegal in Chile in 1989. Here’s the graph of Chilean abortion-related deaths over time that I’ve helpfully annotated: 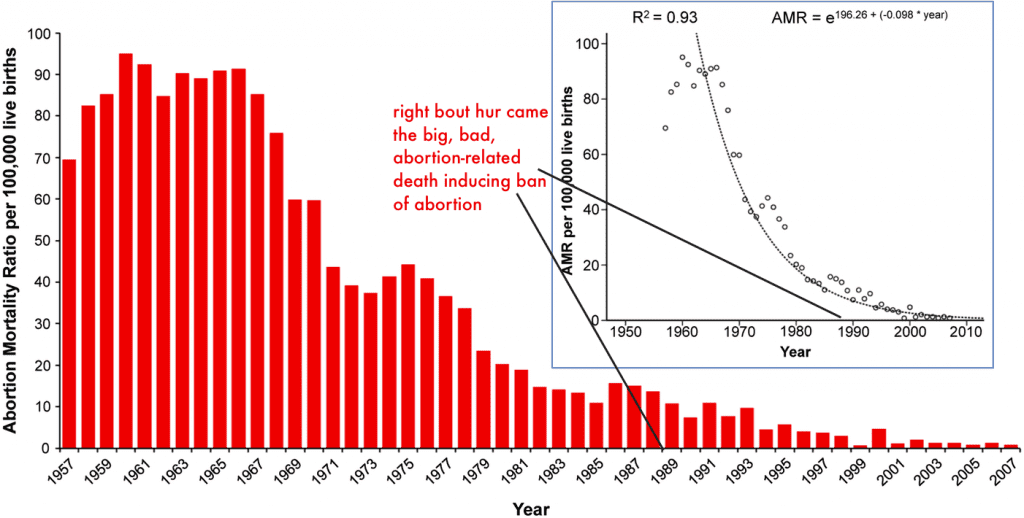 From an interview of the study’s author:

“We observed that reduction of maternal mortality in Chile was paralleled by the number of hospitalizations attributable to complications of clandestine abortions. While over 50% of all abortion-related hospitalizations were attributable to complications of clandestine abortions during the 1960s, this proportion decreased rapidly in the following decades. Indeed, only 12-19% of all hospitalization from abortion can be attributable to clandestine abortions between 2001 and 2008. These data suggest that over time, restrictive laws may have a restraining effect on the practice of abortion and promote its decrease. In fact, Chile exhibits today one of the lowest abortion-related maternal deaths in the world, with a 92.3% decrease since 1989 and a 99.1% accumulated decrease over 50 years.”

Of course, the Guttmacher Institute freaked out over this, tried to criticize the study, and got shut down by it’s author, Dr. Koch. (Read their discourse if you like the closest thing the sociological research world has to rap battles.)

But it’s not as if Chile is the only example of banned abortion being associated with less maternal death, not more. According to the 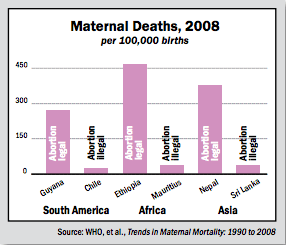 World Health Organization’s Trends in Maternal Mortality, the Central American nations of Nicaragua and El Salvador, in which abortion is completely illegal (laws passed in 2006 and 1998 respectively), have both seen a 44% drop in their maternal mortality ratios (which include abortion-related death) since 1990. Ireland and Poland both have bans on abortion, and boast of some of the lowest maternal mortality rates in the world (Poland’s maternal mortality rate has decreased 67 percent since 1990, having severely restricted abortion in 1997).

The issue is the attention, care, and respect that goes into treating and aiding pregnant women. Anne’s boast that South Africa has seen a decrease in abortion-related deaths rings hollow when we read the report that last year,

“South Africa’s commitment to reduce maternal deaths under the United Nations millennium development goals is headed for a crashing failure, amid reports that the number of women dying in childbirth in Africa’s most industrialised country has quadrupled in 20 years.”

What should be absolutely primary for the health and protection of pregnant women is not the legalization of abortion but the education of women, increased attention and funding to medical facilities, clean procedures, professional midwifery and gynecology. The lessons of Chile and South Africa have made it clear that while legalizing abortion may reduce abortion-related deaths to a point, a far more effective way to achieve the same goal is to give women better than abortion — to give them care. The legalization of abortion is unnecessary, and worse than that, it draws attention away from the actual problem.

Throughout her entire denouncement of the pro-life movement, Anne has never denied that the unborn child is a unique human life, worthy of being treated equally under the law. Granted, I’m no Guttmacher researcher, but it seems that if women are being hurt by the unsafe destruction of their children, the solution should not be to legalize and thus institutionalize this destruction, but to work to eliminate a woman’s motivation to do such a thing. To promote opportunities for education, to lift women out of poverty, to create a hospital environment in which birth is not a massive health risk, to teach the reality of fetal development, to create a culture of adoption, love for the child, and respect for women: This is what it means to be pro-life, not to see a problem and provide an institution in which that problem can “safely” continue, but to fix the damn problem.

Abortion always hurts two. It kills the child, and the 2012 study “Reproductive history patterns and long-term mortality rates” has found that abortion increases the mother’s likelihood of death: The “increased risks of death were 45%, 114% and 191% for 1, 2 and 3 abortions, respectively, compared with no abortions after controlling for other reproductive outcomes and last pregnancy age.”

If the pro-choice movement wishes to wave the pro-woman banner, they should stop pushing abortion on demand around the world and start giving alms to the poor, helping the sick, influencing the culture, establishing life-giving medical centres and working to destroy those motivations towards abortion that make women feel as if they have no other choice but to harm another and themselves. The pro-choice movement are right about the problem, but dead wrong about the solution. Truth requires a deeper look.

November 1, 2012
How I Lost Faith In The Pro-life Movement: Rebuttal Up In Hurrrrr (Part 1)
Next Post