The gentleman we can blame for hipsters and a prolific collection of beautiful, anti-establishment prose was a Catholic. He was no angel, and certainly not a practicing Catholic (he stopped attending Mass at 14), but it has been rightly pointed out that Jack Kerouac never left his Catholicism. The beat revolution — which later seemed to think Kerouac was advocating moral relativism and playing crap music in coffee houses (which led to the hippies, who led to the hipsters) — largely misunderstood Kerouac’s writing and philosophy, which was informed by a rich, pre-Vatican II Catholicism. From a biography by Dennis McNally, Desolate Angel:

“He was obsessed, enraged, with a sense of America being debauched by the clanking, alienating horror called the new industrial state. Secondly, his rage was cut with a sense of Dostoyevskian suffering and guilt, for he felt that the American citizen’s complicity in the exploiting modern state went far too deep to be ‘solved’. Racism and violence were not issues — “Issues” he’d say with a curling sneer, “F*ck issues” — but sins, and for that only penance was possible.”

His coining of the term “the beat generation” comes from “the beatific generation”, for — despite all the sin, desperation, existential displacement, and drug abuse — Kerouac believed that his generation would see God. “Beatific generation” was inspired by a vision Kerouac had of a statue of the Virgin Mary turning her head toward him. He said:

“It is because I am Beat, that is, I believe in beatitude and that God so loved the world that He gave His only begotten son to it… Who knows, but that the universe is not one vast sea of compassion actually, the veritable holy honey, beneath all this show of personality and cruelty?”

I found an excellent article, “The Conservative Kerouac”, that summed up the depth of his Catholic roots quite well:

“The Catholic Church is a weird church,” Jack later wrote to his friend and muse Neal Cassady. “Much mysticism is sown broadspread from its ritual mysteries till it extends into the very lives of its constituents and parishoners.” It is impossible to overstate the influence of Catholicism on all of Kerouac’s work[…]The influence is so obvious and so pervasive, in fact, that Kerouac became justifiably incensed when Ted Berrigan of the Paris Review asked during a 1968 interview, “How come you never write about Jesus?” Kerouac’s reply: “I’ve never written about Jesus? … You’re an insane phony … All I write about is Jesus.”

But wasn’t Jack Kerouac, author of “Dharma Bums”, a Buddhist? He spent a long time flirting with Buddhism, in a similar way that Thomas Merton — who Kerouac loved — thought there was much common ground between Buddhism and orthodox Catholicism. But Buddhism ultimately held no sway on the man. Experiencing a nervous break down, he realized that “was the night of the end of Nirvana…I realized all my (years of studying) Buddhism had been words, comforting words, indeed, but when I saw those masses of devils racing for me.”

Now don’t get me wrong, we should be praying for the man’s soul. His life was an unhappy one. But he carried on a beautiful, Franciscan-like search to see the face of God, overwhelmed by the sense that all things are holy. There are few writers who have so clearly pointed out — to me, at least — man’s longing for the divine.

This one made my 5 Things No One Knows Are Ridiculously Catholic list a little while ago, but I believe it worth the repost:

Somewhere in the bowels of a Grateful Dead apparel store, on the clothing rack next to the incense sticks, you’re bound to find a shirt with this guy on it…

…usually plastered along with a great quote like “The white man knows how to make everything, but he does not know how to distribute it.” And thus Chief Sitting Bull is claimed as a free-thinking, proto-liberal, tolerating sort of fellow who surely would’ve been down with abortion and all the rest. But it’s a conveniently cropped picture. Here’s the real deal:

Can you spot the difference? It’s the rocking of Jesus Christ dying on a cross around his neck. The best evidence points to Chief Sitting Bull as a baptized Catholic, though he was never fully received into the Church on account of having two wives and being unable to choose between the two. (You know how it is.)

Now Salvador Dali, by all rights, shouldn’t have ended up a Catholic. His father — atheist extraordinaire — put him in a state-sponsored school to help him avoid the idiotic teaching of priests. For most of his life, Dali looked like he was going to live up to his father’s expectations. This painting… 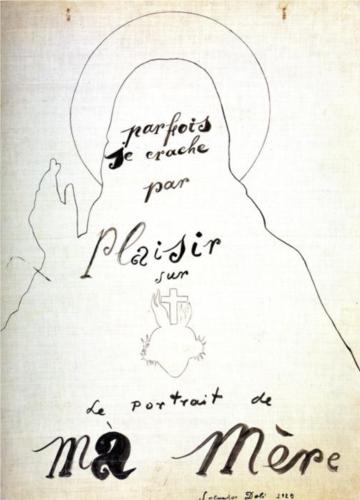 But against all odds, by the 1940’s, Dali became convinced that there must be a God. He expressed it paradoxically: “I believe in God but I have no faith. Mathematics and Science tell me that God must exist but I don’t believe it.” He lacked faith, but he could not deny that science, and especially quantum mechanics, was rendering materialism — the idea that the material world is all that exists — bunk. In 1947 he asked a Franciscan friar to exorcise him of a demon, and made him a crucifix as a gift for doing so. In 1949 he had an audience with Pope Pius X11, showing him this:

The Pope, recognizing it was really cool, blessed it. 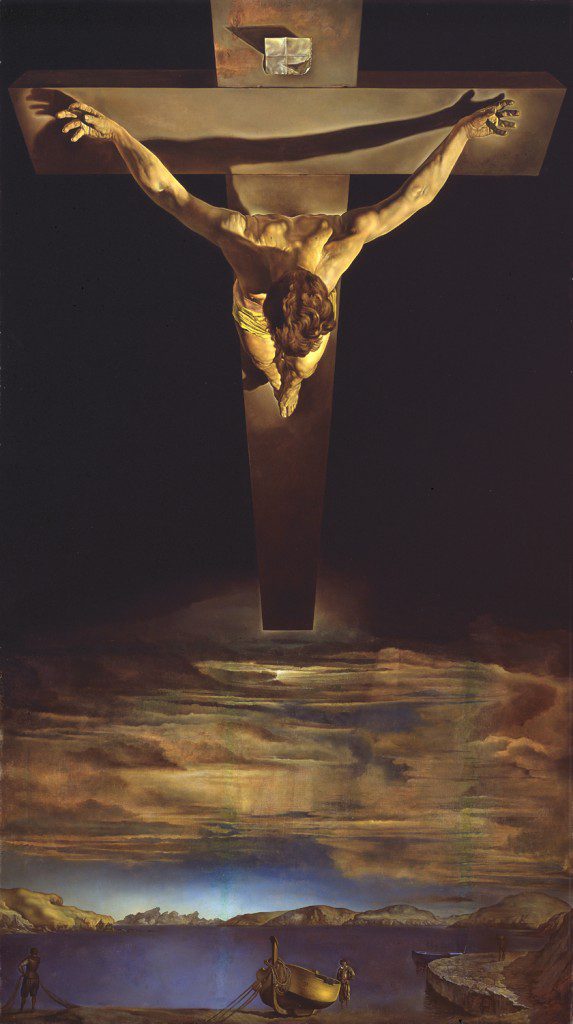 In 1951 he wrote the excellent, prideful-to-the-point-of-hilarity, Mystical Manifesto, renouncing his surrealist contemporaries for creating art “directly from the tube of their biology without mixing in it even a bit of their heart or soul” and instead taking up the mysticism of the holy Saints, claiming that “the decadence of modern painting was a consequence of skepticism and lack of faith, the result of mechanistic materialism…”  From the Manifesto:

A brilliant inspiration shows me that I have an unusual weapon at my disposal to help me penetrate to the core ofreality: mysticism -that is to say, the profound intuitive knowledge of what is, direct communication with the all, absolute vision by the grace of Truth, by the grace of God. More powerful than cyclotrons and cybernetic calculators, I can penetrate to the mysteries of the real in a moment… Mine the ecstasy! I cry.

The ecstasy of God and Man. Mine the perfection, the beauty, that I might gaze into its eyes! Death to academicism, to the bureaucratic rules of art, to decorative plagiarism, to the witless incoherence of African art! Mine, St. Teresa of Avila!… In this state of intense prophecy it became clear to me that means ofpictorial expression achieved their greatest perfection and effectiveness in the Renaissance, and that the decadence of modern painting was a consequence of scepticism and lack of faith, the result of mechanistic materialism. By reviving Spanish mysticism I, Dali, shall use my work to demonstrate the unity of the universe, by showing the spirituality of all substance.”

And you know what? He really did. His work got pretty awesome. He didn’t become a Saint overnight though, and his conversion was messy, so don’t forget to pray for his salvation.

The Duke was raised Presbyterian, married thrice — each time to a Catholic — and converted to Catholicism, obtaining the state of grace a few days before his death. One of his grandsons is now a priest. 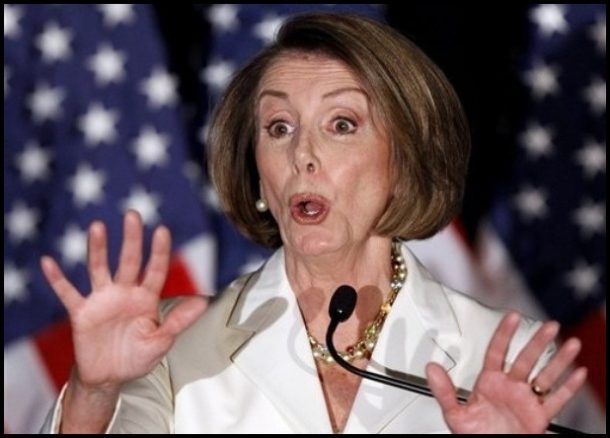 December 28, 2012 Why Are Catholics Still Whining About the HHS Mandate?
Recent Comments
0 | Leave a Comment
"I don’t know what bible your reading, but if you really think Jesus wanted his ..."
George In Defense of Covering Catholic Churches ..."
"1. Conflates a child's sense of wonder with religion.2. Untold thousands of children have been ..."
Lucius 3 Arguments Atheists Aren’t Allowed To ..."
"Brilliant and mind opener. You're hot! Jajaja"
agusq1970 Modesty Sets Fire
"Great quality content man, I am really impressed with this one. Thanks for sharing this ..."
diksha gupta Culturally Catholic, Baby.
Browse Our Archives
Related posts from Bad Catholic

Catholic
Get Thee (Or Your Friend) To a Nunnery
Bad Catholic

Catholic
Christopher West's At the Heart of the Gospel...
Bad Catholic
TRENDING AT PATHEOS Catholic