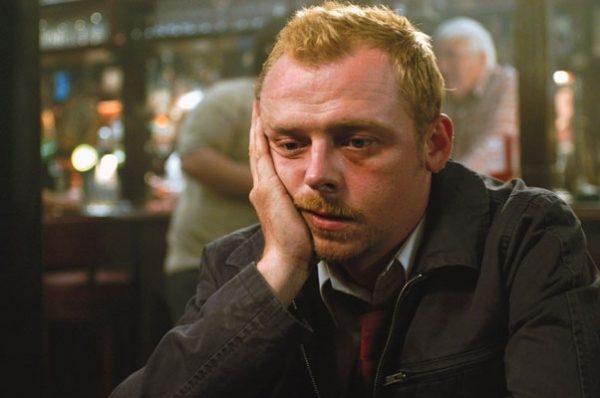 If we were decent, self-respecting animals, we would naturally prefer good environments — in which all our needs were met — over bad ones. As it turns out — and as a brief survey of popular culture makes apparent — we are currently thirsting for an environment in which all our needs are threatened by animated corpses seeking to slurp out our brains through crazy straws. I speak, of course, of the Zombie Apocalypse.

The Zombie Apocalypse has become such a common part of daily discussion amongst my generation that we should take a brief moment of silence to contemplate the utter strangeness of the phenomenon.

Zombie movies are being born faster than gnostic heresies. We’ve gone from possessed-corpses-rising-from-graves to the viruses of 28 Days Later and The Walking Dead. We’ve gone from screaming, helpless women being rescued by attractive non-zombie-men, to frighteningly realistic, gritty end-times, erryone-dies scenarios. In short, we are doggedly trying to push the Zombie genre from fantasy to the real world.

And this transition isn’t limited to fiction: There are countless books and websites devoted to surviving the apocalypse. Embedded in the subconscious of every suburban teenager is a plan regarding What To Do When the Zombies Attack. We’ve got awkward TV shows documenting people who really do believe — at least for as long as they’re on TV — that the End is Extremely F****** Nigh:

The Center for Disease Control and Prevention has released Preparedness 101: Zombie Pandemic (They later made a statement denying the existence of zombies. (Thanks, federal government.)) The U.S. military started holding zombie invasion exercises. News channels can’t stop hinting that their just might — just might — be something to this whole zombie craze: DID ZOMBIES ROAM MEDIEVAL IRELAND? and DEADLY FUNGUS TURNS ANTS INTO ZOMBIES! being among my favorites. And then we have to deal with actual studies on zombification, and Cracked’s classic 5 Scientific Reasons a Zombie Apocalypse Could Actually Happen.

Now what interests me is not so much why our culture is mildly obsessed with the total annihilation of our culture, but why contemplating this annihilation makes us so darn happy. And it certainly does make us happy. As the common phrase attests: 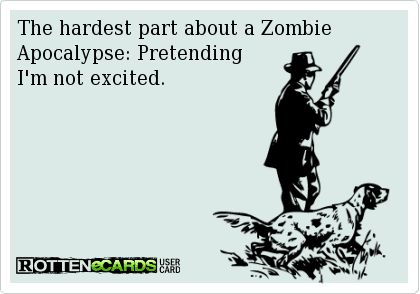 The world ending, which is supposed to be the sum of all fears, has provided more delightful escapism for the bored than any utopia could. There are few men — I cannot speak for the women — who have not imagined themselves taking up arms, turning their house into a bunker, and saving their loved ones.

Yet this is precisely what is supposed to not be the case. We have been told, and told, and forever told, that man thrives by way of comfort and need-fulfillment. He loves a good environment and hates a bad one. If we were to add to Washington D.C.’s collection of monuments a testament to the ethos of our age, it would be a marble cube emblazoned with the words “Avoid Suffering.” Convenience is the Christ of the hour.

Thus we are to start families — because we have a need for family — but only on the condition that we can legally leave that family when it becomes a point of suffering for us. We are to have food and drink, but it must be fast, convenient, cheap, and already known. (Woe betide the town that doesn’t have a Taco Bell.) We are to have a religion — because what real American doesn’t, right? — but not to the point of extremism. We are to live our religion insofar as it gives us a “church community” and other pleasant feelings, not to the point where we are called to suffer for it, bother anyone else with it, radically change our lifestyle for it, damage our reputation in its name, or actually follow its demands and give our money to the poor. We are to have sex lives, for sex is a need, but we are to avoid children, for children are inconvenient. In all things, fulfill needs, and suffer less.

But creeping underneath this bored and boring age is a strange, but oh-so-human desire for the entire edifice to burn. Man was not made for convenience, but for greatness. He was born for more than mere contentment. A thought experiment from Walker Percy elucidates this well: 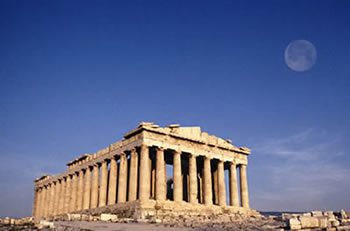 Imagine you are a member of a tour visiting Greece. The group goes to the Parthenon. It is a bore. Few people even bother to look — it looked better in the brochure. So people take half a look, mostly take pictures, remark on serious erosion by acid rain. You are puzzled. Why should one of the glories and fonts of Western civilization, viewed under pleasant conditions — good weather, good hotel room, good food, good guide — be a bore?

Now imagine under what set of circumstances a viewing of the Parthenon would not be a bore. For example, you are a NATO colonel defending Greece against a Soviet assault. You are in a bunker in downtown Athens, binoculars propped up on sandbags. It is dawn. A medium-range missile attack is under way. Half a million Greeks are dead. Two missiles bracket the Parthenon. The next will surely be a hit. Between columns of smoke, a ray of golden light catches the portico.

Are you bored? Can you see the Parthenon?

The saying “you never know what you’ve got till it’s gone” isn’t true. You may know precisely what you have when you can fully conceive of the possibility of not having it. You can see the Parthenon when it’s about to blow up, and you can love your neighbor, adore the good earth, and take hold of human life as an infinitely precious gift the moment the rotting horde threatens the earth, your neighbor and your life, and you are forced to fully conceptualize that The Lord can giveth, and the Lord can taketh away.

The fact of the Zombie Apocalypse has the tremendous effect of stripping away our obsession with comfort and convenience, forcing us to value life and the living of it. All that we truly want to discard, but in our weakness cannot, is happily discarded for us: Our stupid arguments with our siblings pale when the first window breaks. Our constant desire to just get a little more money, a little more pleasure, or a little more status is blown up with the zombie heads. Our constant, nagging questions — does life matter? Am I truly living? — are answered when life is threatened.

This is simultaneously the awesomeness and the sadness contained within our obsession over the zombie apocalypse. It is a dream of something being done for us, that in reality, we alone can do. We will not — in our weakness — shake the tyranny of convenience. We will not love passionately, forgive faults, see the world as beautiful, value human life and personal existence with profound reverence, live courageously, face death without whimpers, and otherwise rip ourselves from the state of boredom. Not unless we are forced to.

So have my prediction for the coming age: The more bored we become, the more convenient our lives, and the further we remove ourselves from suffering, the more zombie movies we’ll make, the more apocalypses we’ll predict, and the more we’ll speak — with happy smiles — of the destruction of all human existence. But if a man could live as if he knew not the day nor the hour; if he could, against all odds, live what human existence truly is — A Personal Apocalypse — then perhaps he could truly live.

Until then, we’ll be the walking dead.

December 18, 2012
In Defense of Silence Over Gunmen
Next Post

December 20, 2012 5 People It's Easy to Forget Are Catholic
Recent Comments
0 | Leave a Comment
"I don’t know what bible your reading, but if you really think Jesus wanted his ..."
George In Defense of Covering Catholic Churches ..."
"1. Conflates a child's sense of wonder with religion.2. Untold thousands of children have been ..."
Lucius 3 Arguments Atheists Aren’t Allowed To ..."
"Brilliant and mind opener. You're hot! Jajaja"
agusq1970 Modesty Sets Fire
"Great quality content man, I am really impressed with this one. Thanks for sharing this ..."
diksha gupta Culturally Catholic, Baby.
Browse Our Archives
Related posts from Bad Catholic