Getting a Little More Detailed with the Contraception/Abortion Connection

Getting a Little More Detailed with the Contraception/Abortion Connection June 3, 2013 Marc

Scott Alexander recently published a critique of a post of mine. He argues against the idea that there is a positive correlation between contraceptive use and abortion. The man is far more educated in this field than I am — I can only venture into the soul-sucking scene of statistics if I mutter “you’re screwing this up, you’re screwing this up,” in a self-soothing fashion — and he certainly cuts my argument down to size. I think he misses a few crucial details, though. I want to address them so the discussion continues, because honestly, I’m growing a little sick of the mantras on either side, the obviously shaky “contraception reduces abortions” and the equally in-need-of-qualification “contraception leads to abortions.” A little dialogue may bring a little certainty.

Alexander starts by showing some love for the principle of risk compensation, which holds that if we introduce a technology that lowers our risk of pregnancy — like condoms or oral contraceptives — we’ll feel more comfortable engaging in the act which leads to pregnancy in the first place, namely, sexy sex. This compensation could very well undo all the noble work of our rubbers and hormones — or it could make things worse. Says Alexander:

So if these contraceptive methods make people about ten times more willing to have sex when they don’t want pregnancy – not at all hard to imagine! – they could raise the unintended pregnancy rate and therefore the abortion rate. 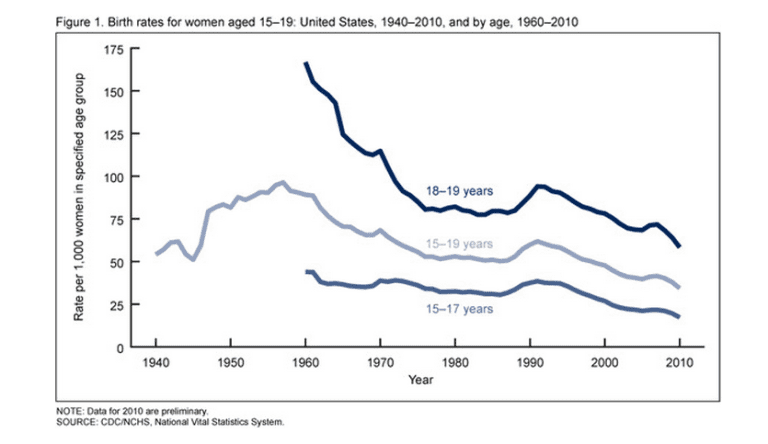 We notice an especially sharp decline around 1960, the year the Pill was introduced. Abortion wasn’t legalized until the 70s and was pretty uncommon before then, so we can leave it out of this analysis and say that it sure looks like the invention of a new form of contraception decreased pregnancies.

Alexander counts this as a “point” for the contraception-lowers-abortions spiel, but I’m not so sure, and I’d love to hear Alexander address my ambivalence. What his data shows is not the reduction of teen pregnancies (though they might have been reduced) but the reduction of teen birth rates. This is important, because while abortion cannot reduce pregnancy rates, abortion can — and does — reduce birth rates, and I’d like to make an argument that it may have been abortion, and not just Pill use, that caused the teen birth rate to drop.

It’s true that abortion wasn’t legalized until 1973, in Roe v. Wade. But if we look at the events leading up to Roe v. Wade, a clear pattern emerges: The increased liberalization of abortion laws and the growing advocacy for legal abortion (indicative of a social change which would find abortion more morally acceptable).

For instance, in 1959 the American Law Institute (ALI) proposed a new code that would legalize abortion for reasons including the mental or physical health of the mother, pregnancy due to rape and incest, and fetal deformity. By 1966 Mississippi had liberalized their abortion laws, and by 1967 California, Colorado and North Carolina had taken up the ALI’s new penal code. By 1969 they were joined by Georgia, Maryland, Arkansas, Delaware, Kansas, New Mexico and Oregon, and in the meantime, President Johnson publicly called for a repeal of all abortion laws. This pre-Roe trend of liberalization culminated in 1970, when Hawaii, New York, Alaska and Washington repealed their abortion laws and allowed abortion on demand.

The time between 1960-Roe, the time the Pill was introduced and began its proliferation, was also a time of increasing political, legal, and social acceptance of abortion. (This is hardly surprising. (Roe v. Wade didn’t come out of nowhere.)) The numbers show a similar story, and it’s here I really begin to doubt “the Pill decreased teen pregnancies (and thus abortions) between 1960-1973” narrative, or at very least begin hankering for all sorts of distinctions, qualifications, etc. 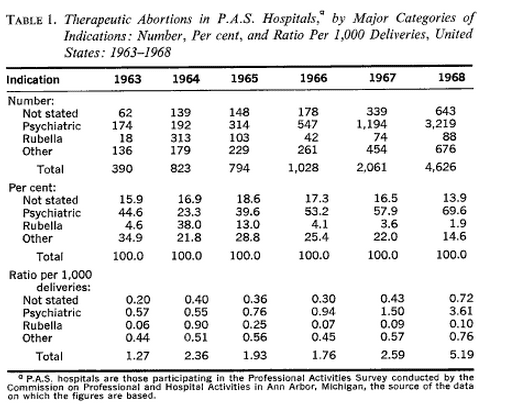 And the CDC reports that by 1972, the year before Roe, well, squint at it yourself: 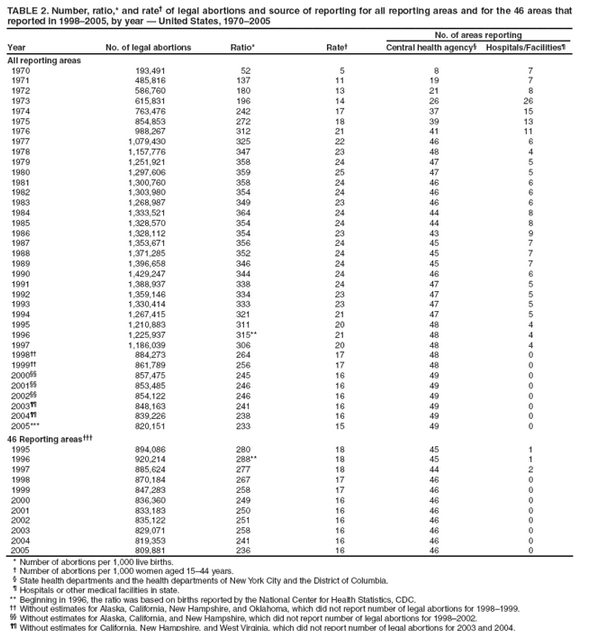 So the abortion rate was 13 per 1000 women in 1972, more than double its rate just 2 years prior. (2) If those hospital surveys are remotely accurate (and if we’re going to error on the side of contraception being the bees knees), we’re look at a very substantial increase in reported abortions between 1960 and Roe. Again, this is hardly controversial. It’d be odd if the law establishing the United States as a country permitting abortion wasn’t preceded by a rise in and acceptance of abortion. But if this is the case, what are we to make of Alexander’s ruling out of abortion as a major factor reducing teen birth rates between 1960-1970?  It seems premature. Especially considering that teenage marriages (14-18) were decreasing in popularity during this same period, a decrease which probably brought its own (minor) reduction to the teen pregnancy rate: 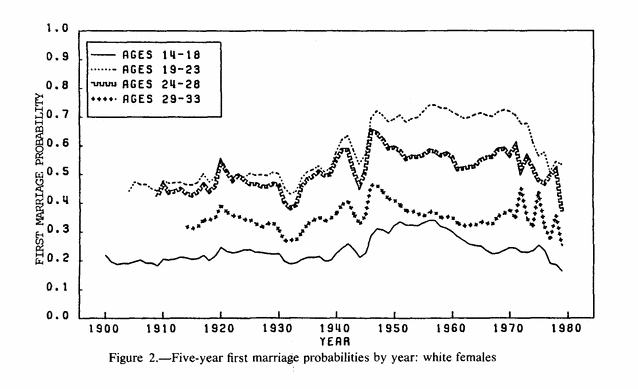 If there was a massive increase in contraception use alongside the (relatively) mild increase in abortion, I might be more willing to agree and say yes, it was contraception that reduced teen birth rates, not abortion, but the 1960-1970 increase in contraceptive use was unremarkable. The study “First Premarital Use of Contraception” published in Studies in Family Planning took data from the National Survey of Family Growth and found that contraceptive use at first premarital intercourse was 38.6% at the beginning of the 1960’s and just 41.5% by the end. Granted, use was getting more effective, as Pill use went from 4.2% to 9.0%, but given that this increase in Pill use rose simultaneously with an increase in abortion between 1960-1970, it seems unlikely that we can say “it was just the Pill,” especially if we take the principle of risk compensation seriously, which Scott Alexander seems to. 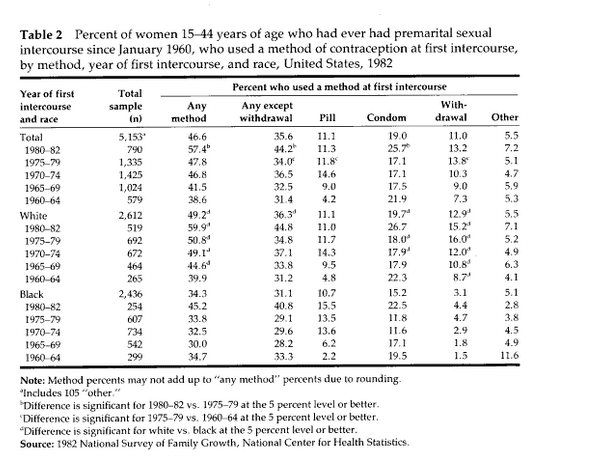 All of this to say, no, I don’t think the “pro-contraceptive argument” gets a point for teen birth-rate reductions between 1960 and Roe, not without the aid of a subsequent rise in abortion, which is ultimately my point, that a rise in contraceptive use and a rise in the incidence of abortion go hand in hand. To put it another way, the increased acceptance, provision, and use of the Pill probably helped lower that teen birth rate, but it also created a demand for abortion, which also lowered the teen birth rate. That Scott Alexander seems to agree with, and we’ll talk about in the next post.

June 3, 2013 The Contraception/Abortion Connection: Part Two
Recent Comments
0 | Leave a Comment
""You know, it's not Christian to assume I am a bimbo just because God created ..."
Makishima Women Swiftly Running Out Of Things ..."
""...it can come on handy when I need a favor." "Women hate me for this. ..."
Makishima Women Swiftly Running Out Of Things ..."
"There would be fewer Muslims if they were not afraid for their lives to convert ..."
Maria Combe A Pagan Prophecy
"I know one excellent company which could make perfect ecommerce website strategy, which has proven ..."
Marry Jane On Catholic Design
Browse Our Archives
get the latest from
Catholic
Sign up for our newsletter
POPULAR AT PATHEOS Catholic
1