Towards a Truly Compassionate Eugenics

Eugenics is back, tied to unthought ideals of freedom and compassion that lend it an exciting sucrose flavor — and keep us from ever calling it eugenics.

Back in the good old 100 years ago, if you happened to be one of those humans deemed “unfit” by society, your sterilization was simply required. Over 30 American states had mandatory sterilization laws to be applied to some combination of “confirmed criminals,” “insane persons,” “idiots,” “degenerates,” “imbeciles,” and “rapists.” The Supreme Court, overwhelmingly certain that these laws were brilliant ideas that in no way violated a person’s right to life, liberty and the pursuit of happiness, confirmed in Buck v. Bell that arresting a mentally handicapped woman and snipping her fallopian tubes was constitutional as all get out. Writing for the majority, Justice Oliver Wendell Holmes said:

It is better for all the world, if instead of waiting to execute degenerate offspring for crime, or to let them starve for their imbecility, society can prevent those who are manifestly unfit from continuing their kind.

And thus we managed to sterilize of 60,000 human beings. God bless America. This at least, was the glowing sentiment of the Nazi party, who lauded us as their number one inspiration in the compassionate war against the unfit, the mentally handicapped and the criminal: 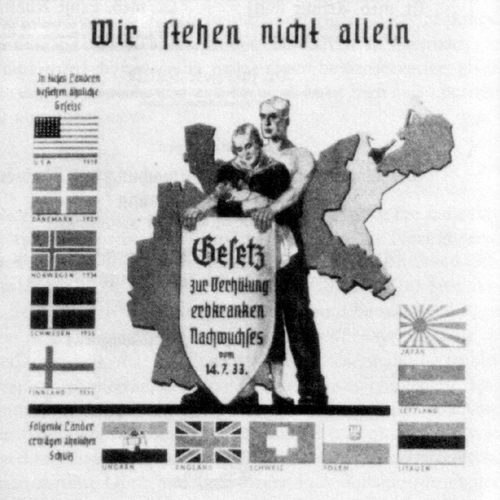 “There is today one state,” wrote Hitler, “in which at least weak beginnings toward a better conception [of immigration] are noticeable. Of course, it is not our model German Republic, but the United States.”

Hitler proudly told his comrades just how closely he followed the progress of the American eugenics movement. “I have studied with great interest,” he told a fellow Nazi, “the laws of several American states concerning prevention of reproduction by people whose progeny would, in all probability, be of no value or be injurious to the racial stock.”

The Nazi eugenics program, for which the United States bears a hefty portion of responsibility, sterilized over 350,000 human beings. Since there was no Godwin’s law in effect at this point in history, the argument “Holy @#%, we’re just like the Nazis” had a far fairly sobering effect, and now we (generally) agree that forced sterilization is a Very Bad Thing. After all, the last legal forced sterilization was performed in Oregon in the far-off, oh-so-distant year of 1981. Past history, right?

Maybe. We would no longer dare force a sterilization in the way our enlightened grandfathers did. Now, if people are to be sterilized, they must consent. This would all be beautiful, except that now — and increasingly — we pressure, bribe and guilt-trip people in order to get that consent. We are less the rapist and more the seducer, and we have Nazism to thank for the fact — outright force contains an embarrassing resonance of their atrocities.

So when the California prison system was called to task in a remarkable piece of investigative journalism for sterilizing over 150 female inmates there was little discussion over the ethics of the sterilizations themselves, only of the prisons acting without state authorization. The sterilizations weren’t forced. The women sterilized agreed to them. It wasn’t wrong, it was a social service! But no, a deeper look into the actions of the California prisons makes this justification of “consent” feel all sorts of awkward.

One former Valley State inmate who gave birth to a son in October 2006 said the institution’s OB-GYN, Dr. James Heinrich, repeatedly pressured her to agree to a tubal ligation.

“As soon as he found out that I had five kids, he suggested that I look into getting it done. The closer I got to my due date, the more he talked about it,” said Christina Cordero, 34, who spent two years in prison for auto theft. “He made me feel like a bad mother if I didn’t do it.”

Cordero, released in 2008 and now living in Upland, Calif., agreed, but she says, “today, I wish I would have never had it done.”

It is “illegal to pressure anyone to be sterilized or ask for consent during labor or childbirth.”

Yet, Kimberly Jeffrey says she was pressured by a doctor while sedated and strapped to a surgical table for a C-section in 2010, during a stint at Valley State for a parole violation. Jeffrey, 43, was horrified, she said, and resisted.

“He said, ‘So we’re going to be doing this tubal ligation, right?’ ” Jeffrey said. “I’m like, ‘Tubal ligation? What are you talking about? I don’t want any procedure. I just want to have my baby.’ I went into a straight panic.”

Having the people in charge of your freedom tell you to be sterilized isn’t being forced into sterilization, it’s being pressured. In the mind of those who think consent alone makes sterilization fine and dandy, the mere fact of attained permission may be more than enough justification for the actions of the California prison, but for those who think that consent should be full, informed, and given in freedom — and as far from pressure as possible — these anecdotes render the California prison system’s sterilizations reprehensible.

But this is the new eugenics: Because we’re nice people now, we can’t force sterilization, we can only apply the proper pressure. We have moved from the fascist model to the compassionate capitalist model: We’re not making you get sterilized, we’re making you want to be sterilized.

Consider the fine work of Project Prevention, an organization that pays drug addicts 300 dollars to get sterilized. Their motivation is compassion for children, their desire to alleviate suffering authentic, and they would never promote the sterility of men and women on drugs without consent. Nevertheless, Project Prevention should be set on fire and pushed off a cliff.

Sterilization — outside of the uncertain, expensive and difficult work of reversal — is permanent. To offer a drug addict in the grip of addiction 300 bucks to permanently rid himself of fertility is not to offer him the opportunity to consent in freedom. It is to offer him the opportunity to consent to sterilization within the slavery of his drug addiction. A woman addicted to drugs wants money to feed her addiction, to feed — in a real way — her illness. To offer her money for sterilization is to offer her a method of feeding this psychological and physiological addiction. The carrot Project Prevention waves in front of her nose is a bribery beyond 300 bucks, it is bribery that pulls at the sick, wounded body and soul of a person who will do anything for a fix. That we pat ourselves on the back because our ends our good — a world without drug-addicted parents and children — and we have stickers of consent fits perfectly with 21st century ethics — and remain perfectly unsatisfactory.

Our new, compassionate eugenics is based on a false negation of freedom and possibility in the human person. We permanently disable a person’s fertility on the basis of a temporary situation. That a woman is oppressed by poverty may very well be true, and that raising a child in the situation of poverty may be immensely difficult is likewise. However, poverty is not necessarily permanent. Poverty may be alleviated, whether through the charity of others, a return to justice within the person’s community, or a successful “rising above.” Nevertheless, the California prison system pressured inmates into sterilizations on the basis of permanent, determined poverty, as an effort to “save in welfare paying for these unwanted children – as [these women with prison records] procreated more.”

That drug abuse is an awful environment in which to raise a child is undeniable, but drug abuse is not a permanent, determined reality within a human person. A mother involved in criminal activity may be less able to provide for her child than a non-criminal mother, but being involved in criminal activity is not a determined reality — it is a choice. To meet these immensely difficult yet solvable problems with the permanent solution of sterilization is fundamentally inhuman, an act of despair that cannot believe in the possibility of a human person changing their lives for the better, and thus seeks to alter their bodies, forever.

Until the 1980’s, we forcefully sterilized the “unfit” to better our race — that it might be free of poverty, crime and hereditary disease. Now we pressure a group of people we do not call “unfit” (who nevertheless fit in precisely the same category that our grandfathers made for the term, that of the handicapped, the criminal, and the poor) to be sterilized for their own sake, and for the sake of their children. Get ready for a eugenic comeback fueled by good feelings — and read Eugenics and Other Evils by G.K. Chesterton in preparation.

August 24, 2013 Fortunate Fall
Recent Comments
0 | Leave a Comment
"All political art is lame?"
George Arnold Ghosts With Erections
"I don’t know what bible your reading, but if you really think Jesus wanted his ..."
George In Defense of Covering Catholic Churches ..."
"1. Conflates a child's sense of wonder with religion.2. Untold thousands of children have been ..."
Lucius 3 Arguments Atheists Aren’t Allowed To ..."
"Brilliant and mind opener. You're hot! Jajaja"
agusq1970 Modesty Sets Fire
Browse Our Archives
Related posts from Bad Catholic