Thank you all so much for your prayers. Liam’s surgery went very well, he is home and fairly cranky but otherwise fine. I only cried for fifteen minutes, and managed to pull it together enough to read ten whole pages of the book I brought with me. It was disjointed reading, though, because every time a door opened I looked up frantically.

The plight of a mother.

#7
The Hospital
where Liam’s surgery was (and also where I had Charlotte) is a Catholic hospital. I find this hospital immeasurably comforting. The chain of hospitals has three different campuses. This one is the Siena campus, and outside there is a beautiful bronze statue of St. Catherine of Siena. The other two campuses are St. Rose of Lima and St. Martin de Porres. Inside the hospital, right across from the same-day surgery waiting room, is a large mural of all three saints.
I stared at the mural for a while when Liam was in surgery. St. Catherine of Siena is already a special saint for our family, as she is Sienna’s patron saint, and St. Rose of Lima is the saint I got for the year from Jen’s handy Saint’s-Name Generator. So I wondered if maybe the universe was conspiring in some weird way and telling me that these three saints would be important to our family. Like, maybe we should name our next son (if we have one) Martin?
Then I re-thought that, and I’m glad I did so. There are other ways to venerate a saint.
#6
I Really Thought 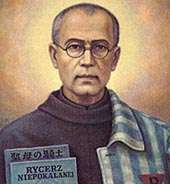 that Liam was going to be born on the feast day of St. Maximilian Kolbe, August 14. And because I had discovered this saint about a month before my due date and immediately felt drawn to him, I was bound and determined to insist that we name Liam Maximilian if he happened to be born on that day.

But he was born on August 11, which is probably good because the Ogre balked at Maximilian and doing battle in the immediate post-partum period would not have been fun. 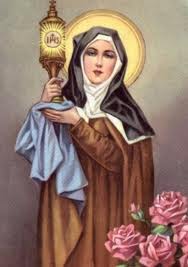 When I was an undergrad, I spent a semester in Rome. I was not Catholic at that point, and I was sadly derisive of the Catholic faith. When we were in Assisi all of my friends went to see the incorrupt body of St. Clare and kindly extended me an invitation. I refused, and then went on and on and on about how weird and creepy that whole “incorrupt” thing was. And then I made fun of St. Clare.

Since converting I’ve always felt really guilty about that, so we decided early on in my pregnancy with Liam that if he were a girl, we would name him Alice Clare. I was a little sad that we couldn’t do that because I felt that I should somehow make a place for St. Clare in this particular child’s life. But I wasn’t about to name my boy Clare.

Lo and behold, little Liam Xavier Bede arrived ahead of schedule, right on the feast day of St. Clare! How cool is that?

my idiot brother had to have surgery, too.

Why, you ask? Well, because he stepped on a sewing needle and then broke it off while trying to dig it out of his foot, of course!

It was all the way down next to the bone, was horribly infected, and they had to do big-time surgery. In fact, if they hadn’t done surgery that day, his foot would have become gangrenous and he would have lost his whole leg.

I may be exaggerating just a little. But they really did have to do surgery, and it really was super infected. And afterward he talked to me while on painkillers, and I laughed. 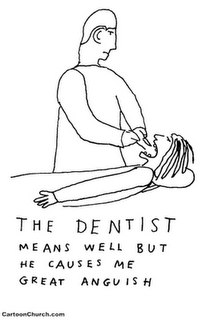 in exactly one week I have to have a tooth pulled. Unfortunately it’s a tooth that’s had a root canal done on it in the past, and I also have to have a bone graft done in anticipation of having a replacement tooth put in, which means that they’re going to put me to sleep.

This is kind of a shame, because I like laughing gas. But I’m glad I’m going to be asleep for it because according to my dentist, teeth that have been root canaled (is that a word?) tend to break and shatter, and then the dentist has to fish them out piece by piece.

Ugh. I’ll take the dreamless sleep with a side of possible death, thanks.

#2
I Just Read a Statistic 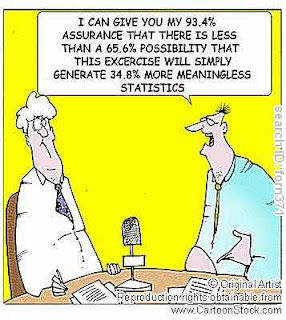 that said the risk of death under anesthesia is about the same as the risk you take when riding in a car.

This would be comforting to me if I lived in, say, Podunk, Vermont. But here in Las Vegas, when people aren’t gambling or watching women dance naked they’re running red lights as a form of entertainment. Lest you think I jest, one police officer I spoke with said that he has seen more traffic fatalities in his three years here than he did in the thirteen years he spent as a cop in Washington, D.C.

Now I feel like next Friday will be less a routine tooth extraction and more a game of Russian Roulette. Good thing I rock at roulette.

22. 22, black. Who was that guy?
(My eternal love will go to the person who can name that movie reference.)

#1
When I Was Searching for Cartoons on Statistics

I came across a really funny one that I wanted to put here, but permission is required for use.
So here’s a link. It made me giggle.

And since I can’t leave you with only six pictures, here’s a good one!

Go see Jen for more quick takes! Have a great week, everyone!