38 years ago today, Roe v. Wade was passed. No one is naive enough to think that abortions didn’t happen before that decision; the history of killing children in utero is nearly as old as civilization itself. But this court decision paved the way for abortions to come out of the back alleys and into Main Street, opening up the floodgates for millions of children to be disposed of. Most importantly, it took the debate about abortion and placed it squarely into the realm of politics, making it easy for us to look away. Or to debate it lightly. Or to forget that what’s at stake is not a political agenda, or money, or bureaucracy, or women’s rights, or even women’s health. What is at stake are the inalienable rights of these children to life.

38 years ago, our government decided that instead of being protected and given the right to live, these people could be torn limb from limb and discarded.

I’m not going to go into a debate about abortion. It is the greatest evil in the world today, and anyone who denies that is lying to themselves. There are wonderful bloggers out there who’ve written compelling, haunting and undeniable posts about this subject. I defer to their words, which are far more lucid than anything I could put together on the subject.

But who can fathom so many lives, so many faces, so much laughter that our world is bereft of?

We can’t. But maybe if I tell you one story, what we have lost will be clearer.

It wasn’t so many years ago that the Ogre and I were driving away from Fort Worth toward the country with grand plans to get away from the lights of the city so we could see the stars of the Milky Way. We were tired of school and tired of life and we wanted to find something in life that was miraculous, something that we could  marvel at. We stopped at Taco Bell on the way. About fifteen minutes later the Ogre pulled over and I leaned out of the truck and vomited.

We turned around and went back to the Ogre’s house. I was sick all night and still nauseous and tired the next day. Around noon I drove down to CVS and bought a pregnancy test. The girl behind the counter said, “Is this a good thing?”

I can’t imagine what possessed her to ask that, but the answer was definitely no. We weren’t married. I was a junior in college and he was a senior. Our lives were a terrible mess, and unlike so many young people we couldn’t claim that we didn’t know any better. We were both raised in families that understood that there is good, and there is evil. We knew that God was real, truth existed, morality was essential and virtue was to be sought. And we were both doing our desperate best to ignore all that truth, because it was inconvenient and difficult.

The test was positive.

I cried. The Ogre was quiet. I sat cross-legged on his floor, with my head in my hands, and wailed, “What the hell are we going to do now?”

Then I said, “I can’t do this.” He stood up and pulled me off the floor. He held me by my shoulders and looked squarely in my eyes and said, “That’s not up to you anymore.”

It wasn’t up to me. What was done was done. We told our parents and friends. One of my friends’ faces fell, and she said “this is the worst thing that could have happened.” Luckily for us, we were surrounded by people for whom abortion was not an option. It wasn’t thought of or mentioned, but there was an undercurrent of despair. We had ruined our lives, taken away our freedom. I had had so much potential, people would say later in the pregnancy. And now it was all gone. Now I was stuck with a baby. I was punished with a baby.

I thought it was a punishment too. I was miserable. I saw my whole life go up in flames. Everything that I had wanted, all that I had dreamed of doing, was gone. And now I was stuck with a baby.

The pregnancy was hard, in spite of the love and unconditional support of our families. I wish I could tell you that the moment Sienna was born I realized what a miracle she was and I was so grateful, but I wasn’t. I was terrified. I was afraid to lift her, afraid to change her diaper, afraid to be a mother to her. I was also horribly depressed. On the first night we were home from the hospital, the Ogre didn’t wake up to the baby crying, he woke up to me crying. And he got up, took Sienna, and let me sleep. That scenario played itself out over and over again, night after night after night for four months. I took anti-depressants just to get through the day. I didn’t love my child; she was like a stranger to me, an albatross around my neck that required feeding, changing, washing and holding.

Many people would say that I should have had an abortion. Sienna was clearly unwanted. I was unfit to be a mother. It would have been more merciful for her to have been killed.

But she was alive. After a few months the shock slowly wore off and I stopped taking anti-depressants. I started playing with my daughter, learning what made her smile, where she was ticklish, how she liked to be held when she was sleepy. I found a dimple on her left cheek that only made an appearance when she laughed. I discovered, to my amazement, that she had my fingers and the Ogre’s hobbit feet. I recognized her father’s eyes and my nose on her tiny face.

Sienna and I grew up together. When she learned to crawl one of the first things she did was try to stick her chubby little fingers into an electrical outlet. The speed of my response and the panic in my heart shocked me. I swept her off the floor and fell onto the couch with her, sobbing in terror at the danger and at my reaction. I didn’t know that I loved her that much until she was in danger.

She taught me how to suffer with someone else. When she was a year old and the Ogre was out of town at a conference she got a stomach virus. I was alone with her in our condo, trying to bring down her fever and trying to clean her up every time she vomited. Finally I lay towels down on the tile floors and sat with her in my lap for most of the day, trying to soothe her when she threw up, cleaning her as best I could, not really noticing that I was covered in vomit too.

Because of Sienna, the Ogre and I learned to love each other. We learned to be patient and to put ourselves aside. We learned that our own desires were not the most important thing in the world.

By the very fact of her existence, Sienna brought us back to God. She reminded us that He has a plan for our lives, and that she is a part of that plan. We learned that there is a greater love than we had understood or recognized before she was conceived. We learned to make sacrifices for her and for each other.

I wouldn’t be sitting here writing this today if it weren’t for that inconvenient positive pregnancy test. I doubt I would be the Ogre’s wife and the mother of his children if it weren’t for Sienna. In all likelihood, I would still be living an empty and joyless life in pursuit of my own desires.

Sienna was not a punishment. Her birth radically changed our little corner of the world. She was the road that led to grace for both the Ogre and I. She was the first grandchild for both of our parents, and has brought joy to her many aunts and uncles. She is spirited, creative, full of joy and incredibly bossy. She loves painting, Bob Marley and anime. She gets excited about helping me in the kitchen and holding her brother. She laughs hysterically every time she hears the word “poop.” She loves raspberries and bacon but refuses to believe that it’s made out of pigs. She draws pictures every day for her friends at school. When she wakes up before me in the morning she washes the dishes in the sink with copious amounts of soap and wakes me up to show me, full of pride for being so helpful. She thinks the statue of Hercules we have on a bookshelf looks a lot like her Daddy. She loves to hear stories about the saints and every time she sees a crucifix she shouts, “Jesus!” and runs up to it to hug His feet.

What a Light we’ve lost. 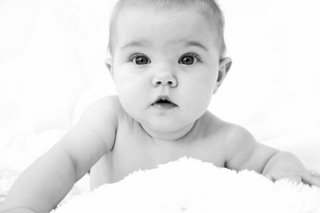 January 24, 2011 All Roads Lead to Lebanon
Recent Comments
0 | Leave a Comment
Browse Our Archives
get the latest from
Barefoot and Pregnant
Sign up for our newsletter
POPULAR AT PATHEOS Catholic
1

Is “The Chosen” Realistic to the...
Messy Inspirations
Related posts from Barefoot and Pregnant