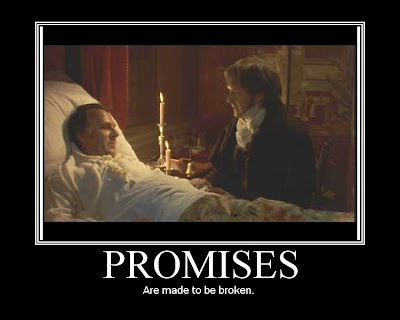 I’ll always have a very good reason why I just can’t keep my promise, a reason that’s so good, in fact, that the Ogre (who is almost always the recipient of my payment in promises) doesn’t really argue. But over the years my string of broken promises has built up. Not long ago, the Ogre snapped. He refused to accept any more of my promises.

I was a little stunned by this new development. At first, I’ll admit, I thought, well crap. How am I supposed to get what I want now? But upon further reflection, I realized that I don’t want to be that person.

What does it mean, really, that I don’t keep my promises? Essentially, it means that I am a liar and I can’t be trusted. I talk a good talk, sure, but when it comes down to it, I don’t follow through. And my husband knows it.

I’ve been making small steps to rectify this. First, I stopped promising things altogether. I started acting instead of talking about acting, which has helped. But last week, I did the unthinkable. I promised my husband that I wouldn’t blog again after Monday (today) until I finished Sertillanges’ The Intellectual Life. Yes, the same book that I mention in my Daughter of Eve post. The same book that I started a month ago and am still only a third of the way through. The same book that I wanted to throw across the room. That book.

So today, in the midst of housework, I will be furiously reading. I am bound and determined to keep my promise, so if you don’t see me for a few days, it’s because I hate that book and am dragging my feet.

But since I’m on such a roll maturity-wise, here’s a promise for you! I promise you that the next post I do will be the follow-up to my Daughter of Eve post! I have so much I want to talk about and so many people’s comments that I want to pull out of the comment box and put on the front page, so to speak. I’m hoping this post will be helpful to everyone.

So, well, here’s to keeping promises. See you guys on the other side.

February 19, 2011
Are We Lying to Ourselves About Lying?
Next Post

February 25, 2011 Daughter of Eve, the Follow-Up
Recent Comments
0 | Leave a Comment
"So what you're really saying is that you use NFP because you don't want to ..."
Naters The Super Suckage of NFP
"I'm sorry, but planning pregnancy involves using birth control. did you miss that memo?"
leesa maire All Parenthood is #UnplannedParenthood
"Without knowing that God has a purpose for everything, my sufferings in life would be ..."
Jim J. McCrea Sentimental Claptrap, Part V: God Has ..."
"Has the photo been changed? Because what's at the top right now is photo of ..."
Evelyn Sex Breasts and Babies
Browse Our Archives
Related posts from Barefoot and Pregnant