Gender Constructs? Not so much.

I’ve never really bought into the idea that gender is a construct that our society forces upon little, androgynous children.

Why, you ask? Because I was once a little girl, with a little girl for a sister and two little boys for brothers. My siblings had certain weird, sometimes cross-gender preferences. Not me, though. I liked princesses, pink, Sailor Moon and every boy who happened to cross my path. My sister liked baseball and refused to wear a dress unless she could wear her baseball cap with it. One of my brothers loved Power Rangers, but his favorite Ranger was the pink one. The other brother loved Seven Brides for Seven Brothers and 101 Dalmations.

And yet, come play time, the boys retreated to their man cave with their light sabers and capes and tried to kill each other. We retreated to our boudoir and braided our Barbies’ hair while squealing over pictures of NKOTB. Sometimes I had to play with one of my brothers, but I only agreed to play Power Rangers if I got to be the pink one and the game included a proposal after we finished beating the bad guy to death. Inevitably the game would end abruptly when my brother whacked me in the face because I was too distracted with pretending my light saber was a magical wand to defend myself. He only agreed to play Barbies if Barbie was a hostage or a war victim and Ken had to save her by means of brutality. Inevitably the game would end when I dissolved into tears at the sight of my Barbie twisted into an unimaginably contorted position. I was never comforted by the explanation that “she was really a Transformer, see!”

But never before has the ridiculous idea of “gender constructs” seemed so clearly ridiculous to me as it does now that I have a male baby.

When Sienna was little, nursing sessions would go on for hours. She liked to nurse a little, cuddle, sleep, then nurse some more. When Charlotte was little it was the same, except Charlotte’s reflux meant that cuddle time had to be cut short in favor of “sitting the baby up and praying that she doesn’t spew everywhere” time.

But Liam? With Liam, nursing time is a time of violence and pain.

He likes to eat, a lot, and quickly. He also is never satisfied with the amount of food that he’s getting, so he pinches, graps and claws at me with his raptor nails in an effort to force me to give him MORE MILK. He also, at the age of seven months, has figured out how to get his chubby little arms under my shirt and raise it up to get what he’s looking for. No public place is safe from inadvertant exposure.

When the girls were about six or seven months, we started solids. Neither of them were particularly interested. It wasn’t really until they were about a year old that solid foods really became something important in their diet.

Liam? Forget about it. Solid foods are vital to his well-being. He won’t sleep unless he’s been fed at least half a jar of baby food. He must have food. He MUST BE FED.

But feeding time? A nightmare. With the girls, they would happily open their little bird-like mouths while playing with their high chair tray or just sitting quietly. With Liam, it’s a battle to the death.

Liam doesn’t think that the amount of food held by baby spoons is enough. And somehow he is convinced that if only I would let him hold the spoon, he could get more food off of it. At first, I obliged. He would grab the spoon and then sit there, frantically sucking at it, refusing to give it back so that I could give him more food, and then eventually dissolving into frustrated wails when no more food magically appeared on the spoon. So now when we feed him, we have to either be lightening-fast, shoving the spoon in his mouth and then whipping it back out before his hysterical little hands have a chance to get their iron grip around it, or one of us has to hold him with his arms pinned down while the other one feeds him. Either way, he gets fed up about halfway through the jar of food and begins screaming.

Liam not only eats like a boy, he plays like one too. We’re partial to bouncers in our house. Sienna loved it; she would bounce gently, babbling to herself, and eventually she’d fall asleep with her cute little head resting peacefully on her folded arms. Charlotte didn’t bounce because she was afraid of the bouncer (no surprise there). Liam, however, seems to think bouncing is an Olympic sport. An Olympic sport he’s going to win, dammit.

Upon first being put in his bouncer, he’ll immediately try to grab the stationary toys around the outside and pull them to his mouth. When he can’t move the toys (and he always seems surprised to find that they don’t move) he proceeds to whine, then bounce. Violently. He jumps with all the force his chubby little legs can muster, literally shaking and moving the entire bouncer. He jumps so high that his bottom comes out of the seat and his head snaps back when he lands. After about ten minutes of such violent bouncing, the bouncer suddenly becomes silent, and I’ll look over and discover that he’s fallen dead asleep, his arms hanging limply, his head tilted to the side, his little pink mouth hanging open. Thirty seconds later he’ll wake up and begin jumping as if he’d never fallen asleep. This will repeat itself until I gather up the courage to allow myself to be clawed to death while nursing him.

His preference for toys is also telling. He likes anything that he can bang with, and any type of ball. The other night the Ogre let him play with one of our small jeweler’s hammers, and he squealed with delight, swung the hammer around like Rob Roy, bopped himself in the head, dropped the hammer in surprise, cried for 2.5 seconds, spotted the hammer again, squealed with delight, picked it up and repeated the whole process.

When his sisters got hit in the head with balls, which was frequent since I believe in throwing (soft) balls at my childrens heads so they won’t be surprised when life hits them with harsher things, they would cry. My insistence that they were really being big sissies didn’t stop their tears. When Liam gets hit in the head with balls, which is frequent since my habit of throwing balls at my children has been picked up by my daughters, he looks momentarily stunned, then resumes chewing on his toes. I don’t even have to tell him to stop being a sissy since he’s not one.

When the girls were little, they loved playing with my purses. If I left one on the floor they would figure out some way to loop it around their chubby little arms and prance off with it. This morning, Liam happened to roll across a clutch I had left on the floor. Like a typical male, he spent twenty minutes fumbling with the clasp, looking completely befuddled, and then when his sister happened to toddle within his reach he promptly picked it up, smacked her with it, and crowed in victory while she wailed and I told her to stop being such a sissy.

And then there’s the position he assumes when I hold him on my hip. It’s amazing, really. The girls would snuggle up next to me when I held them on my hip, looping their little arms through mine, patting my face, and generally being sweet and adoring. Liam, however, slings one fat arm across my shoulders like he owns me or something and then, after looking around briefly from his new vantage point, he gets down to business and dives face-first toward his food source, yanking my shirt up with his free arm.

In conclusion, let me just say this: 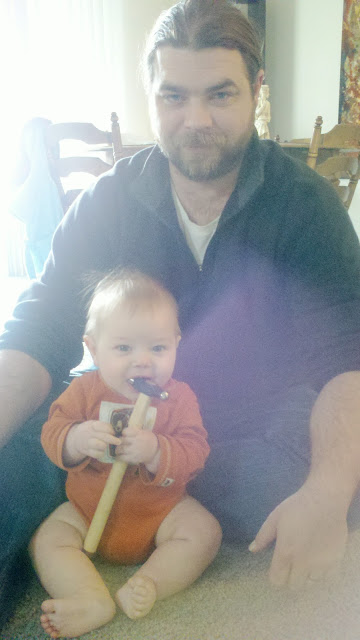 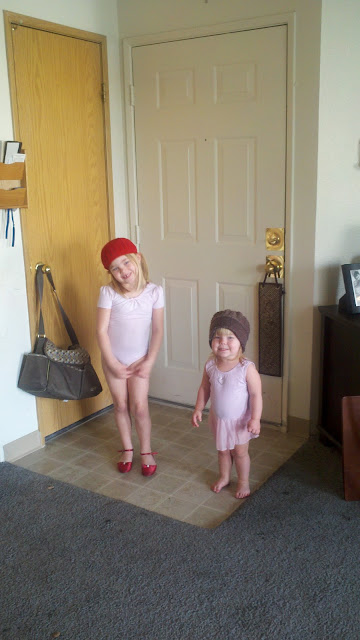 March 22, 2011 Why I'll Never Again Give Birth in a Hospital
Recent Comments
0 | Leave a Comment
Browse Our Archives
Related posts from Barefoot and Pregnant