The Exorcism of Demons

This week, I’m going to compile some responses I’ve gotten, both in the com-box and privately, to my post on men. Some of the responses are very thoughtful and many have pointed out errors in my thinking that I would like to share with you.

But today, I’m still feeling pretty weary from all the controversy, so I have decided to write about a subject that is not controversial at all: abortion!

No, seriously. That’s what I’m writing about, again. Here’s the thing about posting on abortion: I know I’m right. I don’t care how arrogant that makes me sound, because when you boil it down, I’m in favor of not killing babies. Period. No exceptions, not in cases of rape or incest, not in cases of addiction in an unfit mother, not in any case, ever. Abortion is barbaric, hideous and demonic. And the nice thing about writing that sentence is that, even if followers leave my blog in droves, I won’t be phased by it. Truth is truth is truth is truth, and I will protect the unborn with every fiber of my being, at any personal cost.

And now, from the wonderful Dr. Nadal, comes the post I read this morning about priests performing the rite of exorcism outside of an abortion mill in Illinois. 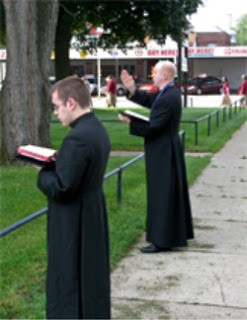 “According to tradition, typical demonic responses during exorcism include foul language, references to sexual perversion, deceit, and profuse blasphemy. Similarly, prayers for exorcism outside the Northern Illinois Women’s Center abortuary in Rockford have provoked just such a reaction from pro-abortion workers and activists within.”
Read the rest here.
This is fascinating stuff. I’ve never ignored the demonic influence that surrounds the abortion industry, but perhaps I’ve underestimated it. Regardless, what I found the most interesting about this story is that I immediately began to feel pity for the workers inside the clinic. I mean, I want to hug each and every single one of those priests and bake them all batches and batches of chocolate chip cookies and sing “We are the Champions” with them, but I feel that way about pretty much every priest everywhere. That’s not an unusual reaction for me.
What is unusual is the overwhelming sympathy and concern I felt for those workers. I wondered what life must be like for them, whether they feel fear when they go home, whether, in the dark hours of the night, they are aware that their souls are in the grip of malevolent evil, whether they feel guilty, ashamed, or depressed. Or whether our culture has done such an effective job of cauterizing their consciences that they feel nothing. Nothing but contempt, nothing but disdain, nothing but hatred for the priests who are out there on the front lines, facing the enemy with unheralded courage, for the sake of the unborn but also for the sake of those employees.
I read Abby Johnson’s book not too long ago, and I was not surprised to find out that she entered the abortion industry out of love. Love for women who needed help. That is the crux of the argument, it seems to me. The reason it elicits such passion, such ire, and such vehemence and even violence on both sides. We pro-lifers stand up for life…all life…the life of the child, the life of the mother, the life of the father. The pro-abortion crowd stands  up for the woman’s life, and her life alone. They stand up for the absolute most essential human right defended in our culture today…freedom. Freedom, ironically, at the expense of the life of another.
Freedom today means the luxury to be self-indulgent. The luxury of avoiding consequences. The luxury of doing what one wishes, when one wishes, for whatever motive one has. The irony of all of this is that this self-directed freedom keeps people in chains. Like Socrates’ theory of the soul being encumbered by the body, the person who is so consumed with their own well-being will never be free to grow, to learn, to overcome. They will always and forever be locked in the restraints of their own selfishness.
It’s a bleak life, living only for yourself. I’ve lived it. Superficially, it’s a better life. I’m not going to regale you with tales of how much better in every way my life is now than it was then; I’m going to be honest. It was nice, going to Target whenever I wanted to, without worrying whether the kids had had naps, been fed, whether they would last through the trip. It was nice to hop out of the car and not spend fifteen minutes unstrapping little wriggling bodies and shuttling them into a cart. It was nice, being able to read a book uninterrupted. Being able to trek across campus at 3 am to the library, being able to uninterruptedly consider the philosophical implications of my existence, being able to go to a party when the Cartesian posturing became unbearable and do a keg stand. It was nice to  sleep when I wanted, or not sleep when I wanted. It was nice to be a size 4, to wear short skirts and feel appreciative glances. I’m a woman, after all, and for several years my highest god was myself. When others worshipped at the altar of me, I was gratified.
What wasn’t nice was the creeping despair that I could never seem to shake. What wasn’t nice was the fact that all those things above were things I didn’t do all that often. After a while I didn’t do them at all. I locked myself in my apartment, obsessed with the driving need to escape myself…myself and all the emptiness therein.


I wasn’t evil in the traditional sense. Well, I guess that some of you might call a girl who wore a postcard-sized skirt around a college campus populated by very devout young men evil. You might be right. But what I mean is, I didn’t kill babies. Even in my darkest hour, that was not a line I would cross.

So while I can empathize with those workers, I can only empathize from a distance. My self-loathing, my false god, my evil was always turned inward, always directed at myself. I’m not under any illusions here; I know that there were many people that got hurt by my actions during those days, and I know that the blame for their hurt is squarely on my shoulders. But…and please understand that I don’t offer this as an excuse…I was never malicious. I never intended to hurt anyone but myself. And I never even consciously set about to hurt myself. Not really.


But the employees in that abortion mill have blood on their hands. Real, tangible, flowing blood. The blood of a thousand babies, a thousand unlived lives, a thousand thousand hearts that would have been touched, altered, forever changed by the lives that were ended so abruptly under that roof.

How do they sleep at night? How do they bear it? I could hardly bear the pain of my own ruined soul. How can they bear the pain of so many? Do they even feel it? I think they must, or they wouldn’t lash out at the priests this way. If they truly believed in what they were doing, if their consciences were completely clear, what would a couple of crackpot religious guys in dresses mean to them? Why would they care? Why would they be so hell-bent on hurting them?


I’ve added all employees of abortion clinics to my prayers today, and I think they will remain in them for many days to come. In so many ways, they are the unwitting pawns of a malevolent, vicious war swirling around us. It’s an invisible war, one in which the gruesome and unimaginable body count is hidden away in medical waste bags. One in which the scars of all those deaths come flashing to the surface of our culture in strange and surprising ways. They are the Hitler’s Youth of our generation, the brainwashed children, swept up in a sophisticated web of deceit and lies and altered language. Words like “fetus” and “termination of pregnancy” obscure the truth, just as surely as “work camps” obscured the torture and killing and senseless savagery that happened not so long ago.

I pray that they do lay awake at night.  I pray that their consciences are troubled, that they sense the malicious forces that are playing war with them, that they begin to realize that something is hideously wrong. I pray, for the sake of their souls and the sake of the souls that pass through their doors, that they wake up. That the prayers of the exorcists work. That the demons are cast out, and the employees are free once again.

July 29, 2011 Such a Melting, a Madrigal Start!
Recent Comments
0 | Leave a Comment
"So what you're really saying is that you use NFP because you don't want to ..."
Naters The Super Suckage of NFP
"I'm sorry, but planning pregnancy involves using birth control. did you miss that memo?"
leesa maire All Parenthood is #UnplannedParenthood
"Without knowing that God has a purpose for everything, my sufferings in life would be ..."
Jim J. McCrea Sentimental Claptrap, Part V: God Has ..."
"Has the photo been changed? Because what's at the top right now is photo of ..."
Evelyn Sex Breasts and Babies
Browse Our Archives
Related posts from Barefoot and Pregnant