I find myself distracted, unfocused and suffering from a headache today. I’m making no headway on my as-yet-non-post for Ignitum Today, so I’m just going with the distraction in the hopes that it will inspire some sort of creative something.

Welcome to my brain, unedited. 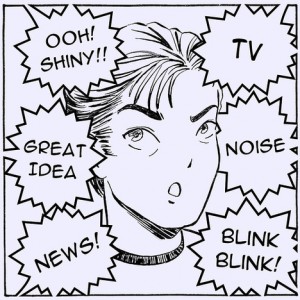 Yesterday I made homemade pop-tarts. I was very disappointed because they didn’t have icing, and as it turns out, what I like most about store-bought pop-tarts is the overly sweet shellacked-cardboard-ey goodness.

The Ogre loved them. The children agreed with me. We win.

Charlotte is currently laying on the floor by my chair, kicking it repeatedly because I won’t give her more sugar. I shouldn’t have given her any in the first place, obviously.

I really want to make Oreos right now, but I spent my whole dedicated baking day making those damn useless pop-tarts. I feel like someone owes me a refund, but I’m pretty sure that’s not how cooking blogs work.

It should be. I still haven’t forgiven the Pioneer Woman for her atrocious Chicken Parmesan.

I’ve paid every single bill on time this month. I know that’s not an achievement for normal, well-adjusted humans, but I have just recently become the one in charge of bill-paying in our house, and mostly I’ve forgotten to do it. This month, not so much. Putting a giant calendar on the wall of our living/schoolroom with the bills and amounts marked on their due dates was very helpful. Refusing to let my inner slacker wait until later was even more helpful.

My inner slacker is currently rejoicing at this brief reprieve from Actual Writing and Actual Housework.

Last night the Ogre and I went to a poetry reading. He offered his students extra credit if they would read a poem. A ton of them showed up. I love these kids. Seriously, they’re very funny and endearing. One of them read Dr. Seuss. There was more than one Wilbur. One kid read a poem by Langston Hughes about the blues, and actually sang the lines that the man in the poem was supposed to be singing. It was the boldest thing I’ve ever seen, and it was a good thing the kid could carry a tune, otherwise it probably just would have been embarrassing. As it was, it was awesome. One girl recited The Jabberwocky. Then one kid read Tupac, and I found myself thinking about how seriously odd Jen Fulwiler is.

I say that with lots of love. I’m odd too, and in a way less cool way. I could probably get through labor by watching Doctor Who, which is much geekier than listening to Tupac. Also, who would I offer my suffering up for if I checked into the Whoniverse? Donna? The Ood? Poor, wretched Old Amy? They’re all good options, but I have a sneaking suspicion that offering up one’s suffering for television characters isn’t actually the point.

Charlotte got her ballet recital costume today. It cost more than a whole month of lessons. I plan on hermetically sealing it post-recital and saving it for future Halloween costumes, in the hopes that by the time my granddaughters have outgrown it, it will have paid for itself.

Charlotte also lost her ballet slippers this morning. We had to order more. This would have been a greater tragedy if her slippers weren’t already so small that it took two adults to get them on her feet.

There’s a baby alligator outside the window, and I’m looking at it right now. Take that, city dwellers! Why would you want the convenience of being able to, say, walk to Trader Joe’s, when you could move here and live amongst frighteningly large reptiles?

I’m drinking tea and eating Smarties. It’s a disgusting combination, I realize that objectively, just like I realized it was vile to put Tabasco on a Milky Way when I was pregnant with Sienna. But pregnancy does weird things to me.

I really dislike chocolate this pregnancy, which is just not normal for me.

Charlotte is now asleep on the carpet. I’m so glad she stopped kicking my chair.

Yesterday morning it was cold outside. Literally cold. I had to put on a sweater, and almost started crying. As it turns out, I don’t miss cold weather when I forget what it feels like. Four solid months of 70 to 80 degree days have actually wiped my memory of the joy that is crisp mornings and cool air. But I remember now.

I hate you, Florida.

Actually that’s not true. Florida is a surprisingly pretty and non-miserable place to live. (Note that I’m saying this before experiencing the reportedly hellish summers.) It would be really perfect if it would just migrate away from the equator a little and get cold in the winter. Or maybe the coming ice age brought on by global warming will help it out a little? We can always hope.

We have a lizard living on our lanai. A lanai is a covered porch/patio. Apparently you have to call it a lanai in Florida. Anyway, the children spend at least an hour every day trying to catch the lizard. He always gets away but can’t ever get off the lanai because the Ogre had to wire the door shut to prevent Liam from killing himself via alligator. I kind of feel sorry for him. The lizard, that is. Not Liam.

I told myself I would write randomly until some external circumstance forced me to get out of this chair and, well, I’m out of Smarties. See you tomorrow.

April 28, 2012 7 Quick Takes Saturday
Recent Comments
0 | Leave a Comment
"So what you're really saying is that you use NFP because you don't want to ..."
Naters The Super Suckage of NFP
"I'm sorry, but planning pregnancy involves using birth control. did you miss that memo?"
leesa maire All Parenthood is #UnplannedParenthood
"Without knowing that God has a purpose for everything, my sufferings in life would be ..."
Jim J. McCrea Sentimental Claptrap, Part V: God Has ..."
"Has the photo been changed? Because what's at the top right now is photo of ..."
Evelyn Sex Breasts and Babies
Browse Our Archives
Related posts from Barefoot and Pregnant