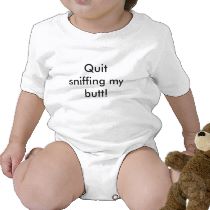 If you’re a parent, you know what I’m talking about. That moment when you think you catch a whiff of something but you aren’t really sure, and you’re faced with one of two options: either unbutton layers of baby clothing in order to peer gingerly into the recesses of the diaper, hoping against hope that you don’t accidentally stick your finger in poop in the process, or pick the kid up and bury your nose in Junior’s bum for a good, long whiff.

Lots of people have voiced their opinions to me that public butt-sniffing is inappropriate and gross. Personally, I think the risk of poop on fingers is much grosser, and I’ll take the butt-sniffing over unsnapping and re-snapping the wriggling angel any day. I’m not phased by butt-sniffing. It doesn’t bother me when other parents do it, and it seems like an undignified but necessary part of parenting, particularly if you’re not one for risking feces-fingers.

But my friend Andrea pointed out yesterday that the real loser in the whole situation is the baby. She said, “how humiliating must it be to have people scooping you up and randomly burying their noses in your butt all day?”

I see her point, and I have to admit that my kids usually squeal in protest when I sniff their bums. However, I think their protest is less a protest over my demeaning their human dignity and more indignation at being forced to hold still for .7 seconds.

I maintain that the real loser in the situation is the parent. After all, no matter what your reasons for doing it, at the end of the day you’re still the one who just stuck your nose in someone else’s butt. It may be your kid, and you may be trying to avoid the even more humiliating experience of finding yourself in public with baby poop on your hand, but it’s still going to be hard for non-parents (and even some parents) to look at you the same way after you’ve just sniffed butt.

I guess there are some parents out there who find themselves disturbed and even a little upset when they lift their faces from their children’s backsides and find their friends and family staring at them with varying expressions of dismay and disgust. Personally, though, I find that butt-sniffing offers a plethora of rewards in social situations that far outweigh the risks of offending others. There are so many things you can find out by sniffing a baby’s butt in a circle of friends. You can immediately tell which parents in the room are socially conscientious and which aren’t. The laid-back parents will take it in stride and maybe even grab a kid of their own for a sniff, just for good measure. The socially conscientious parents will either quickly avert their eyes or look at you with open reproach and move to a different part of the room. I use these reactions as a roadmap for choosing friends. I mean, if they’re upset when I sniff a baby’s bottom, they’re really gonna lose it when my child teaches theirs colorful swear words or refers to God as “her“…again. I find that avoiding friendships with people who are conscious of social propriety is mutually beneficial. I always feel awkward and embarrassed around them, and they usually spend the following week trying to undo the damage my children did to theirs during that brief and painful play-date, and the next several months avoiding eye contact with me in public. The butt-sniff test is a foolproof way to avoid all that discomfort.

Also, nothing diffuses tension like someone brazenly sniffing baby bum. Anytime I manage to unfortunately entangle myself in a conversation about politics or, God forbid, social morality, I always look around frantically for a baby to sniff. It works like a charm. Other people have a complete inability to take your views seriously after seeing you bury your face in your baby’s butt. Usually they can’t even get over the sight to pick the conversational thread back up again. And those tenacious souls who can, those blessed people who just keep right on telling you why you’re wrong while you’re smell-checking a toddler’s diaper, those people will almost certainly fold in the face of an impromptu diaper-change. Even if there isn’t a need for one, I just go ahead and pull out the diapers and wipes and watch them skitter away uncomfortably like the cashiers at Whole Foods when I bring all my kids along for the ride.

One time the Ogre and I went to a wine-tasting party with some acquaintances from our local grocery store. (We made more friends in Vegas at Trader Joe’s than anywhere else…psycho-analyze that,if you dare.) After a few glasses of wine we found ourselves outside on the patio talking to a Wiccan couple. It was all going fine until they happened to bring up how happy they were that Obama was elected, as it was an important step for racial relations in our country, and the Ogre replied, “Well, I’m a war-mongering conservative.” I literally looked around frantically for a baby butt, but unfortunately that evening was the second time in three years that we had hired a babysitter. No children were available. The conversation deteriorated from there, and even my astute observations about the pentagrams they were wearing (gleaned from Supernatural, of course) couldn’t save the evening. I’m pretty sure I made things worse, actually. I tried again by over-enthusiastically joining them for karaoke, but my off-key Janis Joplin seemed to clear the room rather than cheer it.  By the end of the evening the entire party had heard about my husband’s political incorrectness and ushered us out the door with  many a disapproving glare.

I remain convinced that had a baby been present, the party would have been saved. There’s just no better way to diffuse tension. Baby butt-sniffing may in fact be inappropriate and gross. It may even be undignified for both baby and parents. But by God,  it’s useful. And I, for one, will never trade that usefulness in for any amount of social propriety. Besides, all my remaining human dignity pretty much went out the window the first time I found myself naked from the waist-down in a roomful of strangers with my feet up in stirrups.

July 13, 2012
Stepping Up and Knowing When to Step Down
Next Post

July 25, 2012 I'm Back!
Recent Comments
0 | Leave a Comment
"So what you're really saying is that you use NFP because you don't want to ..."
Naters The Super Suckage of NFP
"I'm sorry, but planning pregnancy involves using birth control. did you miss that memo?"
leesa maire All Parenthood is #UnplannedParenthood
"Without knowing that God has a purpose for everything, my sufferings in life would be ..."
Jim J. McCrea Sentimental Claptrap, Part V: God Has ..."
"Has the photo been changed? Because what's at the top right now is photo of ..."
Evelyn Sex Breasts and Babies
Browse Our Archives
Follow Us!

St. Maximos, The Purpose of Humanity and Universal...
In his works, St. Maximos the Confessor indicated God’s desire for humanity:...
view all Catholic blogs
What Are Your Thoughts?leave a comment
Copyright 2008-2017, Patheos. All rights reserved.