A Little Bit of Hope, A Lot of Musing

A Little Bit of Hope, A Lot of Musing December 3, 2012 Calah Alexander 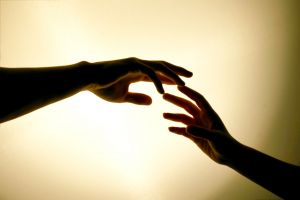 I have received 130 comments on my Fear, Prayer post, dozens of personal emails, and several facebook messages. I’m honestly overwhelmed by the response that post generated. With very few exceptions, the comments and emails were deeply compassionate. Even those who urged me to reconsider birth control were written with such obvious love and sympathy that I wanted to hug each commenter.

I know this is going to sound cheesy, but this is one of those times when the blogsophere has reminded me of the beauty of humanity. We can be deeply divided on personal, political, religious and social issues and still recognize someone else’s suffering and reach out to help. I know some of my commenters were upset that I received so many “ditch the rules” comments, but I wasn’t. I was grateful and humbled that so many people I’ve never met cared enough about my struggles to try and help, in whatever way they could.There have been many times in the past few years when I have looked at comment boxes and despaired of man’s ability to love his fellow man, but this one time, I looked at the comment box and saw overwhelming love. I said at the bottom of my post that I would pray without hoping, and I meant that I wouldn’t hope for a respite for myself, a reprieve from my own struggles. But, in fact, all of your comments left me with a hope that I haven’t felt in a long time. A hope for humanity, for all of use, that we can put aside ideological differences and choose to love each other. So thank you.

I know a lot of people were wondering, in the comment box, why I follow the Church’s rules on birth control. I think the phrasing I just used, “the Church’s rules”, or the phrase I used in my post, “the Church’s ban”, are part of the problem. I’m a convert, not a cradle Catholic. I haven’t had the rules of Catholicism pounded into my head since I was a child. In fact, I grew up Evangelical, among people who had no problem at all with birth control. I chose the Catholic faith freely, knowing what would be required of me. I went in with  my eyes wide open. I did not understand just how difficult a life of Catholicism would be, as evidenced by my struggles to live it, but I had a rough idea of what would be required of me.

In my quest to understand Catholicism, before I took on the faith, I did a lot of research about the birth control issue. I knew it would be a huge issue for me, perhaps even the huge issue, because I’m not a child-centric person. I’ve never been the girl who wanted nothing more than to be a mother. In fact, I didn’t really even like children until I had my own. Even then, it took some time. I still don’t do well with newborns. I find that stage awkward, difficult and exhausting. Give me a toddler and I’ll be set, but a newborn? No thanks. So I set about trying to understand just why the Church had this ridiculous rule.

I wrote about it extensively here, in one of my first posts. Basically what I found out is that the Church doesn’t make rules. There’s no, “do this or you go to Hell” or “don’t do this or you go to Hell”. That’s the wrong way to understand the faith. Rather, the Church, after much study and reflection, says, “these things are morally wrong, and to do them would be to commit a sin against God.” The Catechism is less a rule book and more a road map, marking areas for us that are dangerous. I understand 100% the arguments against hormonal birth control. They are abortifacient drugs, not to mention Class 1 carcinogens. They are physically dangerous drugs to ingest, both for the mother and for potential children. They also don’t work very well (evidence, Sienna). The arguments against barrier methods and sterilization, however, I’m less empirically convinced by. The idea is that sex is supposed to be both unitive and pro-creative, an anything that falsely separates sex from it’s natural life-given potential damages the integrity of the act. I sort of understand this, but I sort of don’t. After all, during pregnancy, a couple can’t have pro-creative sex. Nor can a couple have pro-creative sex when a woman is infertile. I understand, intellectually, that abstaining during fertile periods is completely different than altering the sexual act to render it infertile. Still, though, it seems like a lot of hair-splitting and philosophizing. Basically, the argument makes sense philosophically but doesn’t hold much water for me when it comes up against the practical reality of babies, and lots of them. That’s where faith comes in. I believe, to the core of my being, that the Catholic Church has both wisdom and truth. I believe that the “rules” in the Catechism are not there to ruin my life or to make me a slave to children, but to allow me to be the freest, most complete person I can be by keeping me separate from sin. I try not to see myself as “oppressed by the rules”, even though I fail regularly. I try to remember that I chose this path because I saw truth, beauty and love here.

That being said, I’m convinced that the Church does not want me to have a nervous breakdown, to lose my marriage, or to lose my faith. There simply must be a way to track fertility that allows us to determine fertile periods and abstain during them. I’m going to try the Marquette protocol for breastfeeding, and then hopefully after my fertility returns I can figure out a method that combines the different aspects of Creighton, Sympto-Thermal and Marquette that allows us to accurately monitor fertility. I am feeling cautiously optimistic about having the monitor to rely on. I’m also trying to stop myself from issuing threatening prayers at God, like, “This better work, God, or so help me, I will have the doctor tie my tubes the second the next baby is born! I mean it this time!” I’m pretty sure that’s not how praying is supposed to work, although at this point, I’m willing to bet God understands.

But I do think that there is a real problem with the Church’s teaching on the morality of birth control. It’s the same problem that many pro-choicers point out (inaccurately, I believe) when citing the Church’s hypocrisy on abortion; namely, lack of follow-through support. The Church says, “don’t use birth control, have big families” and then when we do, and when we find ourselves drowning because of it, there’s no help. No support. I was angry and upset at Gretchen’s story in my comment box, about how she was bedridden with twin newborns and two small children, a husband who couldn’t take off work, and her local parish said, “sorry, we can’t help”. That is wrong. It’s so bloody awful and heartless that it makes me want to scream. The Anchoress wrote a post about how the Church needs a ministry to young mothers. I wholeheartedly agree. I’d go a step further and say that every parish needs a ministry that provides not only psychological help and comfort, but also physical aid. There are women who are completely isolated with several children, who have no family to help after childbirth, no friends to make meals, and whose husbands can’t take time off to help. These women should not be left to fend for themselves. They often do not have the time or resources to build a network of support for themselves. The Church needs to step up and help. The days of big, extended families all living on the same block are gone. It’s more difficult than ever for a family to try and live in accordance with the Church’s teaching, and there ought to be recognition of that difficulty, and help given to those who are struggling. The more I think about it, the angrier I get at this complete dearth of support and succor for families struggling desperately to do the right thing. I don’t know how such a ministry might be started, but I think that parish pastors have an obligation to try and find some way to help the young mothers of the parish.

Anyone else have any ideas about how to get a ministry for young mothers up and running? And what are your thoughts on the arguments against birth control that I’ve outlined here?

December 4, 2012 Worth It
Recent Comments
0 | Leave a Comment
Browse Our Archives
get the latest from
Barefoot and Pregnant
Sign up for our newsletter
POPULAR AT PATHEOS Catholic
1