How Not to Respond

The news out of Connecticut yesterday was terrible.

And even that sentence seems trite, cliched, nothing even close to capturing what happened and how I feel and my God, how wretched it is to think of those poor little kids, about the same age as my Sienna, dying in fear and confusion and far from their parents. And their parents…honestly, my mind keeps blocking me there, as if it won’t let me travel down that path of what they must be thinking and feeling, wandering around their houses, picking up a discarded sock from their dead child, a shoe, a toy, a stuffed animal, a shirt…anything tangible to hold onto now that they can’t hold their children. And maybe for a second they manage to get ahold of themselves, take a deep breath, and then they turn around and see a present under the tree, picked out carefully and wrapped early, that precious little hands will never unwrap. God. God. Honestly, what can I say but that? God. Where were you, where are you, and why, why, why?

I don’t know the answer. I never will. There are lots of sections in the catechism that talk about the question of evil, books written on it, even blog posts about it, but all those are cold comfort next to kindergarteners, shot dead in their classrooms. On the tragedy itself, I have nothing to say. My thoughts and fervent prayers go out to the victims and their families.

On the response to the tragedy by people who call themselves Catholic, I have a whole hell of a lot to say. I’m so angry about certain things that keep popping up on facebook that I want to scream. But I’m trying to keep in mind that we’re all doing this, a whole country of people enraged by the killing of children and lashing out at who’s nearest because we can’t last out at the nameless, shapeless evil that motivates these hideous acts. People furious about gun control or the lack thereof, about those who don’t homeschool or those who say it would have saved these kids, about access to mental health services and oversight for afflicted individuals…it goes on and on. There’s no one left to punish for the crime, so we pummel each other in frustration. I get it.

Yet still, there are some responses to this tragedy that are truly wrong. Not just misguided, but wrong. I came across one on facebook last night and have been stewing about it ever since. I deliberated for a while about writing this post before deciding that it needs to be said. There are good people on facebook who will share these links, like these links, and pass them on, not because they’re malicious but because they’re not thinking. At a time like this, you need to think about what is being said and all the implications it bears. 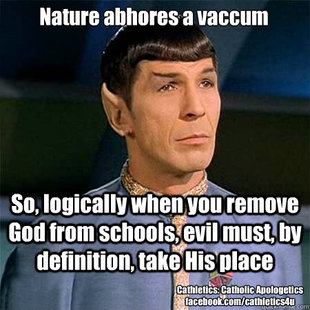 This is the meme that showed up in my newsfeed. I shared it to point out how awful it was, and the Anchoress responded with, “This is why people hate Christians and misunderstand Christ.”

I could not agree more. This sentiment is being expressed in a million different ways all over the internet and airwaves today, and every person saying it, liking it, and sharing it needs to stop. Right now. It is one of the most reprehensible things I have ever seen Christians do.

Leaving aside the outrageous fact that someone made a Star Trek facebook meme about the slaughter of kindergarteners, it’s reprehensible because this is smugness in the face of the death of children. It’s saying, “this is exactly what you get when you take God out of schools.” I wouldn’t be surprised if someone added, “haha, you deserve it, atheists”, because that is exactly what is meant by this meme.

I can’t believe I have to say this, but this is not how Christians should behave. Reveling in the death of children because it proves that you were right all along about a law to ban prayer in schools? No wonder people hate us. If this is our attitude, they should.

This isn’t how God works. People make laws about religion all the time. You can pray here, you can’t pray here, you can only pray to this God or that one, you can only pray at this time or that…it goes on and on. No laws can stop God from being present with us. No laws can stop God from anything. God was there, in that school, with those beautiful little children. I don’t know why he didn’t stop it. There’s a lot about free will and evil I will never understand. But God wasn’t sitting outside the school like some spurned teenager, sullenly saying, “I could have stopped this if you hadn’t kicked me out.” Are you kidding? That’s not God, who made us, and then loved us so much that he let his only son die for our salvation. That’s not Christ, who allowed himself to be beaten, humiliated, tortured and slaughtered by us, for us. That is not Christianity. That is not what we believe. So stop sharing it, and stop saying it.

For the innocents slaughtered in Connecticut yesterday, eternal rest grant unto them, O Lord, and let perpetual light shine upon them.

A Series of Small Mercies
It's the small mercies that make all the difference. January ended...
view all Catholic blogs
What Are Your Thoughts?leave a comment