Pope Francis, Teaching Me to Walk the Walk-Updated with some Link Love

Pope Francis, Teaching Me to Walk the Walk-Updated with some Link Love March 14, 2013 Calah Alexander

A few days ago, I expressed my affection for Cardinal O’Malley on facebook. The Anchoress replied that I loved him so much because there was something “very Franciscan” about me. I didn’t really understand what she meant, because I’ve had a completely unreasonable bias against St. Francis for years now, since he always seemed to me to be the first ever PETA member and I can’t get behind not eating delicious animals.

And now our Pope is Francis. And yesterday afternoon and evening my newsfeed was peppered with all the reasons why he’s like Francis. To my surprise, none of them mentioned animals. All of them, however, were focused on the way in which this Pope has walked the walk.

He takes public transit. He lives in a small apartment. He cooks his own meals. When he was named Cardinal, he ordered the parishioners in Argentina who were gathering funds to come celebrate with him in Rome to stop and distribute the money they had raised to the poor. After he was elected, all the cardinals stood around at the hotel waiting for the papal car, when the last bus pulled in and out climbed Our Holy Father. You can just imagine him, can’t you, saying awkwardly to the drive, “Um, you know, that’s okay, I’ll just go with the guys on the bus. There’s no need to waste the gas money.” 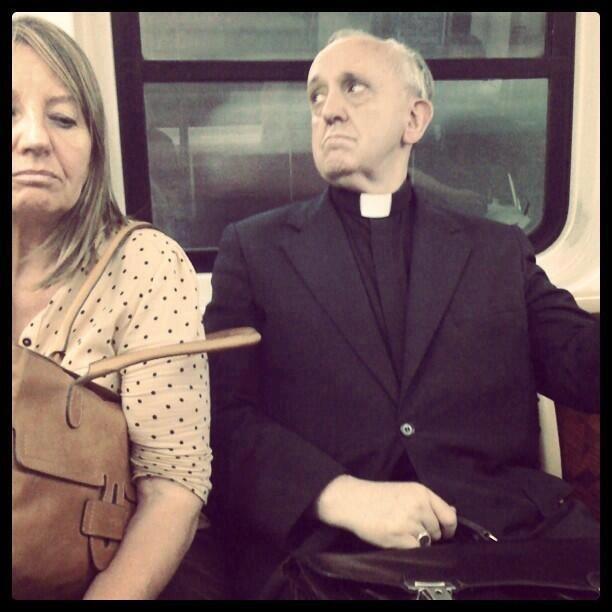 If this is what it means to be Franciscan, then yeah, I’m totally on board. These are the things that speak to me. Oh, there are a million other things I’ve already read from Pope Francis that I am chomping at the bit to write about in a frenzy of delight and gratitude, but this is what I was hoping for in a pope. Someone who would say, “these are the things Christ has called us to do, so let me show you how.”

A while ago I put up a Paypal donate button on my sidebar. It’s kind of in an inconspicuous place because I felt a little awkward about it, and it’s only been used once. But at the time we were having trouble making ends meet and I thought, well, every little bit helps.

Technically, our little family is right below the poverty level set by the government. This means that I have to work really hard to plan meals so that I can make healthy choices and still afford organic, pastured meat and diary. It also means we hardly ever eat out, we never go to movies, we don’t buy clothes unless someone gives us Christmas or birthday money, etc., etc. But guess what? That is not poverty.

Just up the road a little ways there is a town called Immokalee. We drive through it occasionally. This town is full of migrant workers, generally field hands who help with the fruit harvest that happens year-round in Florida. The cancer rate is sky-high because of the amount of pesticides the workers inhale. 98% of the violence in our county happens in this town, and it’s almost all domestic violence. The local parish priest once told our neighbor that they would be delighted to take some mattresses the previous tenants left in our garage, even the one that had holes in it, because the kids getting them had never slept on a mattress before. That’s poverty.

So, inspired by the example of our day-old Pope Francis, I’m going to give 100% of the donations I receive to St. Matthew’s House in Immokalee. If you feel inclined to donate, you can rest assured that these people need it.

I am so grateful for God’s faithfulness and love in giving us this new Holy Father, who has influenced me already to practice what I preach. I have high hopes that he will lead all Christians to lives of increasing holiness and faith. Deo Gratias. Viva il Papa!

Some updates from around the web:

Deacon Greg, “This is a Pope from Galilee”

Frank Weathers, “Christian Badass or Christian Coward, Which Do We Choose?”

Thank God for this post from Larry D, saying everything I wanted to say and more. Here’s an excerpt, but do go read the whole thing:

Our world is lacking in charity and compassion. It’s dying from a dearth of love, and doesn’t even know it. The world is seeking answers to its questions in every conceivable wrong place, and will not – refuses to – accept the Church’s plausible and simple and correct responses to those questions. They’re written off as impractical, or controlling, or outmoded, or bigoted. Thus, the Church is ignored and maligned. So the world continues on its way, stumbling about in the dark, oppressive clouds of doubt, searching. It has believed the lie that evil is good, thus sinking deeper in sin, thinking it’s found the solutions to its problems. Meanwhile, the Church stands still and waits. It’s why the Church doesn’t change – cannot change – her teachings. Because when people are finally ready to accept what She has to offer, they will know where to find Her. Where She has always been. Waiting patiently to accept the sinner in, and then, by one conversion followed by another, work to convert the world.  To bring the Gospel message of hope to a hope-less world.

God knows this. He knows our Church needs healing, too. The vitriol I’ve read in various places is evidence of that. Heck, I need healing. We all do.  All of us know that our Church is wounded  – we’re separated by pride, divided by self-righteousness.  The worst of the Church’s sins have been exposed to the world, and the most painful of attacks have come from within.”

George Weigel on the first American Pope (he also explains that whole “runner-up to Ratzinger” thing, and why that’s really a misconception)

March 16, 2013 When Catholics Play Tug-of-War, the Church Loses
Recent Comments
0 | Leave a Comment
Browse Our Archives
get the latest from
Barefoot and Pregnant
Sign up for our newsletter
POPULAR AT PATHEOS Catholic
1

The Grace of God in Scrambled...
Steel Magnificat
Related posts from Barefoot and Pregnant