Screaming Babies in Mass, and on the Internet 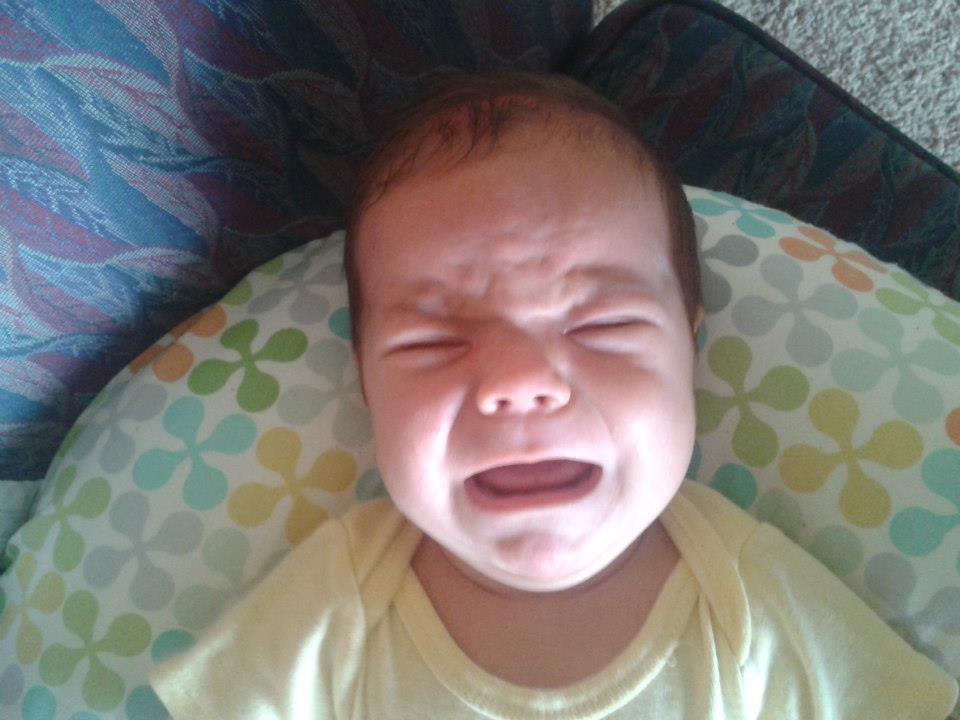 Deacon Greg opened up a can of worms the other day when he posted a letter from a reader asking why parents with screaming children don’t remove their kids from Mass.

The letter-writer has Meniere’s disease, and loud, high-pitched noises are physically detrimental to her. I read her letter with true sympathy, read the comment section with sympathy for most commenters, and then sat down to write this because there were a few comments that literally left me astounded.

In regard to the general debate, I think there’s a conflation of terms that is causing confusion. Most of the commenters tried to address this, and I’ll do my best here as well. “Screaming” is not the same thing as fussing, but there is a tendency for adults who are not parents, or even who are not parents of the child in question, to feel the noise/agitation more intensely, just as there is a tendency for parents who have a screamer (*ahem Lincoln*) to become desensitized to the volume. That being said, for me and my friends, both here in Ave Maria and in Dallas, the norm is to tolerate a baby who starts fussing a bit for a bit. Sometimes they’ll go to sleep, and the distraction of getting out of a pew and getting to the back of the Church only to arrive there with a dead-asleep baby and have to repeat the performance all over again can be worse than a few minutes of fussing. But parents have a radar. When it becomes clear that my kid is not going to settle down, we go to the back of the Church. (Not just the back, but the narthex. In my opinion, changing geographical locations when a baby is being disruptive doesn’t help a whole lot, but a solid set of doors does.)

That actually seems to be the norm at most of the parishes I’ve visited. Usually I don’t encounter a baby who is allowed to actually scream all the way through Mass. Baby noises and mild fussing are in a different category, and I believe they should be tolerated just as we would tolerate an adult with a cough or a habit of sighing or murmuring. However, I have been at the rare Mass where that does happen, or where a toddler is allowed to talk at full volume, run through the pews, throw things, etc. I understand those things do happen, and I don’t think there’s really a defense for allowing a child to run wild in Mass. But the vast majority of the parents I see are trying to teach their children how to behave, and some kids are more difficult than others.

Here are the things about this debate that get me, though. First, this comment at Deacon Greg’s blog:

“When I read these posts from parents of young children who say they need God’s grace and that is why they bring their young children to Mass, I consider that to be selfish. We ALL need to look out for one another. It is NOT “all about me” as so many in this generation believe. I come from a different time, as I said in my previous posts, when folks were much more respectful and wouldn’t think of keeping, or even bringing a young child to Mass. “

This kind of attitude makes me livid. Telling parents that they should stay at home on Sundays until their children are old enough to behave, or that they should “tag-team” Mass so that their children never get to go to Mass with both parents and all their siblings and Sunday becomes a stressful, all-day affair instead of a time for God and then a time for family, is unloving. It’s uncharitable. It’s against Church teaching. And it’s just nasty.

I understand that truly screaming children can be frustrating and even cause pain in others, but I’ve been to enough Masses in enough different parishes in enough different states to know that such a thing is only the norm at certain types of Masses. It’s a simple thing to avoid those. Most parents, however, will not let a child scream all the way through Mass without removing him or her. But this person is saying that bringing a child to Mass is selfish, because children bother other people. Apparently parents of young children who would like God’s grace are being selfish, since their children’s presence spoils the reception of God’s grace for other people.

We should all look out for one another, and that includes parents of young children, people who are sensitive to loud noises, and cranky people who apparently hate children. I think the best way to look out for the latter is to keep bringing the kids to Mass. As long as the Church continues to exist, she will be full of babies, children, elderly, teenagers, cranks, and sinners. Trying to remove the children until some undefined age when they will no longer be bothersome is absolutely against Church teaching, and against the words of Christ himself.

Which brings me to the next jaw-on-the-floor moment. This is an update from the original letter-writer:

“People like to say that because the Church encourages couples to have children that we are obligated to have babies & young children at Mass.  It seems to be that when Jesus said, “Let the little children come to me,” He wasn’t teaching in the synagogue!”

I am so confused by this argument,  which was latched onto and repeated several times in the comment section. Our faith, people, is not about a place, like the synagogue. It’s about a person. Christ. That’s who we go to see on Sundays. Christ literally said, “Let the little children come to me.” He didn’t say, “unless I’m in the synagogue, or in Mass; then, keep them home so they don’t disturb the people who are really trying to focus on Me.” Actually, can you imagine Christ saying that? Saying, “hey, those kids get in the way of other people praying, so keep them home” or “it’s selfish of you to want My graces for yourself when the presence of your children bothers some of your fellow parishioners. Wait till the kids are older until you come see Me again.” If you can, you know a different Christ than the one I know. I think we should take him at his word and let them come to him, in the same place he comes to us: in the Mass.

I can’t help but think that this discussion wouldn’t even come up if we weren’t all extraordinarily selfish, attending Mass for what we “get” out of it, instead of what we give. We’re all behaving like those screaming babies, wanting everything around us to change so that we are happy and comfortable. But as Christian adults, we have no justification for that. We’re asked to lay down our lives for each other, as Christ did. We should give our time, our comfort, our love, ourselves, for the sake of Christ, just as he gave himself. The Mass is completely centered around that sacrifice. How much cognitive dissonance is there in insisting that other people accommodate you so that you can pay closer attention to this reminder that Christ died for us and told us to do the same for each other?

By all means, love your fellow parishioners enough to take the screaming baby out; love your baby enough to address the fact that he or she is truly agitated. But don’t stay home for five years or turn Sundays into a whirlwind of tag-teaming chaos. Let’s all just do what Christ says we should, and love one another as ourselves. For the people who would like babies to be removed so they are not disturbed, remove yourself instead. For the people who would like everyone else to embrace the vitality of life that babies and children bring, don’t return the next scowl with a scowl of your own; take the baby to narthex and pray (without irony or bitterness) that God would bless the scowler with a peaceful Mass. Wouldn’t it be so much simpler if we all actually loved each other, instead of trying to prove each other wrong all the time?

April 26, 2013 So I'll Be Embarrassing Myself on Relevant Radio Tonight...
Recent Comments
0 | Leave a Comment
"So what you're really saying is that you use NFP because you don't want to ..."
Naters The Super Suckage of NFP
"I'm sorry, but planning pregnancy involves using birth control. did you miss that memo?"
leesa maire All Parenthood is #UnplannedParenthood
"Without knowing that God has a purpose for everything, my sufferings in life would be ..."
Jim J. McCrea Sentimental Claptrap, Part V: God Has ..."
"Has the photo been changed? Because what's at the top right now is photo of ..."
Evelyn Sex Breasts and Babies
Browse Our Archives
Related posts from Barefoot and Pregnant