Well my Easter was…hmmm. I was going to tell you about it words, but I decided to do it in GiFs instead cause GIFs make everything better.

We had a student over. We like having students over for holidays cause a lot of them don’t go home, but it’s always kinda nerve-wracking for me because…well, cause I’m me. Also we have ill-behaved children and an even more ill-behaved dog. Also because it’s been a rough couple of months and I wasn’t sure I was up to hosting anyone for dinner, but the Ogre really likes this student and I hated the thought of him eating Easter dinner at the cafeteria. Anyway, he’s awesome and I knew right away that this would be a particularly enjoyable Easter full of good conversation, good food, and good wine. I was like

until Folly started licking his face off. But before I could even get angsty about it he laughed and assured me that he grew up around dogs and his dogs also jumped up on people and basically did whatever they wanted. Then I was all

until I overcooked the lamb. For the fourth year in a row. Oddly it didn’t phase me that much, though. I was just kinda like

Dinner was still good, and Folly wasn’t horrible and didn’t jump on the table even one time. I even started thinking about loving her again.

Until after dinner, when we were sitting around talking outside. I had her on the leash and she was just sitting there, all floppy eared like 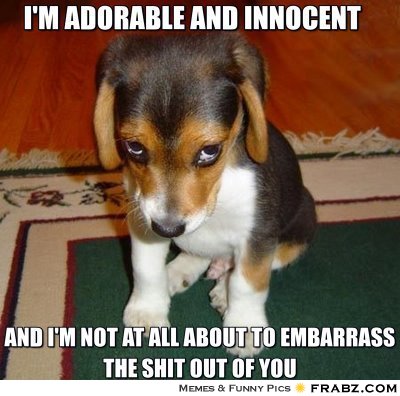 then, out of nowhere, she just took off. Unfortunately, my grip on her leash was a bit too firm, cause she literally pulled me out of my chair and into the air, where I flipped over and landed face down on our neighbor’s driveway.

If it sounds like something out of a cartoon, that’s cause it was. Also much like a cartoon, I didn’t drop my wine glass. I simply smashed it against the concrete when I stuck the face-down landing like

Needless to say, I was totally humiliated. I was all

but I couldn’t, so I did the next best thing

Here’s an important lesson, kids: drinking more wine to cover your embarrassment is almost certainly going to be a self-defeating strategy, as it’s very likely that you’ll overcompensate and become incoherent and stupid, thus multiplying your embarrassment exponentially.

When I woke up this morning, staying in bed forever seemed like a viable plan. The Ogre kept trying to get me to get out of bed but I just kept wrapping my face in more layers of sheets like

I’ll be 30 in two weeks, which means I’m way too old for these kinds of shenanigans. Learning one’s tolerance for wine is a thing you do in college. It’s okay to be stupid then, cause you are stupid then. It’s not really okay when you’re almost 30 and have four kids. So now I’ve made a post-Lent sacrifice: no drinking except for special occasions, and even then, three glasses of wine is my absolute limit.

Sadly, being mature in retrospect doesn’t change the fact that at some point in the future I will almost certainly have to leave my house again.

I wonder if it will help if I take this sign with me:

Fasting Friday: Thinking about Hell
Catholic and Enjoying It!
Related posts from Barefoot and Pregnant