Theology of the Booty

On Facebook, Jennifer Fulwiler is asking for 10-word descriptions of worst Mass experiences ever. After my offering, I dug up this old post that inspired it, cut out the boring “moral lesson” at the end, and re-published it for you with a snazzy new title. Please enjoy this account of personal mortification, then go read the comments on Jen’s post. They are hilarious. My current fave is this one: “Toddler smacks passing butts in communion line. Toddler hides. I look like perv.”

I was really thinking that Mass would be a pleasant experience today. It’s a daily Mass, after all, in an auditorium full of 1st-to-12th graders, so it couldn’t possibly be longer than a half hour, right? Plus, the auditorium is guaranteed to be air conditioned to a greater degree than the sweltering Oratory where we usually spend sticky, frustrating Sunday mornings, right? Plus it’s earlier than the Sunday morning mass, so the little kids would be in that “sweet spot” time zone right after they’d let out their post-breakfast energy but before they went into their pre-lunch meltdowns, right?

The parents sat along the sides of the auditorium, facing the rows of seats in the middle that held the students. It was really sweet to see Sienna’s face light up when she walked by with her class and spotted us and Charlotte and Liam immediately began screaming “Sienna! Nenna! Sienna! Nenna!” But things went downhill from there, and fast. Sienna’s class headed for the absolute opposite side of the auditorium, sending Liam into hysterics, while the rows directly in front of us filled up with high schoolers. I made the mistake of letting Liam carry one of his matchbox “security blanket” cars into Mass, thinking that it would be short, it was informal, and as long as he just held it like he usually does, it wouldn’t be distracting. 2.5 minutes into Mass, Liam began trying to run his car noisily along the side of the bleachers behind us, making enthusiastic “vroom! vroom!” noises. I took the car. He squealed in indignation. I whispered that he had to be quiet, and handed his car back. He promptly threw it at the woman seated next to us, who mercifully did not notice, but the car went into my purse after that. Then Liam went totally limp in protest, slid off his chair and onto the floor, and just as everyone grew quiet for the reading of the Gospel, he began to make loud, angry growling noises.

Like any patient, gentle mother, I began to issue copious threats in a steady hiss while attempting to reach around my enormous belly and yank him back into his chair. I was a little overly enthusiastic with the yanking, and he protested the near loss of his arm with a loud yelp. Then he smacked me in the face (which he got verbally reprimanded for, but honestly I couldn’t blame the kid). After that I sat him firmly in my lap, alternately begging and threatening him in a whisper to be quiet while he kept up a steady whining at a low-level frequency.

By this time the homily had been going on for longer than the 5 minutes that I think is the appropriate length for a daily Mass. I was starting to realize that the combination of my girth, Lincoln kicking the crap out of me from the inside, Liam flailing in my lap, and the hideous meteorological behavior of the state of Florida was going to make me sweat my behind off no matter how high the air was cranked. I could feel sweat dripping down my back and I swear to you that I could actually feel my carefully curled hair begin to poof and frizz. I risked letting one hand off Liam to wipe the sweat off my face, and heard Charlotte whisper, “ew, Mommy, why are you all wet?”

I looked over at my middle child, who had been so quiet that I’d almost forgotten about her, and saw her standing in the middle of the aisle, picking her nose and eating her boogers. Judging from the half-disgusted, half-amused expressions on the faces of the high schoolers across from us, her nasal spelunking had been going on for some time. I actually had to choose between telling her to stop and keeping my lips firmly closed against my third-trimester gag reflex as she happily chowed down on a particularly large booger, but once I got it under control I whisper-yelled “Charlotte Elizabeth! Stop that! That is disGUSting!”

I grabbed her arm, barely noticing when Liam used that opportunity to dive out of my lap and roll onto the floor, and frantically tried to get her to stop banging her head. I finally resorted to hissing, “If you don’t sit still and be quiet until Mass is over, I won’t let you watch Tangled when we get home.” She immediately stopped freaking out and sat resentfully in her chair, glaring balefully at me out of the corner of her eyes.

Meanwhile, Liam was literally rolling back and forth across the floor at my feet, and by that point I was too exhausted to care. I figured he was at least quiet, and if the people on either side of me didn’t feel sorry for me by now they could go ahead and be offended at my misbehaving offspring. Then I realized that I was so hot that I was probably either going to throw up or pass out. I stared up at the altar and mentally begged the priest to stop talking and begin the consecration. Miraculously, he stopped. Like, mid-sentence. I mean, it might not have actually been mid-sentence since I patently had not been listening, but it seemed like it to me. I breathed an audible sigh of relief as we stood for the prayers of the faithful.

Liam continued with his silent rolling and Charlotte with her baleful glaring until just before the sign of the peace. I was starting to think that the worst was over, and that if I could just remain upright for ten more minutes we’d be home free. Then Liam tried to run away, and I was forced to scoop him up and hold him still again as we all stood. Charlotte, who had been perfectly (if angrily) silent and still, suddenly grabbed the hem of my skirt and lifted it as far over her head as she could, just as everyone began looking around to give each other the sign of the peace.

I was, at that moment, profoundly grateful that I had the foresight to put on boy-short style underwear this morning. I was also profoundly regretting being so behind on laundry that it was my oldest, rattiest pair of boy-short style underwear. With my arms full of Liam, there wasn’t much I could do but frantically order Charlotte to put my skirt down, which she did, with a slightly Bad Seed-ish smile. I looked up, not only dripping sweat but now blushing furiously, only to catch the eyes of every high-schooler at the Academy. They had the grace to look away, but I definitely caught some suppressed grins, because let’s be honest, who wouldn‘t laugh at that?

After that, I thought things couldn’t get any worse. Then, while everyone was kneeling on the floor and I was sitting because I’m huge and not into excessive mortification, Charlotte grabbed my boob.

I have no idea why she did that. I’m going with the theory that she was fascinated by the lace pattern on the top of my dress (because she is, after all, an excessively girly-girl) and not that she’s a tiny weirdo, but I was so shocked that I let out a yelp and naturally, everyone turned to see what was happening. And then Charlotte kept doing it, apparently delighted with the string of threats issuing from my mouth and the increasingly red color my face was turning, until I grabbed both her hands and held her still. Liam took advantage of that moment to hit her in the head, of course, and she wailed, and thank God that it was finally time for us to receive communion at that exact moment, because I scooped the kids up, ran for Jesus, and then hightailed it the hell out of there.

March 18, 2015
Temporal Darkness & Eternal Light, One Year In
Next Post

March 20, 2015iZombie is Veronica Mars, with Cup O'Noodle Brain Soup
Recent Comments
0 | Leave a Comment
Browse Our Archives
get the latest from
Barefoot and Pregnant
Sign up for our newsletter
POPULAR AT PATHEOS Catholic
1 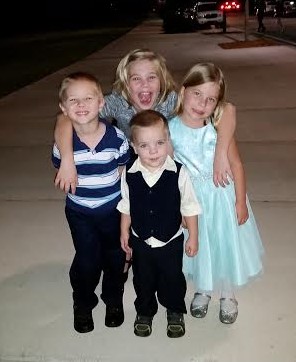