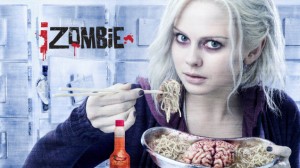 I know, I know — not another zombie show! But iZombie brings the fun to the, er, table.

I love this show so much I’m basically incoherent with glee. It feels indecent to be so happy during Lent, but here I am. The least I can do is spread the happiness to the internet.

Basically, this show is the total opposite of The Walking Dead, a show I also love dearly. Where TWD is about surviving a large-scale zombie apocalypse, this show is about a zombie surviving the small-scale apocalypse of her new, undead life. The coolest — and most unexpected — part of the premise is that unlike True Blood, where some people are zombies or vampires or just gross and the tension hinges upon their integration with humans (that, and sex — lots and lots of icky sex), there’s only one zombie in iZombie — our asskicking protagonist, Liv Moore.

(Sidenote: yes, her name is very punny, but this is what Rob Thomas does and you should let him do it, because it works and his characters are delightful.)

Liv was an overachieving type-A star med student with a perfect face and perfect hair and a perfect fiancee and a perfect, perfect life, before she uncharacteristically attended a party that devolved into a zombie feast. I’m not going to tell you how it happened, because I think that is one of the most interesting parts of the pilot, but I will tell you that the party scene — and the pilot generally — is pleasantly light on gore. Which, let’s be honest, is a relief after last week’s episode of The Walking Dead.

Anyway, Liv gets scratched and zombied, and transforms into an disturbingly pale-faced, white-haired ME with an acerbic wit and an infinitely more interesting life. Mostly because no one knows she’s a zombie — hell, no one except her boss actually knows that there are zombies, since the official party story was that drunk people killed each other and set the boat on fire — but also because she just really wants to eat some brains, now. Hence her job as an ME in the morgue, where she can get her hands on some yummy frontal lobes and eat them over Cup O’Noodles. No, I’m serious, that actually happened. See what I mean about this show being delightful?

The twist is that when she eats the brains, she absorbs the dead person’s memories and some of their personality quirks. The memories inadvertently end up putting her in a position to help a police officer solve murders, but the personality traits are a little hit-or-miss. In the pilot, she could suddenly speak Romanian, but she also turned into a bit of a klepto. Which was weird and confusing, and not my favorite part of the show, but it could work if they tie it into the plot a little more smoothy.

This show is definitely heavy on the VMars flavor. As a long-time, slightly deranged VMars fangirl, I had no problem with this. There were one or two bits of inner monologue voice-over that I almost heard in Kristen Bell’s voice, but I’m sure once the show hits its stride, Liv will develop a character distinct from  our beloved Veronica. Hopefully not too distinct, though. It also had the classic Rob Thomas series set-up, with the big overarching theme (how did this happen, is there a cure, and are there other zombies? spoiler alert: there are) that drives the season, and then the procedural-style episodic plots. It’d be nice if the episodes get more interesting than “Romanian hookers and a dirty cop”, but even if they don’t, the characters are good enough and the larger plot is interesting enough to survive a few lackluster mysteries. Even VMars had an episode about missing dogs, for crap’s sake. And it was really, really bad.

There’s also a bit of Buffy thrown in, with Liv getting some freaky WWZ-style powers when she goes “full zombie”, a bit of Psych, since Liv has to pretend to be psychic for her cop partner (who hilariously informs her mid-episode that he’d totally win the zombie apocalypse since he’d shoot his own grandma in the head if she had so much as a scratch on her arm), and a little bit of Pushing Daisies, because dead people, solving murders, and two people who love each other but can’t be together because of death and stuff. Or undeath, in this case.  But by far my favorite was the little bit of Roswell thrown in there, with Liv dousing everything in hot sauce so she could taste it. It may not have been on purpose, but I don’t care. It’s been way too long since I’ve seen otherworldly beings dousing absolutely everything in Tabasco.

Here’s what there is not: angst, social commentary, deep ethical and moral dilemmas, or gratuitous entrail shots. Where The Walking Dead can be exhausting to watch, iZombie is pure fun.

(Here’s hoping they fix her make-up a little, though, because ain’t no way someone wouldn’t have taken her pulse in the last five months, and/or run screaming away on the streets. Her color was actually more believable when she dressed up as a zombie to scare children intentionally.)

March 24, 2015 Forgive Me Starbucks, For I Have Sinned
Recent Comments
0 | Leave a Comment
Browse Our Archives
get the latest updates from
Barefoot and Pregnant
and the Patheos
Catholic
Channel
POPULAR AT PATHEOS Catholic
1

The Dangers Coming From the 2021...
A Little Bit of Nothing
Related posts from Barefoot and Pregnant