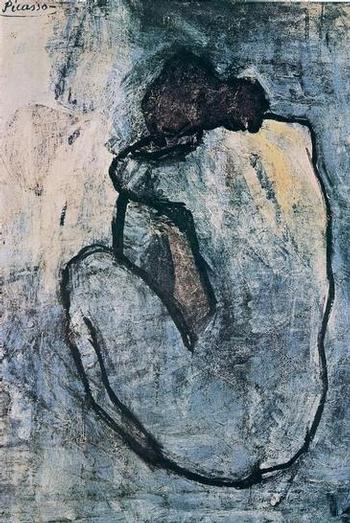 I’m not very good at suffering, not even when it’s for a good cause or on behalf of others. I just don’t like carrying crosses because it’s hard and it makes me feel sad and I’d rather be watching Doctor Who or something. Nevertheless, there are some crosses I carry — like NFP — that I can usually manage to bear with a sense of humor, and sometimes even find the good in them.

Then there are the other crosses. The ones that are the hardest to bear are also the ones I am unwilling to share with others, because they are so exquisitely embarrassing. Everyone needs a Simon of Cyrene once in a while, after all — but if you’re too ashamed to ask for help, no one will know it.

The other day, my neighbor came over to return a bowl. She asked how I was doing (probably since my face looked like I had been crying for four hours, when really it was only three) and I started to say, “Oh I’m fine, just tired”. But instead I said, “not good. I’m really depressed,” and then I started crying all over again. We talked for a few minutes about depression and the logistics of dealing with it in pregnancy, and then she said, “I don’t know why you’ve been given this cross to carry.” Right then, I knew why. It was like she’d asked a question that I already knew the answer to, only I didn’t know I knew it until she asked.

Earlier that day, I sat at my computer and typed up a request for prayers in a secret group. I hate asking for prayers, but I especially hate asking for prayers when I’m embarrassed that the situation has gotten so dire that I need them. But it had, and I was desperate, and even though I sat there staring at the request for a half hour before I could bring myself to publish it, I still felt like I was going to throw up immediately afterward. I almost took it down, but someone had already commented and it was too late.

I spent the next twenty minutes feeling sick and shaky every time I got a new notification, because it meant that someone else had seen. Of course, my friends are amazing people and I received nothing but an outpouring of compassion and support. But then someone asked if I had a paypal account so they could help materially and I started panicking, because I needed the help — really needed it — but I was so humiliated at the prospect of accepting it. Before I could make myself copy and paste the link, someone else found the button on my blog — cleverly disguised as a cup of coffee and a funny quote.

This spawned some amusement that my discomfort with accepting help is so deep-seated that I hid my paypal button, and some gentle prodding to just put the button out there, already, because people want to help and I should let them. Advice which is good, but which I have not yet followed, because pride is a terrible, terrible thing.

David Mills wrote a post at Aleteia yesterday that I found profoundly moving. It was widely greeted with disagreement, even outrage — but for me, it meant a lot. There is a great deal of shame bound up in the triple whammy of sucking at NFP, being poor, and being very fertile. Financial struggles are stressful in and of themselves, but when the world is almost gleeful in their condemnation of the irresponsibility of your choice to forego birth control, it becomes a struggle you want to keep secret — one you are ashamed of, because somewhere in your heart you almost agree.

This shame is not always lifted by other Catholics, even those who understand Church teaching. Yesterday a fellow Catholic made this comment regarding Mills’ post:

I think all the emphasis on money, car size, house size and insurance are there to turn people off from having a large family. We aren’t rich but have 4 kids and God willing would have more, and we are not trying for a baby but if it happened, bankruptcy aside, God has always helped us provide, without government cheese.

For me, comments like this are worse than admonitions to get sterilized. Bankruptcy isn’t something my family can brush aside as a far-flung disaster scenario. We are blessed to have a job with insurance, but car size and house size is so far outside the realm of our concerns that it seems like something from a dream. We’ve eaten our share of government cheese as well, and baby 5 might end up pushing us back to it. It’s not delicious like regular cheese is, though. It’s bitter and hard to swallow.

It’s exactly this kind of disconnect that David Mills was pointing at, I think. I appreciated him doing it, because it made it easier for me to write this post. I’m not quite as embarrassed as I would have been before he wrote it.

Depression isn’t something you can see from the outside, and neither is financial hardship. They are crosses that I want to hide, and pretend I don’t have to carry. I’m ashamed to carry them, because part of me believes that if I were better, stronger, more faithful, more disciplined, or somehow more beloved by God, I wouldn’t have to carry them at all. Part of me thinks it’s all my own doing, that I’m not carrying a cross but suffering the consequences of generally sucking at life. That part of me blames myself, not only for being bad at carrying these particular crosses, but for having to carry them at all.

There’s a twisted kind of pride in there. These are crosses for the weak and the poor, and I don’t want to count myself among them. I want to be better than the weak and the poor, and perhaps I think that I am. Perhaps that’s why I fight so hard against these crosses instead of having the humility to just bear them when I can, and ask for help when I can’t. Truly bearing them would mean accepting that that I am both weak and poor. Asking for help would mean acknowledging it.

But I am weak, and I am poor. God is merciful enough to let me bear these crosses literally, because they are helping to free me from the shackles of my pride.  I don’t want to suffer like this — it feels unfair. I often feel that I shouldn’t have to force myself to get out of bed, that I shouldn’t have to put things back in the grocery store. Like a child, I want to stamp my foot and scream, and sometimes — like a child — I do.

It isn’t unfair, though. It’s just hard, and I’m not a special snowflake that ought not suffer hardship. I’m a human, a woman, a sinner, and a child of God — no better or worse than any other on the planet. These crosses were fashioned for me out of mercy, that I might learn through suffering that I am weak and poor, and that I might learn through charity that I am loved, nevertheless.

November 9, 2015 How the Light Gets In
Recent Comments
0 | Leave a Comment
"So what you're really saying is that you use NFP because you don't want to ..."
Naters The Super Suckage of NFP
"I'm sorry, but planning pregnancy involves using birth control. did you miss that memo?"
leesa maire All Parenthood is #UnplannedParenthood
"Without knowing that God has a purpose for everything, my sufferings in life would be ..."
Jim J. McCrea Sentimental Claptrap, Part V: God Has ..."
"Has the photo been changed? Because what's at the top right now is photo of ..."
Evelyn Sex Breasts and Babies
Browse Our Archives
get the latest from
Barefoot and Pregnant
Sign up for our newsletter
POPULAR AT PATHEOS Catholic
1