I did an Olympic-distance triathlon this morning, and it’s left me pretty exhausted… body and mind alike. (I hit all my goals, ambitious things like “don’t die” and “finish.”)

Historiography is the study of how history is written. For many people, history is simply “the facts about the past,” but history and history-writing is, in fact, far more complex than that. The history writer inevitably shapes the story told, sometimes in obvious and explicit ways, other times not. In the Bible, scholars have to carefully uncover the mind(s) behind the text. In the Book of Mormon, Mormon makes it much more transparent. Even when you have “facts” the facts you choose to include and leave out, what you deem to be relevant, and the line you use to connect your chosen dots, means that you can sometimes tell very different stories with the same facts.

Combine that with the fact that in the ancient world, reading and writing were generally very difficult, costly, and limited-use skills to acquire. The details that are included, then, are likely to be significant, not merely the casual jottings like 8-yr old me, when told to write in my journal.

When we come into Alma 25, we read a story we’ve already read, but told from a different perspective. Alma and Amulek had been preaching in Ammonihah, where they were put in prison, and converts burned to death. In Alma 16:1, Mormon specifies that “there having been no wars nor contentions for a certain number of years” (Alm 16:1 BOM). Why does Mormon include this detail? It means that when the Lamanites come out of the blue and destroy Ammonihah in 16:2-3, there is no earthly cause. I think that implicit there is that we are to understand that Ammonihah reaped what it had sown, and the Lamanites were the tool of God’s justic. That’s how Mormon shapes the story in chapter 16.

However, when we get to chapter 25, Mormon tells the story a different way. Recall that Ammon had preached and converted many people, who took on the name of Anti-Nephi-Lehis (or ANLs for short). Their conversion had sparked a civil war of sorts, leading to an attack on the ANLs. The ANLs, however, did not fight back. Mormon says that ” those Lamanites were more angry because they had slain their brethren; therefore they swore vengeance upon the Nephites; and they did no more attempt to slay the people of Anti-Nephi-Lehi at that time. 2 But they took their armies and went over into the borders of the land of Zarahemla, and fell upon the people who were in the land of Ammonihah and destroyed them.” Mormon certainly knew this when we was writing chapter 16. But he shaped it to show that there was  no human causality for the destruction of Ammonihah. Here in 25, though, we see exactly the chain of events that leads to Ammonihah’s destruction.

Now, there may be more behind the Lamanite reasoning to stop attacking the ANLs and attack Ammonihah instead. Warriors or prisoners captured in battle have a value and purpose that non-combatants (people who don’t fight back) do not have. (This from a Brant Gardner lecture here, thanks Rick!)

The Book of Mormon in these chapters also has some things to say about conversion, deconversion, and reconversion. (I know these notes are abbreviated, but they’ll have to do for now.)

What were the characteristics of each group that led to their situations of conversion or deconversion?

After deconversion, there can still be reconversion– One Amulonite, Alm 23:14 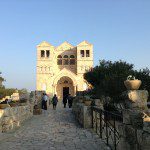 July 13, 2016 New Testament Conference Announcement
Recent Comments
0 | Leave a Comment
Browse Our Archives
get the latest from
Latter-day Saint
Sign up for our newsletter
Related posts from Benjamin the Scribe