Today we continue the war chapters, and get to read some military correspondence. I don’t have any overarching, connecting commentary here, so I’ll start with a rough outline and then individual verses.

Alma 56- Epistle from Helaman about 2000, cities retaken by  stratagem, not a single one lost.

Alm 53:17 Contrast the pacifist covenant of the 1st generation’s (Alma 24:12-16) with the covenant of their children  – “they would fight in all cases to protect the Nephites and themselves from bondage.” What kind of lesson or moral is legitimate to extract from this comparison? Are the specific circumstances of both the parents (repentant killers turned pacifist and in turn slaughtered) and the children general enough to allow for general lessons about the morality of war, pacifism, “just war,” and so on?

Mormon greatly admires the courage and spirit of Captain Moroni. He praises him so extravagantly at Alma 48:11–18 that any subsequent criticism would be inconsistent. Nevertheless, there are indications that Moroni had his faults and could have been a difficult man to work with —or at least this is the conclusion that readers can draw for themselves from reading his letters reproduced at Alma 54 and 60. In the former letter, it is hard to see how the accusation “thou art a child of hell” (54:11) might have been a successful opening for negotiations, and in the latter Moroni claims (inaccurately, as it turns out) a revelation suggesting that the governor has “transgress[ed] the laws of God” and needs to repent of his “sins and iniquities”….

[In the war chapters]  we see Moroni at war—defending, maneuvering, strategizing, threatening, and attacking. We could cite several passages where his actions seem questionable. During a lull in the fighting he clears out Lamanite villages and establishes fortified cities in their stead (Alma 50:7–16), a particularly aggressive form of keeping the peace, which seems contrary to the articulated ideal of engaging only in defensive warfare (Alma 43:46–47, 48:14). (This is the moment that Mormon, somewhat jaw-droppingly, pronounces to be the happiest in all of Nephite history; see Alma 50:23.) At one point Moroni slaughters some four thousand of his political opponents, thus “breaking down the wars and contentions among his own people, and subjecting them to peace and civilization”(!) (Alma 51:17–22). His negotiating skills are a bit weak….

On the other hand, there are also instances where Moroni can be seen giving quarter to his enemies (Alma 52:37, 55:18–19, 62:16–17, 27–29) and proving that he was indeed a reluctant warrior (Alma 48:22), one who “did not delight in bloodshed” (Alma 48:11, 55:19). Mormon seems quite sincere in his admiration of Captain Moroni, even though his account of the Amalickiahite Wars is uncharacteristically secular. God and religion are mentioned in the quoted letters, but hardly at all by the narrator, who seems content to explain causation in naturalistic terms. Perhaps this is the respect of one professional soldier for another. Whatever success the Nephites have at this time is credited to Moroni’s skill as a general. If his blunt manner, quick temper, aggressive posture, and hasty suspicions would have made him a poor missionary, they are nevertheless qualities that serve him well on the battlefield. (Even so, Mormon’s account glosses over the fact that under Moroni, the Nephites lost a whole string of heavily fortified cities, including, for a time, the capital Zarahemla itself; Alma 51:11, 22–28, 52:12.)- Grant Hardy, Understanding the Book of Mormon, various pages.

Alma 56:28 Wives and families appear to travel with the army. That presents its own hardships over separation. Does war do anything good to families?

Alma 56:52 Although we’re in the middle of a letter written by Helaman, we suddenly switch to talking about Helaman in the 3rd person. Is Mormon doing some editing, filling in the gaps?

Alma 60:2– Cimeter= scimitar, and curved swords are right at home in the ancient Americas.

60:7, 11,21- “Can you think to sit upon your thrones in a state of thoughtless stupor… Behold, could ye suppose that ye could sit upon your thrones, and because of the exceeding goodness of God ye could do nothing and he would deliver you? Behold, if ye have supposed this ye have supposed in vain….  Or do ye suppose that the Lord will still deliver us, while we sit upon our thrones and do not make use of the means which the Lord has provided for us?”

I’ve applied this before in a few ways. It seems that God is quite reluctant to do for us what we can do for ourselves, especially when a) he has already provided us the means to do, and b) stepping in would deprive of the growth that comes from experience. This is almost anti-Calvinist rhetoric in a military setting; you can’t just do nothing and depend on God for deliverance, you have to act!

In quite a different light, I’ve used it in terms of scripture study and resources. (I cite it in my article here, listing of Old Testament resources here, and blog post here.) God has given us all kinds of fantastic tools and resources to study scripture, and most of us ignore them. We do not make use of the “means the lord has provided for us.”

Although there don’t seem to be any literary allusions here, this is the problem of both Deuteronomy (“If you are righteous, you will live and prosper”) and Job’s friends (“If bad things are happening to you, it’s because you deserve them.”) In the long long term, I believe Deuteronomy. But in the individual and short term, often times bad things happen to good people. Like Job, Moroni warns against justifying the misfortunes that befall people as divine justice.  (If you haven’t read it, Michael Austin’s LDS treatment of Job is a fantastic combination of readable scholarship and practical discipleship. I know a Stake President who bought copies for his counselors and High Council, and a mother who found it a strength in providing end-of-life care to her daughter’s ex-partner with cancer, who had been cut off by her own parents.)

These passages offer two examples of repunctuating which changes the sense.

47 Now they never had fought, yet they did not fear death; and they did think more upon the liberty of their fathers than they did upon their lives; yea, they had been taught by their mothers, that if they did not doubt, God would deliver them.
48 And they rehearsed unto me the words of their mothers, saying: We do not doubt our mothers knew it.

“We do not doubt. Our mothers knew it.” (We warriors don’t doubt at all, and our mothers sure as heck knew that we stripling warriors have no doubt.)

Alm 54:24  There is a marked difference between

“Behold, now I am a bold Lamanite.”

“Behold now, I am a bold Lamanite.”

The latter uses “now” as a filler word. The former emphasizes Ammoron’s socio-religio-political conversion: now, he is a bold Lamanite. Grant Hardy is the one who noticed this, in this short article.

Alma 57:21 “they did obey and observe to perform every word of command with exactness; yea, and even according to their faith it was done unto them”

How well does a military model of command, execution/implementation map onto a gospel setting of discipleship? Does it presume full details in every divine directive, and is that the same as “micromanaging”?  Does that undercut spiritual development? How does it relate to D&C 58:26-28?

“it is not meet that I should command in all things; for he that is compelled in all things, the same is a slothful and not a wise servant; wherefore he receiveth no reward. 27 Verily I say, men should be anxiously engaged in a good cause, and do many things of their own free will, and bring to pass much righteousness; 28 For the power is in them, wherein they are agents unto themselves. And inasmuch as men do good they shall in nowise lose their reward. 29 But he that doeth not anything until he is commanded, and receiveth a commandment with doubtful heart, and keepeth it with slothfulness, the same is damned.” 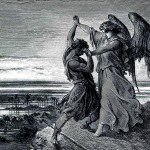 September 3, 2016 BoM Gospel Doctrine Lesson 33: Helaman 1-5 Notes and Questions
Recent Comments
2 Comments | Leave a Comment
"I just completed reading your paper The Israelite Roots of Atonement Terminology. Thank you for ..."
Minette Ngalu Gearing Up For Isaiah
"Even if the Gospels are eyewitness accounts, they are definitely not reliable sources. See here:https://lutherwasnotbornaga..."
Gary M Brief NT Introduction and Gospel Doctrine ..."
"Ben. A couple of comments on your references: ANYTHING by Raymond Brown is excellent. The ..."
CalSailor Virtual Sperry Fireside On Reading the ..."
"This is a great move! Looking forward to using your new website ."
DeAnn Spencer We’ve moved!
Browse Our Archives
get the latest from
Latter-day Saint
Sign up for our newsletter
Related posts from Benjamin the Scribe