As always, there’s a lot going on in these chapters.

First, and majorly, is the issue of Second Isaiah. Much scholarship, dating back a few hundred years, recognizes that Isaiah 39 onwards differs markedly from the preceding chapters. It differs in terms of setting (Babylon instead of Assyria, which means a jump forward of 150 years), assumptions, theme, tone, and vocabulary. They’re not a complete break, but it’s significant enough that most scholars have concluded what scholars tend to conclude; When there’s a sharp sustained change, break, or a contradiction of some kind in the text, it likely indicates a different source or author. Hence, we have Isaiah and then Second Isaiah, writing after the time of the Babylonian destruction. Obviously, there are some assumptions at play here, which I find to be mostly reasonable, most of the time.

At times in this history of interpretation, another assumption has been at play, expressed in the extreme as “prophecy doesn’t really exist, so obviously the author who talks about Cyrus must be contemporary with Cyrus.” That’s not really a major point of most scholarly arguments today, but it’s occasionally there in the background.

A different version of this, which nevertheless has the same result, is an idea which I fully subscribe to, and is strongly supported by scripture and current experience.

It is evident that a prophet, contrary to the common meaning of the term today, was very little preoccupied with the future, concentrating his message on the present and on the interpretation of the past.- Alberto Soggin, Israel in the Biblical Period

After all, when’s the last time President Nelson, Monson, Hinckley, Benson, etc. made a lengthy, detailed-by-name prophecy of specific events to occur 150 years from now? That’s simply not what prophets do, at least, not primarily. So from my perspective, although I firmly believe in prophecy, I also take seriously the evidence indicating a very different author. But don’t take that as a firm conclusion.

Isaiah and the Messiah

First, a reminder the English messiah is an anglicized transliteration of Hebrew muh-shEE-ach (that’s a hard -ch like loch or Bach), which is an adjective from the verb mashach, “to anoint, smear” usually with oil. Oil had many functions, some of them ritual (anointing of prophets, priests, and kings) and some not, like smearing yourself with oil for skin care in the hot dry weather. Greek christos is simply a translation of muh-shEE-ach.

Isaiah does talk about a messiah, even naming him. And his name is Cyrus the Persian. Wait, what?

Thus saith the Lord to his Messiah, to Cyrus, whose right hand I have grasped. Indeed, Cyrus is my shepherd and shall carry out all my purpose. (Isa. 45:1 and 44:28)

After the Babylonians destroy the Jerusalem temple in 586, the two southern tribes (remember, the northern 10 were destroyed/relocated 150 years earlier by the Assyrians, contemporary with Isaiah)… as I was saying, the two southern tribes are carried off to Babylon. Roughly 50 years later, Babylon falls to Cyrus, king of a Persian/Mede alliance. He has a very different policy than the Assyrians or Babylonians for maintaining an empire, namely, appeasement. He acknowledges the Israelite God and sends the Israelites home with Persian funding to rebuild the temple. (More will be said about this in later lessons.) You can see why he might be lionized by Jews, and also used later as a type of Christ. If Jesus’ purpose as Messiah was to gather home to Zion, well, that is quite literally what Cyrus does.

As a side note, Cyrus plays into a recent American scandal of sorts. The Hebrew pronunciation of Cyrus is koresh, and the leader of the Branch Davidians in Waco Texas took his name from the two great pre-Messianic figures: King David, and Cyrus the Persian, thereby becoming David Koresh.

Handel’s Messiah draws heavily on Isaiah, sometimes changing the wording slightly. (More on Handel’s Messiah when we get close to Christmas.) Many know the tune and words of Isaiah 40:1 from the KJV, “comfort ye, comfort ye my people.” We tend to misread this, thanks to the archaic English. This isn’t saying, “hey you people, take comfort!” No, it’s a plural command to unnamed third-parties to go comfort God’s people. Just who is being addressed here?

The verbs (comfort, speak, declare) are in the plural, indicating that God addresses not only Deutero-Isaiah but other messengers as well, probably angelic messengers in the heavenly court. As in ch 6 and 2 Kings ch 22, the prophet overhears and to some extent participates in the deliberations of God’s angelic staff.- Jewish Study Bible

Continuing what happened in Isaiah 6, Isaiah remains among the recipients of divine instruction and command, the other recipients being members of the heavenly council. Isaiah is in several ways like an angel. In the general sense, both Gr. angelos and Hebrew mal’ach (neither used in this passage) simply mean “messenger,” whether human or divine. But Isaiah is also literally among the divine beings who receive God’s commands, known in the OT variously as the benei ‘elim/‘el/’elohim or sons of (the) God(s). Later on (such as in the NT), “angel” starts to refer primarily to this class of beings.

Second Isaiah, the Incomparability of God, and… LDS doctrine of Deification?

These chapters hit on a particular theme frequently. Due to the wording and the lack of context, some Protestant readers have interpreted Isaiah to have “prophesied of Mormon blasphemy almost 3000 years ago!” Throughout these chapters, Isaiah II says things like

Isa 43:10 ” believe me and understand that I am he. Before me no god was formed, nor shall there be any after me.”

Isa 45:21 “Who told this long ago? Who declared it of old? Was it not I, the LORD? There is no other god besides me, a righteous God and a Savior; there is no one besides me.”

There are more, but that’s enough. What’s at issue here is the context Isaiah is addressing (which is unstated) and differs significantly from the Gospel as we understand it.

Among the texts and beliefs of the Israelites’ neighbors, it was not uncommon for one god to “get old” or be replaced by some new upstart deity. Yahweh here is saying, “that’s not going to happen.”

And as odd as it may seem, this language isn’t actually a denial of the existence of other “gods” in the Hebrew way of thinking. What Isaiah is asserting is not that they don’t exist, but that they can’t do what the God of Israel does; they can’t save, they don’t create, they are powerless! (These assertions are found throughout.) So… if these others can’t do any of those things,  why worship them? The God of Israel is incomparable!

Isaiah’s “denial statements” express incomparability, not non-existence of other gods (Isa 43:10–12). Similar language is used in Isa 47:8, 10. Babylon claims, “I am, and there is none else beside me.” The claim is not that Babylon is the only city in the world, but that it has no rival.

A close reading of Deuteronomy and Isaiah shows the denial language’s context. The denials are not based on any claim that other אֱלֹהִים (elohim) do not exist, but on Yahweh’s unique qualities. In Isaiah 43:10–12, the reference points are Yahweh’s pre-existence, ability to save, and national deliverance. In Isaiah 45, the focus is on Yahweh’s justice, salvation, the deliverance of His children, and the impotence of the other gods. Yahweh is being compared to lesser gods—it would be empty praise to compare Him to beings that did not exist.- “Divine Council,” Lexham Bible Dicttionary

So, does this have anything to do with the LDS doctrine of becoming like God and sharing in his divine nature? Not really. We’re not replacing the God of Israel, nor competing with Him in any way whatsoever like the Canaanite or Babylonian gods did. Although D&C says Abraham has received his glory, I can’t pray to Abraham for forgiveness of my sins or whatnot, it doesn’t work that way. So, yeah, you can twist Isaiah into an argument against Mormonism, but that’s not really what Isaiah is saying at all. 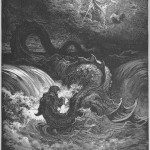