I have more thoughts on group and family study to supplement replace our lost hour of Church, but in the meantime, this post (originally 2011, reposted last year) might be helpful.

I plug modern Bible translations one way or another in virtually everything I write and teach. Now that you have two or three translations, how do you integrate them into your family study or teaching? Here’s one suggestion.

Our family of two is not very large, so schedules aren’t hard to coordinate. We’re both active in the Church, and bibliophiles who regularly read and study our own scriptures,  and yet we’ve never been able to have productive scripture study together. I am largely to blame for that, since our questions and interests tend to not overlap very much and mine are too arcane and rabbit-hole-ish to be productive for her. In spite of trying several times, it’s never lasted long.

I have memories of my teens, bleary-eyed hot breakfast at 5:15, slogging through Alma, taking turns reading in between bites of Hutterite pancake with whipped cream, bananas, and maple syrup. We read every day, but I never felt conscious enough to really pay attention, especially since I was competing with three brothers for pancakes. (My older sister wasn’t very competitive in the pancake-horking department.)

Somehow between hearing scripture read at breakfast and zombie attendance of four years of Really Early Morning Seminary in the winter wasteland of Minnesota, I learned enough through osmosis that my MTC group designated me the “scriptorian” of the group, thoroughly dismaying me as to how little one needed to know to earn this title. Regardless, I was convinced at that point that group scripture study had value. If I with so little grey matter devoted to paying attention could learn simply by being there, what could you accomplish if you actively engaged with the text and co-readers?

This week, with the arrival of my Jewish Annotated New Testament edition of the NRSV, we have begun anew.  Hope springs eternal, right? One person reads out of the KJV while the other follows along in the NRSV; after a few verses, we switch, and talk about what stands out from the differences, whether textual (phrases missing or added) or translational, and any questions that arise.

If we had kids, I think we might try giving everyone a different translation, but still reading out loud from the KJV. The advantage to following along in a different translation is that when you’re not reading out loud, you’re still engaged and paying attention to the text, mentally comparing it to what you hear. So far, we both like it and we’ve had some good conversation. One unexpected bonus is that reading this way actually makes you more aware of what the KJV says than simply reading through it on its own. I do think it’s important that youth get to know the KJV language, and this accomplishes that while also providing understanding.

When I’ve done this in Gospel Doctrine class, I usually preface it with something like “the way the KJV translates is lost a little on modern readers, so I’m going to read from a modern translation to illustrate. Follow along in the KJV while I read.” But your mileage (and Gospel Doctrine class!) may vary. Generally, I don’t do this for every passage, since I don’t want to give the impression I’m replacing the KJV as much as supplementing it. But where the antiquity of the KJV language misleads us, or  hides its oomph (see also here), or newer textual sources or Semitic understandings are better reflected in newer translations, I’ll supplement publicly for our edification and learning.

September 30, 2018
The Future Faith of Our Seminary Students
Next Post 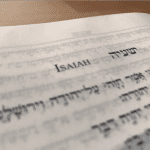 October 13, 2018 Old Testament Gospel Doctrine Lesson 38: Isaiah 40-49
Recent Comments
2 Comments | Leave a Comment
"I just completed reading your paper The Israelite Roots of Atonement Terminology. Thank you for ..."
Minette Ngalu Gearing Up For Isaiah
"Even if the Gospels are eyewitness accounts, they are definitely not reliable sources. See here:https://lutherwasnotbornaga..."
Gary M Brief NT Introduction and Gospel Doctrine ..."
"Ben. A couple of comments on your references: ANYTHING by Raymond Brown is excellent. The ..."
CalSailor Virtual Sperry Fireside On Reading the ..."
"This is a great move! Looking forward to using your new website ."
DeAnn Spencer We’ve moved!
Browse Our Archives
Related posts from Benjamin the Scribe