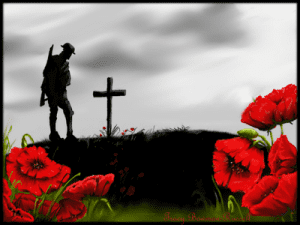 Remembrance Day is how Canadians acknowledge November 11th.  In the US it is Veterans Day.  These observances evolved out of Armistice Day, which continues to be observed in some countries (or simultaneously.)  There are commonalities but the focus is different.  Our identity of ourselves as a nation came from fighting together in World War I.  At that time, Canada was still a British colony, and most of us thought of ourselves as British (or French, under British occupation).  We became Canadians together at Vimy Ridge and Passchendaele.

Certain things have become custom on Remembrance Day.  We observe two minutes of silence to honour the dead at exactly eleven o’clock.  We wear poppies pinned to our coats or hats – hearkening back to Flanders’ Fields – that represent the blood that was spilled.  We have a cenotaph in almost every town to acknowledge our local war dead, and we gather at the cenotaph and have a parade of our surviving veterans and our emergency service personnel, and then we lay wreaths for the dead (usually donated by some organization or another) and say a prayer (usually a Christian one; but let’s face it, most of the WWI and WWII soldiers were Christians); and then we observe the silence and we go on our way.

We tend to take it pretty seriously and for us, it’s a solemn occasion.  It’s a funeral for a generation.  No one would tolerate Remembrance Day sales (as a matter of fact, that’s been tried) or things like what I saw on the most recent episode of the Voice, in which Starbucks used the occasion of Veterans Day as an opportunity for self-promotion.

Another odd phenomenon that I think my American readers might have difficulty understanding is that our most recent war veterans don’t think of themselves as “real vets.”  I have a friend who is a Heathen named Graeme.  He’s done two tours in Afghanistan. He drove a tank through landmines and had mortars shot at him; a combat vet by anyone’s definition.  But he believes in his heart that his experience was nothing compared to the experience of the survivors of the World Wars, so he doesn’t have the veteran’s license plate he’s entitled to, doesn’t use any of the discounts, and “stands cenotaph” every year so that he doesn’t have to march because he feels ridiculous.

For the past several years my city has been doing their Remembrance Day ceremony at the local big arena, only laying the wreaths at the cenotaph when the ceremony is done.  And we (we being myself and my partners) don’t think that’s right.  If there are ghosts of the dead to respect, they are at the cenotaph, not the arena.  I’m not sure why the city decided to do this; my guess is that either there were too many people to fit in the cenotaph’s small park coming to the ceremony, or that the aging veterans had difficulty marching in the rain.

Whatever the reason, my family and I go to the cenotaph on November 11th to honour the two minutes of silence at eleven o’clock.  And we are not alone.  Last year when we went, we found people trickling in from all over town as eleven o’clock neared.  Someone announced that it was eleven when they saw the time on their cell phone; we all took our hats off and stood silently for two minutes.  When it was done, we removed our poppies from our clothing and, one by one, left them at the base of the cenotaph where the wreaths would later appear, and left as quietly as we had come.

Being Pagans, my family and I also bring an offering for the dead of rum, bully beef, and various tobacco products; which would have been a great day for a fighting soldier.  We leave this at the base of the cenotaph where the poppies go.

Secondly, it is entirely motivated by a sense of what should be done; by what feels like the right thing.

Third, it draws upon the existing cultural symbolism.  As Canadians – indeed, as members of the Commonwealth – we collectively recognize that a red poppy symbolizes the blood and sacrifice of a soldier; and that our soldiers are us.  We’re taught about this as very young schoolchildren; I remember being six years old and listening to In Flanders Fields being read over the PA before the two minutes of silence were observed.  So it has a real sense of gravitas and of continuity.

Fourth, it does exactly what it needs to do; no more and no less.

This year, the ritual gained something else that made it even more powerful.  Just before eleven, a thin, elderly veteran in his dress greens walked up to the base of the cenotaph and quietly began to speak.  The people gathered as if drawn by a magnet to listen.  Even the city busses pulled up and emptied of their drivers and their passengers, who came to join us:

For me, something like this will always have more power than something big and elaborate and expensive.  A simple rite that addresses the needs of the celebrants, and speaks to their most potent symbolism, meets a basic human need.  But then again, I suppose that’s why I’m a Witch.

I hope you had a great Remembrance Day, or Veterans Day, or whatever it is that you observe.  Lest we forget. 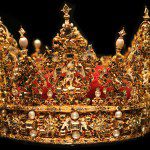 November 10, 2014
Seekers and Guides: The Royal Visit
Next Post 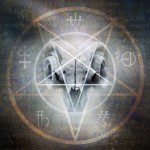 November 15, 2014 Wicca: A Syncretic Faith
Recent Comments
0 | Leave a Comment
"Take heart, Woods! I think people are finally angry and scared enough to get their ..."
Sable Aradia Dear Greta Thunberg
"You did make a difference, as did the Baby Boomer generation (who first brought attention ..."
Woods Wizard Dear Greta Thunberg
"I really like your text. I am happy to note that on the other side ..."
Seren The Star Goddess
"Very spot on review of Circe. This was one of the few books I read ..."
Michelle Gillian Pagan Book Review: Circe by Madeline ..."
Browse Our Archives
Related posts from Between the Shadows