Reading and Writing in Jesus’ World— Was he an Illiterate Peasant? Part Two 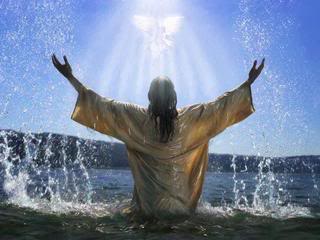 It is a too little known fact that Greek speakers were everywhere to be found in the world of Jesus. For example, take the coastal towns in Israel—Gaza, Azotus,Ascalon,Joppa, Dor. All of these cities were largely populated by Greek speakers, including Greek speaking Jews. Herod settled his foreign veterans in the town of Gaba northeast of Mt. Carmel and rebuilt Strato’s Tower on the coast. Samaria, the town, became a Greek city when Alexander settled some of his mustered out Macedonian troops there, and it was used again for this purpose by Herod, who settled foreign troops there— Greek speakers.

Even in small places like Marisa, a town in the Judean foothills northeast of Lachish, the city was populated by Idumeans like Herod, and Greeks, and people from Sidon. The excavations in that town show numerous Greek inscriptions, including burial inscriptions. We tend to forget that at first Israel was under the control of the Roman province of Syria, before the Herods did their thing, and thanks to the Romans Greek replaced Aramaic as the language of administration in the region, including even in Judea during the reign of Pilate. We see this official use of Greek in a stone slab at Scythopolis. Millard concludes “By the end of the second century BC, therefore when the Jews had their own state based on Jerusalem, Greek was firmly entrenched.” (p. 107). He adds “When King Herod took power, he had his name and title stamped in Greek only on the coins he issued, and his sons did the same for the different parts of Palestine they ruled. When Rome took control in Judaea, Greek only was stamped on the small bronze coins the Roman governors issued.”

The coins the priests in Jerusalem required every Jew to pay the annual temple tax with, the Tyrian shekel and half shekel had the Greek inscription–‘of Tyre, the holy place and sanctuary’. Even the weights used by Jews in Jerusalem were marked in Greek– one reads ‘Year 32 of Herod the King, pious and loyal to Caesar. Inspector of markets, 3 minas’ (p. 108 Millard). The same sort of thing was found near Tiberias reading ‘under Herod the tetrarch, 34 Gaius Julius the inspector of markets, 5 talents’.

Greek also circulated not merely on coins and weights and inscriptions, but in theater tickets, on amphorae jars of wine, in public notices, etc. There are numerous ossuaries as well from the Jerusalem region with some inscriptions in Aramaic, some in Greek, some in both, and from the same tomb as well. Of particular interest for Gospel studies is the ossuary found marked Alexander of Cyrene in Hebrew, and Alexander son of Simon’ in Greek, which may well refer to one of the sons of Simon of Cyrene (see Mk. 15.21;Rom. 16.13).

Or consider the famous first century A.D. Theodotus inscription written in beautiful Greek, recording the rebuilding of the synagogue and adjoining rooms by one Theodotus son of Vettenus. 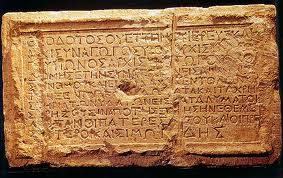 If we turn for a moment to the Qumran scrolls, what was found in that Cave 7 full of Greek fragments? Firstly, copies of the OT books in Greek. But secondly, also portions of little known extra-canonical documents like the Epistle of Jeremiah, parts of the book of Enoch, and in a cave further south, a Greek copy of the minor prophets was found.

South of Qumran are caves where there have been lesser known finds. For example, the archive of the lady Babatha containing 35 papyri written between A.D. 93-132, of which two dozen are in Greek. There are deeds of gift,marriage contracts, court documents, letters,sale documents. Both business and literary Greek documents (Millard p. 115). Even from Masada, we find potsherds marked in both Greek and Hebrew letters, which apparently were used as tokens. Millard concludes—-
“the attested presence of Greek in Palestine from the third century BC onwards and the variety of texts available from the Herodian period implies that there were few parts of the country where some knowledge of the language could not be found. The land is small and there was a lot of travel…so Aramaic speaking Jews easily met and mixed with people who used Greek in many cases living side by side. In towns and villages the activities of pedlars and merchants, tax collectors and government officials, Herod’s foreign troops, Roman legionaries would often demand enough Greek from the local people for market-place negotiations. Even where there were determinedly Hebrew or Aramaic speaking communities, they could not isolate themselves from all contact with Greek, as the Greek books belonging to the strictly religious community who owned the Dead Sea Scrolls demonstrates.” (p. 117).

Of what import is this to our discussion of Jesus and his languages and literacy? A great deal. Jesus needed Greek to speak to a variety of people he encountered in his travels— not just centurions either. How would have spoken to a Syrophonecian woman? Perhaps in Greek. How to the residence of the Gerasene region, like the demoniac? Probably in Greek. I could go on. Various of his disciples also needed some Greek, especially a tax collector like Matthew, and also businessmen like Peter would have needed some Greek to do their fish-selling in the border region they lived in. In short, Jesus did not live in a cultural backwater, he lived in a multi-lingual setting. He mostly spoke Aramaic but likely knew some Greek. But was he literate? Our next post will address that directly.

November 2, 2011
Reading and Writing in Herodian Israel-- Was Jesus an Illiterate Peasant? Part One
Next Post

November 4, 2011 Was Jesus Illiterate? Part Three
Browse Our Archives
Related posts from The Bible and Culture