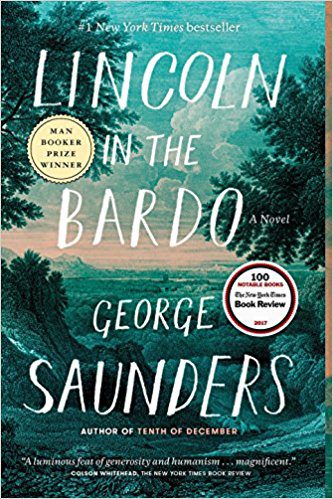 We must start with saying this is one of the oddest, and most creative books I’ve read in a long time. Kudos to my son for finding it and sending it to me for Father’s Day. It is one part historical reflection on Mr. Lincoln and his grieving over the loss of his son, the day Willie died, and the next day. On the other hand, it is rather like walking into a seance when apparently the spirits of many of the dead are present and speaking. Spooky. The main speakers in the novel are in fact a couple of ghosts named Vollman and Bevins. And all kinds of weird and wonderful reflections can be found in their commentary, not to mention various bawdy remarks and descriptions as well. It seems these ghosts have not yet reached their final destination and do not fully realize they are dead. Indeed Willie Lincoln has to pronounce the awful truth. They had been lingering between death and their final destination. Which brings us to the term bardo….. here is the definition….

bardo: noun (in Tibetan Buddhism) a state of existence between death and rebirth, varying in length according to a person’s conduct in life and manner of, or age at, death. One of the things that makes this novel both intriguing and strange is the admixture of Christian views about the afterlife, with other views. There is even a scene where people appear before the bema seat judgment of Christ, to hear where their final destination in the afterlife will be. And then there is the use of the interesting terminology—- matterlightblooming phenomenon, used to refer to the occasion when one passes from being in limbo to entering one’s final eternal state. This book won the Man Booker Prize for fiction, and it is certainly quite original but the reviewers who thought it was completely ‘novel’ are not correct. It bears rather striking resemblances to some of Dante’s classic The Divine Comedy, particularly the first two books Inferno, and Purgatorio. Here is the summary on Amazon about this 350 or so page book.

“February 1862. The Civil War is less than one year old. The fighting has begun in earnest, and the nation has begun to realize it is in for a long, bloody struggle. Meanwhile, President Lincoln’s beloved eleven-year-old son, Willie, lies upstairs in the White House, gravely ill. In a matter of days, despite predictions of a recovery, Willie dies and is laid to rest in a Georgetown cemetery. “My poor boy, he was too good for this earth,” the president says at the time. “God has called him home.” Newspapers report that a grief-stricken Lincoln returns, alone, to the crypt several times to hold his boy’s body.

From that seed of historical truth, George Saunders spins an unforgettable story of familial love and loss that breaks free of its realistic, historical framework into a supernatural realm both hilarious and terrifying. Willie Lincoln finds himself in a strange purgatory where ghosts mingle, gripe, commiserate, quarrel, and enact bizarre acts of penance. Within this transitional state—called, in the Tibetan tradition, the bardo—a monumental struggle erupts over young Willie’s soul.

Lincoln in the Bardo is an astonishing feat of imagination and a bold step forward from one of the most important and influential writers of his generation. Formally daring, generous in spirit, deeply concerned with matters of the heart, it is a testament to fiction’s ability to speak honestly and powerfully to the things that really matter to us. Saunders has invented a thrilling new form that deploys a kaleidoscopic, theatrical panorama of voices to ask a timeless, profound question: How do we live and love when we know that everything we love must end?”

A found it a bit humorous that the reviewers also suggested that the combination of serious historical research coupled with fictional narrative and characters makes the novel unique. Not quite. That’s what I’ve been doing for a while with our Week in the Life series for IVP. But it does not matter. While there are some off-color scenes in this novel, on the whole it has some interesting and profound reflections on life, death, the afterlife, grieving the unexpected loss of a child, and much more. And one has to say that George Saunders is a very skillful writer, even able to mimic the Victorian style of speech favored in the middle of the 19th century by some, as well as various other forms of dialect speaking. And Saunders’ descriptive powers of normal life in that age are quite good as well. Kudos to him for a stimulating read.

July 9, 2018 Just Say No to the Local Option---- Part Two
Browse Our Archives
Related posts from The Bible and Culture

Evangelical
How Not to Interpret the Bible. Part Nine....
The Bible and Culture
TRENDING AT PATHEOS Evangelical